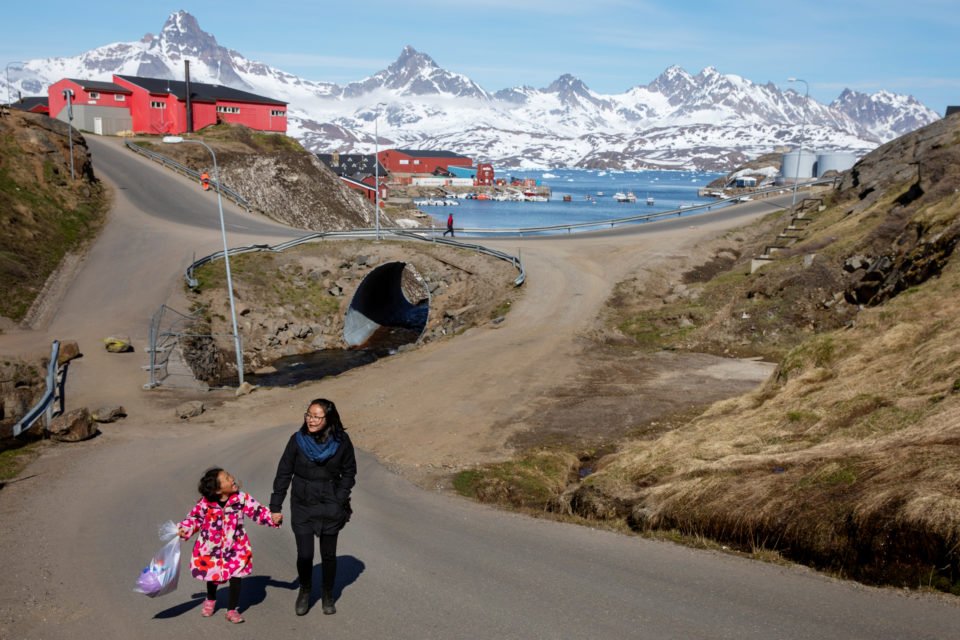 FILE PHOTO: A woman and child hold hands as they walk on the street in the town of Tasiilaq, Greenland

From his purchase of New Jersey casinos to his proposed acquisition of Greenland, Donald Trump’s real estate deals have always been plagued by bad timing. The United States could probably have bought Greenland from Denmark in 1917 (when it did buy the US Virgin Islands from the Danes), but he’s a century too late now.

Nevertheless, his latest bad idea does give us an incentive to catch up with what’s been happening in Greenland, and it’s quite interesting. Trump may not know this, since he rarely reads intelligence reports, but in November 2017 Greenland’s premier, Kim Kielsen, led a government delegation to Beijing to seek Chinese investment.

Greenland, the world’s biggest island, is not yet fully independent, but it is autonomous from Denmark in everything except foreign affairs and defence. Kielsen was looking mainly for Chinese investment in mining enterprises, but he was also interested in attracting a Chinese bid to build three modern airports in the island, which currently depends on World War II-era airstrips.

This set off a security panic in Nato, involving implausible nightmare visions about Greenland getting so deep in debt to Chinese banks that it would end up letting China (which has comically declared itself a ‘near-Arctic nation’) operate military aircraft from those airports.

The US military, which has a large air base at Thule in northern Greenland, then took fright. Washington strongly urged the Danish government, which provides two-thirds of Greenland’s budget revenue, to nip this threat in the bud. Copenhagen had previously refused to fund the new Greenland airports, but late last year it suddenly came up with very low-interest loans for them. End of panic.

By then Kim Kielsen’s government in the tiny capital of Nuuk (pop. 17,000) had collapsed, but his Siumut Party came out ahead in the election last April and he is back in power. And the issue of Chinese mines in Greenland is still on the table.

In fact, there already is one in southern Greenland, producing uranium and rare earths for a Chinese-Australian consortium. Other projects potentially involving Chinese capital (and Chinese workers) are under discussion, including a huge open-cast iron-ore mine near Nuuk, a zinc mine in the north, and both offshore and onshore oil and gas leases.

For the 56,000 Greenlanders, 90% of whom are Inuit (Eskimo), the geostrategic implications of Chinese investment are irrelevant – and they are probably right about that. What worries them, and occupies a central place in Greenlandic politics, is the cultural and social implications of foreign investment by anybody, Chinese or not.

The Greenland Inuit are one of the few indigenous society in the world that has full or almost full control over its own destiny, but the impact of the modern world on their traditional culture has been as destructive as it was for all the others: depression and other psychological illnesses, rampant alcoholism and drug use, and an epidemic of suicides.

So they face a choice. Do you go on trying to preserve what is left of the old Arctic hunting and fishing culture, although it’s already so damaged and discouraged that it has the highest suicide rate on the planet? Or do you seek salvation in full modernisation through high-speed economic growth, while keeping your language and what you can of your culture?

What’s remarkable about Greenlandic politics is how aware the players are of their dilemma and their options. “If you want to become rich, it comes at a price,” says Aqqaluk Lynge, one of the founders of the Inuit Ataqatigiit (Community of the People) party that ran the government until 2013.

Lynge and many others didn’t want to pay that price, and under the Inuit Ataqatigiit administration all mining was banned in Greenland. Quite apart from the environmental costs of large-scale mining operations, they believed, the many thousands of foreign workers they would bring in would have a devastating impact on the already very fragile Greenlandic culture.

The decision was made in 2013, when the Siumut Party took power. It believes that modernisation has gone too far to turn back now. Better to gamble on solving the current huge social problems by enabling everybody to live fully modern, prosperous lives. If you’re no longer marginalised and poverty-stricken, you’ll feel better about yourself.

As Aleqa Hammond, Kielsen’s predecessor as premier, said in 2014: “The shock will be profound, but we have faced colonisation, epidemics and modernisation before. The decisions we are making (to open the country up to mining and oil drilling) will have enormous impact on lifestyles and our indigenous culture. But we always come out on top. We are vulnerable, but we know how to adapt.”

Let us hope so, but the die is cast. Greenland will modernise, and in due course we will find out if that helps. It makes little difference to Greenlanders whether the foreign investment comes from Denmark, China or the United States, so long as they have political control – but they certainly don’t want to become Americans.

The ‘Greenland Purchase’ is not going to happen. As Soren Espersen, foreign affairs spokesman of the Danish People’s Party, said last week: “If (Trump) is truly contemplating this, then this is final proof that he has gone mad.”