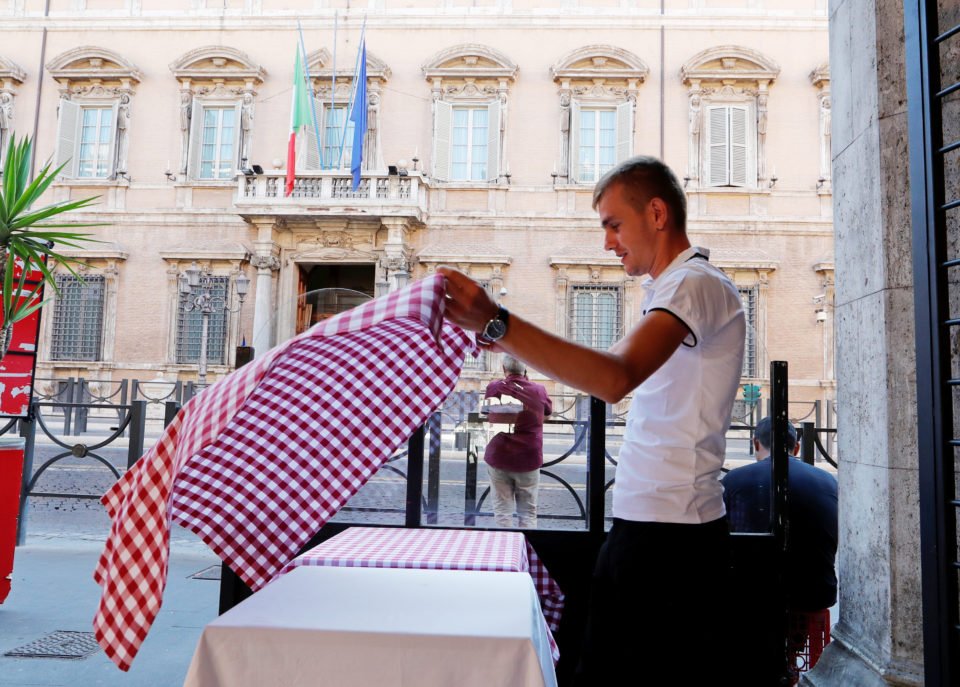 A waiter sets the table in a restaurant in front of the Senate Palace, ahead of a speech by Prime Minister Giuseppe Conte

Elsewhere, euro zone rates fell back towards record lows as markets remained focused on the prospect of fiscal stimulus in Germany and easing by the European Central Bank.

Investors in Italian bonds have been on tenterhooks since the leader of Italy‘s League Party, Matteo Salvini, called for an end to the coalition government on Aug. 8.

Luigi Di Maio, head of the 5-Star Movement, the League’s coalition partners, signalled the imminent demise of the government on Tuesday with a Facebook post thanking Prime Minister Conte.

Salvini also renewed concerns that spending will further strain Italy‘s finances, and in turn its relationship with the European Union. He said on Tuesday a budget of 50 billion euros ($55 billion) will be needed for 2020 to bring about a “shock” fiscal stimulus.

How the turmoil will end is unclear. Possible outcomes include a new government that would push the League back into opposition.

Elsewhere, Finnish central bank governor Olli Rehn said on Monday that the ECB’s Governing Council was determined to act if the medium-term inflation outlook continues to fall short of its target: close to but below 2%.

Hopes for additional stimulus are also growing after reports that Germany is prepared to increase fiscal spending and after the People’s Bank of China took steps to lower corporate borrowing costs.

Analysts also noted that Australia’s central bank discussed unconventional monetary policy at its August board meeting, leaving the door open for further easing. It has already cut rates twice, to 1%.

Minutes of the Reserve Bank of Australia’s Aug. 6 meeting showed it would consider further rate cuts if they were needed to support growth and achieve its 2% to 3% inflation target.

Antoine Bouvet, senior rates strategist at ING, said the central bank’s minutes were the most important news of the day, even though they are not directly related to rates, because of what they say about easing more generally.

“It spells out what the market is implicitly pricing: non-standard measures are difficult to withdraw,” he said. “It is reasonable for rates markets to price those measures remaining a feature for a long time.”

Don’t blame the UK benefit system for all our woes