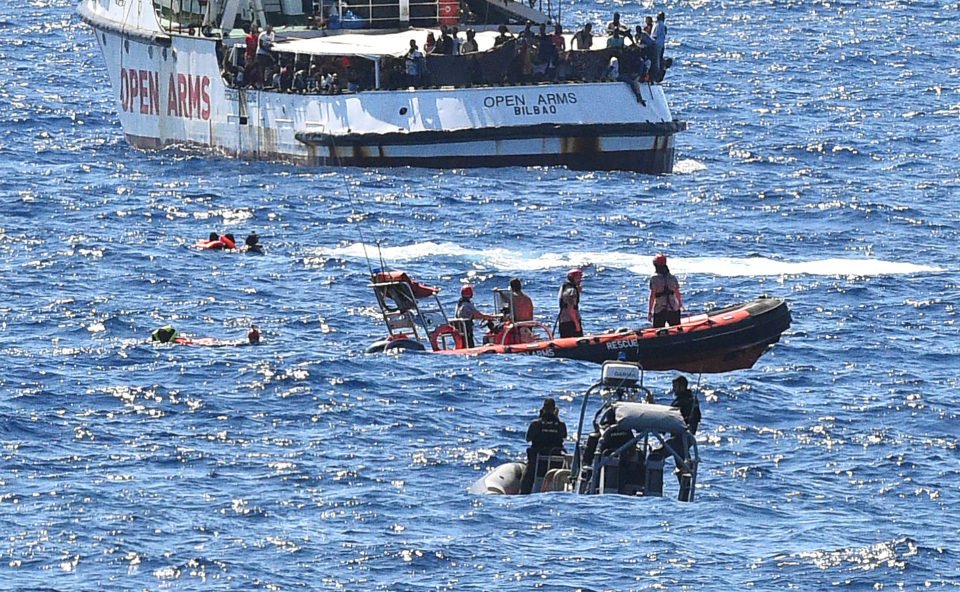 Migrants swim after jumping off the Spanish ship Open Arms

More than 10 of the migrants on a rescue ship stranded off southern Italy jumped overboard and tried to swim ashore on Tuesday as the Spanish charity operating the vessel remained in a stand-off with the Italian government over the migrants’ fate.

The ship Open Arms, at sea for 19 days with almost 100 migrants onboard, has been waiting just off the port of Lampedusa, asking to bring the mostly African migrants ashore despite an Italian ban on private NGO ships docking.

“Nine people have thrown themselves into the water … The situation is out of control,” the Open Arms tweeted, after earlier posting a video of other migrant who had jumped in the water, his way blocked by an Italian Coast Guard boat.

Reuters footage later showed another five people jump. It was not immediately clear if they were all migrants or if some were lifeguards.

The first man overboard, a Syrian, was picked up by Italian authorities, who are caring for him, an Open Arms spokeswoman said. Italian coastguards also went to the rescue of those who jumped later, Reuters reporters saw.

Reuters footage showed a few people being brought to the Open Arms on a small dinghy but it was not clear if they were among the rescued migrants.

Italy has taken a tough line on migrant entry, saying it has borne too much responsibility for handling African migration to Europe. Interior Minister Matteo Salvini says the charity-run ships have become “taxis” for people smugglers.

The charity says the situation on board is desperate and some migrants are suicidal. The passengers are sleeping jammed together on deck and sharing two toilets. Dozens of migrants have been taken ashore since the ship entered Italian waters because they were said to be minors or ill.

Salvini suggested on Tuesday that the charity was exaggerating the problems on board. Of eight migrants taken ashore on Monday night for urgent medical attention, he said, only two had health problems.

“Spanish NGO, Spanish ship, Spanish port: The coherence and strength of Italy has paid off. We are no longer the refugee camp of Europe,” he said in a statement.

The standoff has fuelled Salvini’s campaign against migrant boats from Africa, and comes as he is trying to force Italy into snap elections. The ruling coalition, in danger of collapse later on Tuesday, has split over the issue.

Salvini’s political rival, Transport Minister Danilo Toninelli, who controls the Coast Guard but not port access, has offered to take the migrants on a Coast Guard vessel to Spain, which has offered them safe harbour.

But Toninelli has set a condition – that Madrid de-register the Open Arms ship by removing its Spanish flag. Without a flag, it would be difficult for the ship to continue running rescue missions, its insurance would be invalid and it could be intercepted at any time by a navy or coast guard force.

Toninelli said on Tuesday Italy was still working on a deal with Madrid. “I had a conversation with Spain just now and I expect the Spanish government to respond to our request by doing whatever is necessary to stop the NGO,” he said on Facebook.

Open Arms says it will not sail the migrants to Spain.

“They want to take the flag away from us. The price is very high,” Open Arms’ director and founder, Oscar Camps, said in remarks published by Spain’s El Mundo newspaper on Tuesday.

Camps has ruled out the option of taking the migrants to Spain on the Open Arms ship, saying conditions on board are too miserable for them to endure such a journey.

If a solution is not found, Open Arms has not ruled out the option of defying Italy’s ban and attempting to dock.

Asked if the ship would try and enter the port without permission, the Open Arms head of mission in Lampedusa, Riccardo Gatti, said on Monday, “Yes, it is an option”.

Spain’s left-wing government offered on Monday to allow the ship to dock at a Spanish port, and it and five other European Union nations have offered to take the migrants.

The details of the offers from France, Germany, Romania, Portugal, Spain and Luxembourg have yet to be finalised.