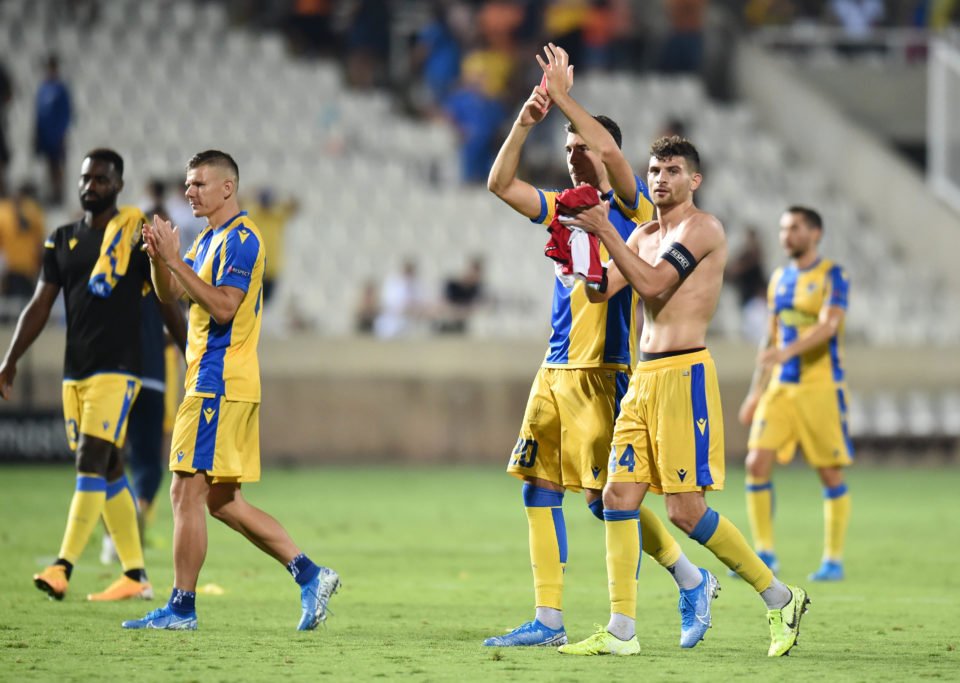 Almost 30 years ago, in November 1979, Ajax came to Nicosia on the back of a 10-0 drubbing of Omonia in the first leg of a European Cup tie to play their return fixture.

To the delight of the home fans, Omonia made world headlines at the time, humiliating the Dutch giants 4-0 at a packed Makarios stadium in front of 20,000 fans.

Before Tuesday’s Champions League playoff first leg qualifier, anything other than a defeat for the home side would have been considered a great achievement.

Giorgos Merkis, a rock at the heart of the Apoel defence, said after the game: “If we were offered a goalless draw before the match we would have taken it with pleasure, but now we feel a bit disappointed we did not win”.

It was truly an impressive performance by Apoel, especially if you take away the opening 10 minutes of both halves where the Dutch set up camp outside the Apoel area.

Though Ajax did have their chances to score as well, it was the gutsy Cyprus champions who missed more and better opportunities and it would be no exaggeration to say that a 2-0 home win would not have flattered Apoel.

One Dutch website went as far as to say that Ajax goalkeeper Andre Onana was their star player.

Apoel’s German coach Thomas Doll, who outfoxed his Ajax counterpart Erik ten Hag, praised his players for sticking to his game plan but at the same time warned them that the return leg at the Johan Cruyff Arena on Wednesday will be much more difficult especially as Ajax will also want to restore their wounded pride.

Ten Hag spoke highly of Apoel saying that they are a very well-organised and dangerous team. However their captain, Ducan Tadic, blamed his side for the scoreline refusing to give credit to Apoel for his team’s poor showing.

Similar comments also came from former Ajax and Barcelona star Ronald de Boer, who defended Ajax’s performance on Dutch site ‘voetbalzone.nl saying that “it was far too early in the season and when you are not at your peak fitness, playing against teams like PAOK (in the previous round) and Apoel is like playing against demolition workers (PAOK en APOEL speel je tegen echter slopers).”

Someone should remind de Boer that Ajax received six yellow cards for the first time in a long time in a European game, as opposed to just two for Apoel.

Ajax are still favourites to go through next Wednesday but judging by Apoel’s first leg performance, they will have to sweat for the right to enter the group stages of the Champions League because Apoel will not go down without a fight.

Cabinet agrees to help owners of collapsed Pissouri homes, but no compensation