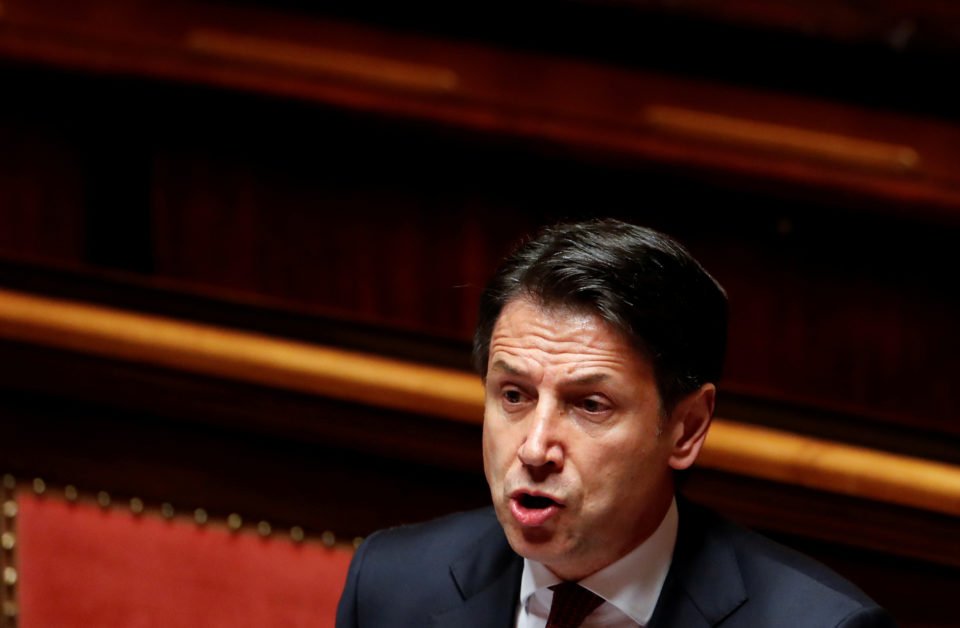 By Angelo Amante and Gavin Jones

– Italy’s centre-left Democratic Party on Thursday set tough new conditions for forming a coalition with the anti-establishment 5-Star Movement, making a deal between the traditional foes look more elusive and raising the chance of snap elections.

The euro zone’s third-largest economy is in political turmoil after its government, riven by months of infighting, imploded this week, forcing Prime Minister Giuseppe Conte to resign just as Rome was to begin preparing the 2020 budget.

The collapse was triggered by the right-wing League party whose leader Matteo Salvini declared the ruling coalition dead, saying he could no longer work with 5-Star, his coalition partner.

Salvini called for elections, aiming to cash in on his surging popularity to return to power as prime minister with a mandate to launch a big spending spree next year and challenge the European Union’s fiscal rules.

However his move could backfire because the head of state, Sergio Mattarella, will only dissolve parliament if no other coalition can be formed, and now 5-Star and the PD are looking at a possible tie-up to sideline Salvini.

Mattarella, who consulted with the main parties in parliament on Thursday, told them he wants a deal within the next few days if they want to avoid snap elections, a source close to the matter told Reuters.

Speaking to reporters after his meeting with the president, 5-Star leader Luigi Di Maio made no reference to the PD but made clear his party was working to avoid elections.

“In recent hours all the necessary contacts have been launched to find a solid (parliamentary) majority,” he said, adding that he had handed Mattarella a list of 10 reforms that needed completing before parliament should be dissolved.

Many of these, ranging from an investment plan for the poor south of the country to legislation on conflicts of interests and to speed up the justice system, have always been among 5-Star’s flagship policies.

Mattarella will issue a statement at 1800 GMT on the outcome of his talks with the parties.

Markets have rallied on hopes that a 5-Star/PD deal was in the offing, dismissing stumbling blocks such as the lack of any agreement between the parties over who should be prime minister.

On Wednesday, PD leader Nicola Zingaretti laid down his own five conditions that should form the backbone of any accord — “loyal membership” of the European Union; giving parliament a central role; economic development based on environmental sustainability; a change in handling migrants and a change to economic policy to boost investment.

Those seemed low hurdles for 5-Star to clear, but Zingaretti then added that he would also not accept giving a fresh mandate to the outgoing Conte, a technocrat who is close to 5-Star.

On Thursday he raised the stakes further with three more specific conditions: 5-Star must agree to repeal laws on security and immigration passed during its coalition with the League, revise a plan to cut the number of lawmakers to 600 from 945 and immediately commit to a framework agreement with the PD on the 2020 budget.

It remains to be seen if Zingaretti’s tough stance is just a negotiating ploy, or if he is ready to face an election, partly to settle scores in his divided party where many lawmakers still answer to his predecessor, former prime minister Matteo Renzi.

5-Star’s support has slumped over the last year and it does not want a return to the polls but it has warned the PD that it should not push too hard.

“We will not accept the PD’s vetoes, they can’t say we must accept their five points or it’s no deal, that Conte must go or it’s no deal,” said Manlio Di Stefano, a junior foreign minister and one of 5-Star’s most prominent lawmakers.

The outlook was further complicated on Thursday when Salvini said after his own talks with Mattarella that he would still consider a return to government with 5-Star if it adopted a more constructive approach to the League’s policies.

“Luigi Di Maio has worked well and in the interests of this country … if he wants to relaunch the government and relaunch the country we are ready, without any prejudice,” Salvini said.

A reconciliation between the League and 5-Star is considered unlikely after the bitter recriminations between the parties in the last two weeks but it remains one of the options on the table along with a 5-Star/PD tie up and a snap election.