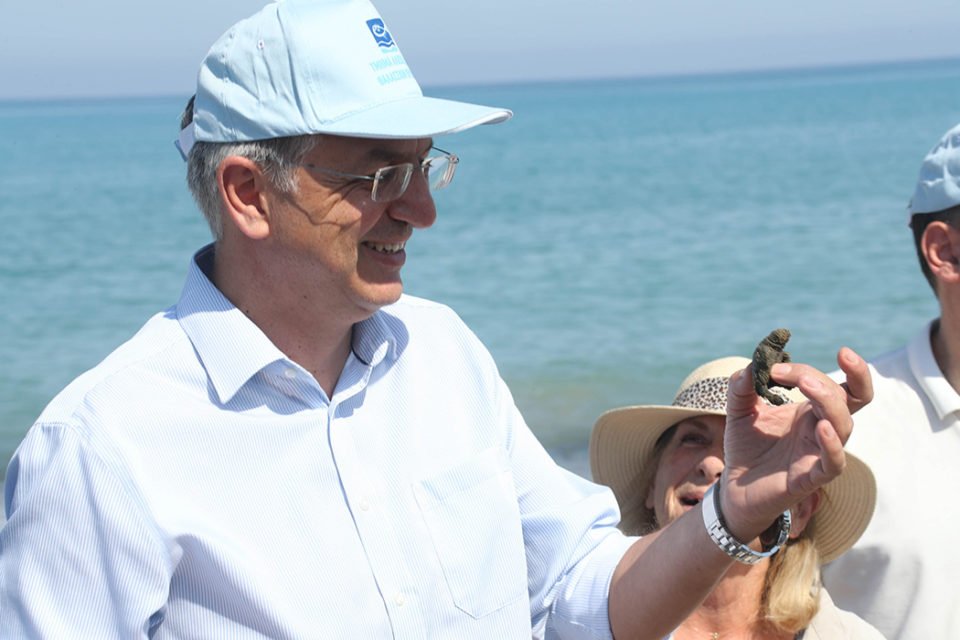 Agriculture Minister Costas Kadis on Friday urged disgruntled residents of Paphos villages with protected beaches to remain patient and rest assured that the sustainable development plans for Akamas will bring “substantial benefits to the communities”.

Asked on a radio news programme to respond to the decision by the Inia village council to stage a demonstration to allow sunbeds and umbrellas on the protected turtle beach in Lara, Kadis said that he regretted having disputes with local communities but, “the specific beach has certain particularities which we must respect”.

“Efforts must be made for the preservation of our natural heritage, and we would like the local population to be by our side,” he said.

Lara beach is an area of global significance, and is protected by both local and Natura 2000 European legislation, Kadis said. It has been a turtle conservation station protected since 1971. Legislation in place forbids sunbeds, umbrellas and tents, as well as cars or caravans. It is also illegal to fish (apart from angling) or light a fire.

On Thursday, Inia community leader Yiangos Tsivikos said the council has been requesting for years to be able to place umbrellas or/and sunbeds at Lara beach, noting that the beach is the only one which is being strictly monitored and where the law is actually applied, driving away tourists who are faced with a €500 fine for any violation of the law. In the past few years, the Fisheries Department, which is in charge of the turtle protection programme, has been particularly robust in enforcing measures.

“The question ‘why have you begun implementing stricter measures in the last two years’ is valid,” Kadis said. “Certain developments drove the Department of Fisheries to take these measures. I myself visited the beach and filmed what was going on, precisely because things had been left unmonitored.”

The Department of Fisheries defended its more stringent measures on Lara beach in an announcement on Thursday. It said intense illegal activity in recent years due to unmonitored conditions have led to its current position of zero tolerance for any violations of the law protecting the Lara-Toxeftra turtle nesting beaches.

Both Kadis and the department underlined that most visitors are happy to comply with the sea turtle protection measures at the beach. Members of the local community however see the measures as one more example of how the protected status of the area deprives them of income.

Asked whether it would be possible to allow the placement of beach furniture for rental on a portion of the beach, Kadis said that experts have ruled against this. Though some protected turtle beaches around the world enjoy sunbeds and umbrellas, Kadis clarified that areas of higher importance require stricter measures.

“In the specific case, the programme that has been in implementation for decades has been extremely successful,” Kadis noted, adding that the programme enjoys special appreciation by the European Commission as a good beach management model.

Despite the communities’ feelings of abandonment and restriction, Kadis said that communities can also benefit from the protection of valuable biodiversity.

Referring to the development plan for the Akamas national forest park, set to be completed by 2020, Kadis highlighted that “it has been shaped in such a way so as to firstly protect biodiversity, but also to bring substantial benefits to the communities.”

The plans foresee that reaching the Akamas area would direct visitors through the other local communities, “which are expected to benefit significantly from the passing of hundreds of thousands of tourists through their areas.”

For decades, communities in the Akamas peninsula and Polis Chrysochous whose areas fall within the Natura 2000 network have been pushing for more development, arguing that due to strict town planning regulations, they have been unable to utilise their properties, citing also breach of their human rights.

Some of Polis Chrysochous’ beaches are major nesting sites for the Mediterranean Loggerhead sea turtle (Caretta caretta), which is an endangered species, along with the Green Turtle (Chelonia mydas) which nests in the Lara/Toxeftra area of the Akamas Peninsula.