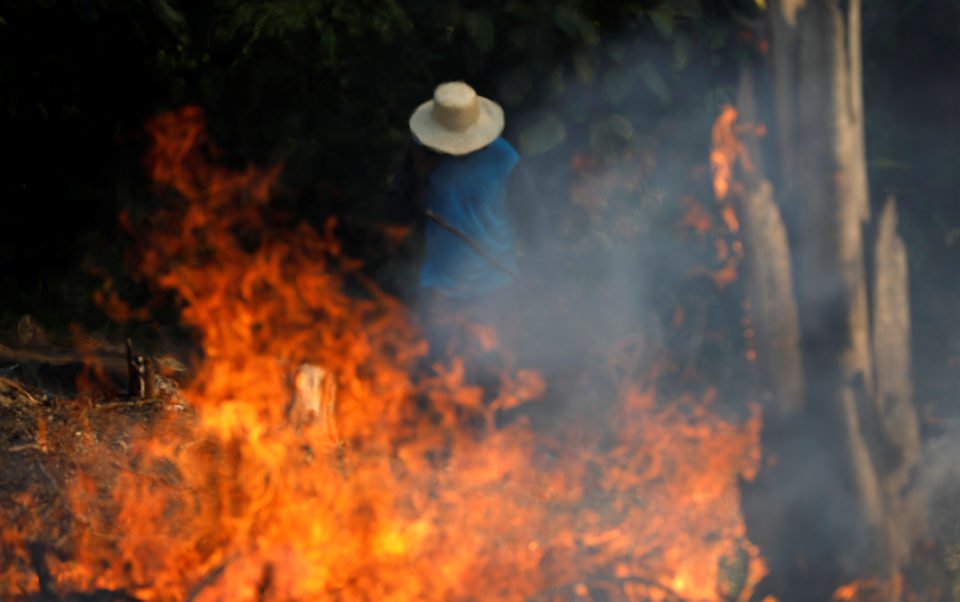 A man works in a burning tract of Amazon jungle as it is being cleared by loggers and farmers in Iranduba, Amazonas state, Brazil

Stung by a global outcry over deforestation and wildfires in the Amazon rainforest, Brazil has launched a diplomatic offensive to persuade the international community of its environmental credentials.

President Jair Bolsonaro’s administration has distributed a 12-page circular to its foreign embassies, outlining data and statistics that diplomats are meant to cite to defend the government’s position on the crisis.

The circular, reviewed by Reuters and reported here for the first time, attempts to address 59 areas where Brazil has come under fire, by citing various policies and data.

It comes as leaders from countries such as Britain, France and Germany have voiced their concerns about the widespread fires. The office of French President Emmanuel Macron even accused Bolsonaro of lying when he played down concerns over climate change at the G20 summit in June.

According to diplomats contacted by Reuters, the pressure on Brazil has ramped up in recent days, with images of the rainforest ablaze shown around the world. Members of the public have sent strong messages to Brazilian embassies, the diplomats said, prompting Brasilia to send the circular.

The document attempts to rebut criticism of Brazil’s environmental record, but ignores some of President Jair Bolsonaro’s more controversial policies.

It neglects to mention that deforestation has been rising steadily again since 2012, due partially to the struggling Brazilian economy and budget cuts that resulted in less environmental enforcement.

This year, preliminary data suggests that deforestation in Brazil’s Amazon has surged 67% through July compared to the same period last year. The number of fires has surged 83% this year.

“It is important to keep in mind that in recent decades, Brazil has been able to twin agricultural production with conservation,” the document says.

“More than 60% of Brazil’s territory (of the Amazon) is covered by natural vegetation, with agricultural activities limited to about 30% of the territory.”

It does not say, however, that Bolsonaro has repeatedly said he believes Brazil has too much protected land and that it should be opened up to farming and mining.

“Brazil has been vigorous in controlling and restricting irregular activities involving land grabbers, loggers and miners so as to reduce deforestation and the invasion of indigenous lands,” the circular says.