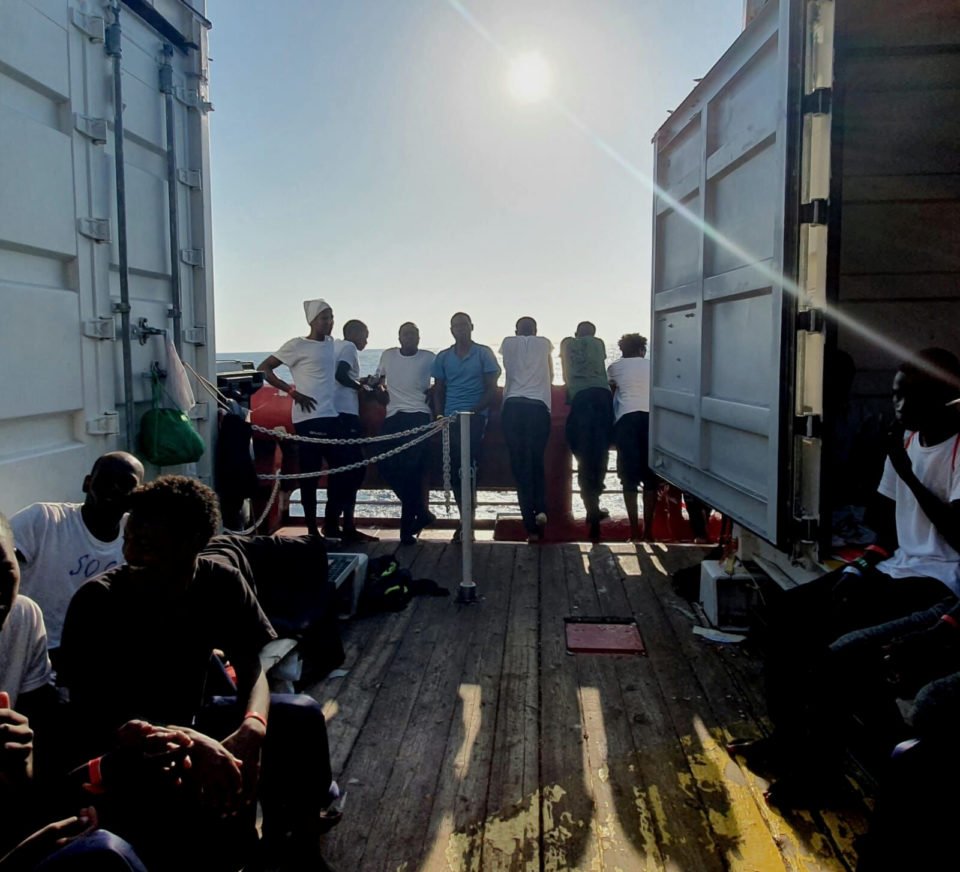 Rescued migrants rest aboard the Ocean Viking, run by French charities Medecins Sans Frontieres and SOS Mediterranee, as it waits in international waters between Malta and the southern Italian island of Linosa for access to a port in this handout picture taken between August 9 and 12, 2019. Ocean Viking/Handout via REUTERS ATTENTION EDITORS - THIS IMAGE HAS BEEN SUPPLIED BY A THIRD PARTY. MANDATORY CREDIT

By Pamela Barbaglia and Stephen Jewkes

The Ocean Viking ship which has been drifting in the Mediterranean for two weeks with rescued migrants on board will dock in Malta after six EU countries reached an agreement, France’s interior minister said on Friday.

Interior Minister Christophe Castaner said France would take in 150 out of the 356 migrants on board the rescue Norwegian-flagged ship. He added Germany, Portugal, Romania, Luxembourg and Ireland were also participating in the agreement.

The Norwegian-flagged ship, Ocean Viking, already stranded at sea for 13 days awaiting port access, has been intially denied entry by Malta and its two requests to Italian authorities have gone unanswered, they said.

The ship is carrying mostly Africans from Sudan, plucked from the sea in four separate missions. They include more than 100 minors, around 90 of them unaccompanied, Médecins Sans Frontières (MSF) said. Three children are under the age of five.

The plight of the Ocean Viking, run by MSF and another French charity, SOS Méditerranée, threatened to create another migration standoff with Italy if it choose to head there, after weeks of controversy involving another charity-run rescue ship.

Around 100 migrants were stranded off Italy for almost three weeks on the Open Arms until a prosecutor intervened and ordered them brought ashore against Interior Minister Matteo Salvini’s wishes. Five of Italy’s EU partners will take them in.

“This is shameful,” said Jay Berger, project coordinator for MSF, speaking by satellite phone from the Ocean Viking, in international waters between Malta and the southern Italian island of Linosa.

“Leaving migrants on rescue boats for weeks until the crisis becomes an emergency is becoming the new norm,” he said. “We’re not trying to force our way into Italian or Maltese waters. We’re waiting for a solution but it is taking too long.”

The ship requested port access to Italian authorities on Aug. 9 and Aug. 12, the charities said.

An Italian Transport Ministry spokesman declined to comment. Italy’s Foreign Ministry did not respond immediately to an email seeking comment.

Rome has banned entry to private rescue ships, which operate off Libya in international waters close to Italy. Salvini calls them “taxis” for people-smugglers and says Italy should not be “Europe’s refugee camp”.

“In response to the appeal by the European Commission, Portugal is ready to take in up to 35 people out of the 356 rescued by the humanitarian ship Ocean Viking,” the Portuguese government said in a statement.

“Portugal, France, Germany, Romania and Luxembourg are the countries that have so far offered to accept some of the people from this boat in a gesture of humanitarian solidarity.”

Aboard the Ocean Viking, supplies are running down and the crew has begun to ration showers to conserve water, said Frédéric Penard, SOS Mediterranee’s director of operations.

“A rescue ship is like an ambulance. People should be transported but not living on it,” MSF’s Berger said, adding that there was no certainty those on board could endure the wait Open Arms experienced, which would mean another week at sea.

The European Commission has invited EU member states to show more “solidarity” and agree to take in migrants aboard the Ocean Viking, a spokeswoman said on Wednesday.

No port except for Tripoli has welcomed the ship, the charities say. They regard the Libyan port as unsafe and fear the migrants would be thrown into detention centres and suffer human rights abuses if returned to the country.

Luca Pigozzi, a doctor onboard, said that while most migrants were in a stable physical condition, he feared the impact of psychological damage caused by violence suffered when fleeing their home country.

“The situation onboard is becoming more tense,” he said.

Libya is a hub for migrants and refugees, many of whom try to reach Europe in unseaworthy boats, fleeing violence and dire poverty in Africa for a better life in Europe. So far this year, more than 600 people have died trying to make the crossing.

Malta turned down the Ocean Viking requests saying it could not take the lead on any disembarkment. A Malta government spokesman said there was “no new update” on the Ocean Viking and declined to comment further.

Norway, where the Ocean Viking is registered, has rejected a French request to take some of the migrants, Justice Minister Joeran Kallmyr told broadcaster NRK late on Tuesday.

Entrenched views will never be put aside by either side

Should we put telescopes on the moon?