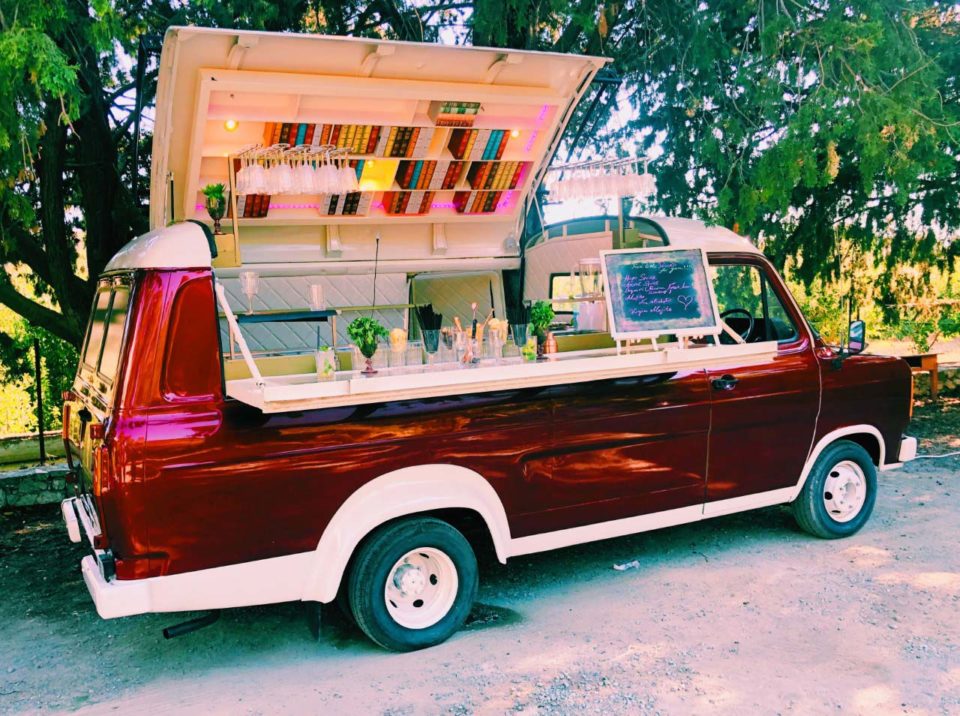 The Ford Transit. A van so iconic it’s been, from its first release in 1965, a firm favourite the world over. Used on African safari, down mines, as a Hong Kong taxi, and once to transport two baby elephants to Regent’s Park Zoo, it’s featured in movies, been described by Scotland Yard as “the perfect getaway vehicle… used in 95 per cent of bank raids”, and broken records (In 1965, 48 students from Barking College squeezed into the back of a Transit).

Originally, the van cost a mere £542. And though the price has risen over the years, a Transit is still sold somewhere around the world every three minutes. But then why buy one new when an older version will do perfectly well? Clean it up, tune the engine, give it a paint job and you’ve got a perfectly respectable mode of transport. Or, should you be a young entrepreneur with a vision, your very own mobile bar…

It’s called Granny’s Ford, and it’s both bus and business: a Ford Transit 1977 that’s gone from venerable vehicle to hot hipster hangout. The creation of Evros Pittalis and Christos Lazaris, it’s now a dream: tricked out in sparkling scarlet and gleaming ivory; the inside all quilted panels, chrome detailing, glass fixtures, and neon lighting. Glasses hang overhead, and fridges – containing all manner of beverages – line the side. 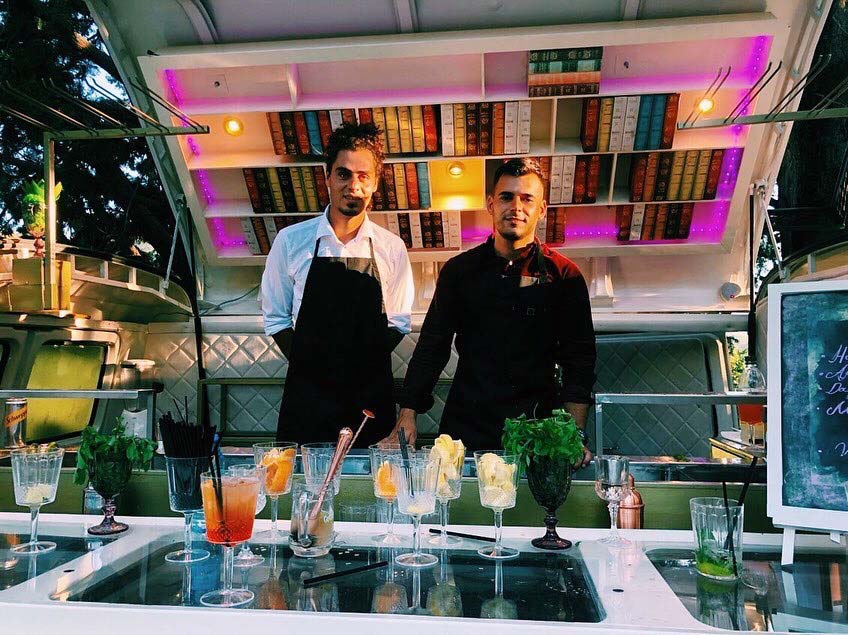 Billed as a ‘revolutionary bartending service’, Granny’s Ford is the party piece you never knew you needed: a mobile drinks dispenser complete with a shot of nostalgia. Available for weddings, christenings and events, it’s the simple drive-up option for when a standard bar just won’t do. Function in a field, bash on the beach, gathering in the garden? This might just be your answer!

Hot off the press but already in great demand, Granny’s Ford has serviced various private events since it hit the road in June. But the journey from field to functioning bar has been far from a breeze. Originally a passenger bus connecting various mountain villages with Limassol, the van belonged to one Andreas, proud owner and driver. But in 1984, it took its last fares; Andreas retired, and the Ford was left to live out its days under a tree in the village of Agridia. And there it stood for 32 years. Until, that is, it was discovered by Christos and Evros…

“We’d had the idea of a mobile bar for quite some time,” Christos explains. “We’d looked at a van in Astromeritis, exactly the same make, model and year, but it was too far gone. Fortunately, one of our contacts had seen another in Agridia that he thought was in a much better state.”

With no idea of what to expect, the duo set off for the village, and knocked on Andreas’ door. “We sat down over lemonade, and explained what we hoped to do,” Christos reveals. “Understandably, Andreas was reluctant – he had a strong emotional connection to the van. But his wife, Angeliki, was incredibly supportive. She saw our vision immediately, and I think her enthusiasm convinced her husband.”

Thanks to Angeliki’s powers of persuasion, the sale was confirmed two days later, and the enterprising pair became the new owners. But there was still a great deal of work to be done. “Although Andreas had been starting the van each month, there was considerable oxidisation and degradation, and initially no one would risk helping us,” smiles Christos. “But eventually, we found a car workshop that specialised in such projects in Limassol.”

Hours explaining their vision to the owner, months spent on restoring the engine, and years to get the Ford to its current state made for “a labour of love as much as a business project,” says Christos. “It took us three whole years to complete, with no surety that our idea – let alone the vehicle – would even work at the end! But the journey paid off. It almost felt like the van itself wanted to come back to life. And today, Granny’s Ford” – a name that pays tribute to Angeliki’s unwavering support – “is once more on the road and open for business.”

“It is,” says Christos, “far more than just a bus! It’s fun, it’s different, and the quality of the restoration and build is beautiful – we find our guests and clients can’t resist taking a snap or two alongside it; it makes for very memorable Instagram moments, and we’re even hiring it out for the odd photoshoot!”

Complete with its own team of bartenders, and featuring an extensive menu in keeping with the van’s era, Granny’s Ford offers classic cocktails with a modern twist, unusual spritzers, and a range of non-alcoholic mixes. The must-try, however, is Granny’s Diary, a signature cocktail in honour of the van’s former owner. An eclectic combination of gin, Chambord liqueur, cranberry juice, and strawberry purée, it comes garnished with a leaf of basil, a single strawberry, and a dash of cinnamon.

“Everything that goes into a glass at Granny’s Ford is with deliciousness in mind,” says Christos, noting that the signature cocktails will change each season. “At the moment, we’re offering cool, refreshing drinks. But come winter, we’ll change things up. We’re lucky,” he adds, “that the Cyprus weather is so good all year round; in fact, this is the perfect place for a mobile bar. Not only can you have an outside bar even in the cooler months, the distances between cities and villages are short – so we can go anywhere on the island.”

And that’s the essence of a Transit, really: you can take it anywhere, stuff it with elephants or students, and whip up a party wherever you go. Or, if you’re a man with a van and a plan, you could rejig the whole vehicle, turning an iconic mode of transport into the island’s very first vintage mobile saloon!