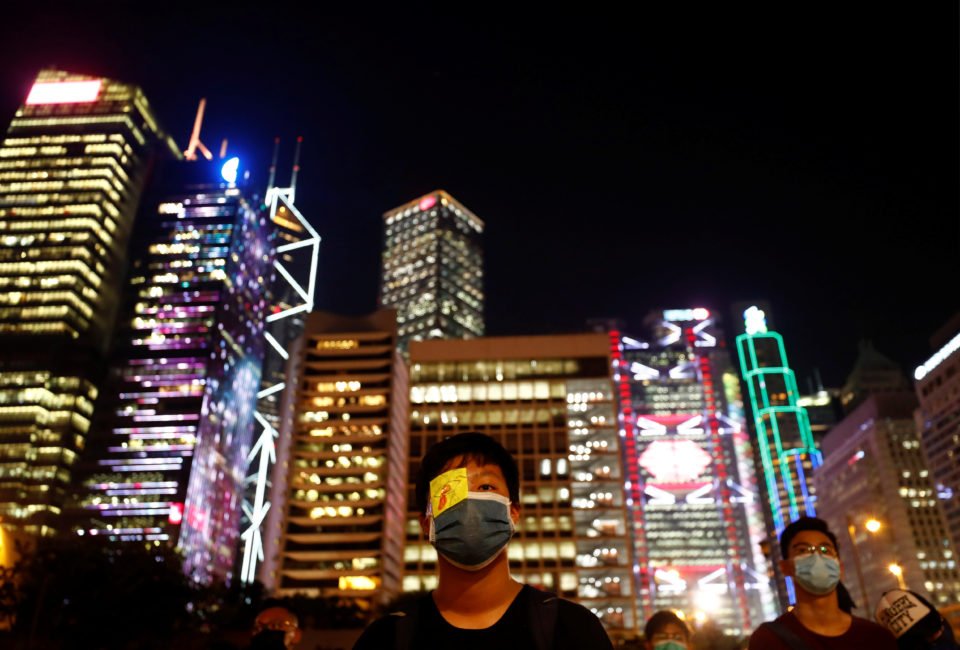 A protester wears an eyepatch with a slogan as students attend a rally to call for political reforms outside City Hall in Hong Kong, China, August 22, 2019. REUTERS/Kai Pfaffenbach

By Elizabeth Culliford and Paresh Dave

“This discovery was consistent with recent observations and actions related to China announced by Facebook and Twitter,” said Shane Huntley, one of Google’s security leaders, in a blog post. http://bit.ly/2zc4z2m But he stopped short of identifying the origin of the channels.

Twitter Inc and Facebook Inc on Monday said that channels they had removed had engaged in a state-backed effort by China to undermine the protests in Hong Kong through posts calling participants dangerous and vile extremists.

The protests, which have presented one of the biggest challenges for Chinese President Xi Jinping since he came to power in 2012, began in June as opposition to a now-suspended bill that would allow suspects to be extradited to mainland China for trial in Communist Party-controlled courts. They have since swelled into wider calls for democracy.

“We are deeply concerned by Chinese attempts to manipulate public opinion by spreading disinformation about the situation in Hong Kong,” a United States State Department spokeswoman told Reuters.

The Chinese embassy in Washington did not respond to requests for comment. The Chinese mission to the United Nations sent Reuters a link to a story from the ruling Communist Party media outlet People’s Daily that said Twitter and Facebook “abused media freedom” in cracking down on accounts that had revealed violence in the protests.

Twitter, Facebook and YouTube are all blocked in mainland China by the government but are available in Hong Kong. Each of the services bans deceptive practices and inauthentic accounts.

The three companies have also come under fire from users for generating revenue and supporting state media and officials in China.

Several social media users in Hong Kong have posted screenshots over the last two weeks that they said showed anti-protest advertising from outlets such as China Central Television, or CCTV, appearing on Twitter and YouTube. The ads criticized the Hong Kong protesters.

In response, Twitter said Monday it would no longer accept advertising from state-controlled news media, a change that had been in the works for months.

Facebook spokesman Andy Stone said “we continue to look at our policies as they relate to state-owned media.”

YouTube said it did not plan to change its ads policies. But YouTube told Reuters that it would soon be expanding its labeling of state-backed media outlets in the region.

YouTube places a disclaimer on its services from government-funded networks around the world, including Chinese broadcasters Xinhua, CCTV and CGTN, but it does not yet include the label for Chinese newspapers People’s Daily, China Daily and Global Times, Reuters found on Wednesday.

Social media companies long have courted closer relationships with news outlets and politicians around the world, hoping that getting them to post on their services would in turn attract more users. But relationships with governments such as China, which regularly faces criticism of its human rights record, have drawn scrutiny from users and lawmakers in the United States.

Facebook’s Stone confirmed the company has conducted trainings in China for government and state media personnel.

“We provide a standard set of guidance and best practice training to groups around the world including governments, political parties, media outlets, and non-profits so they can manage their Facebook Pages,” he said.

Twitter and YouTube did not immediately respond to questions about their support and training for state media outlets, but Bloomberg on Wednesday reported that Twitter has trained Chinese officials on how to use its tools.

As Amazon burns, Brazil’s Bolsonaro tells rest of world not to interfere (V)

A day dedicated to loving the environment