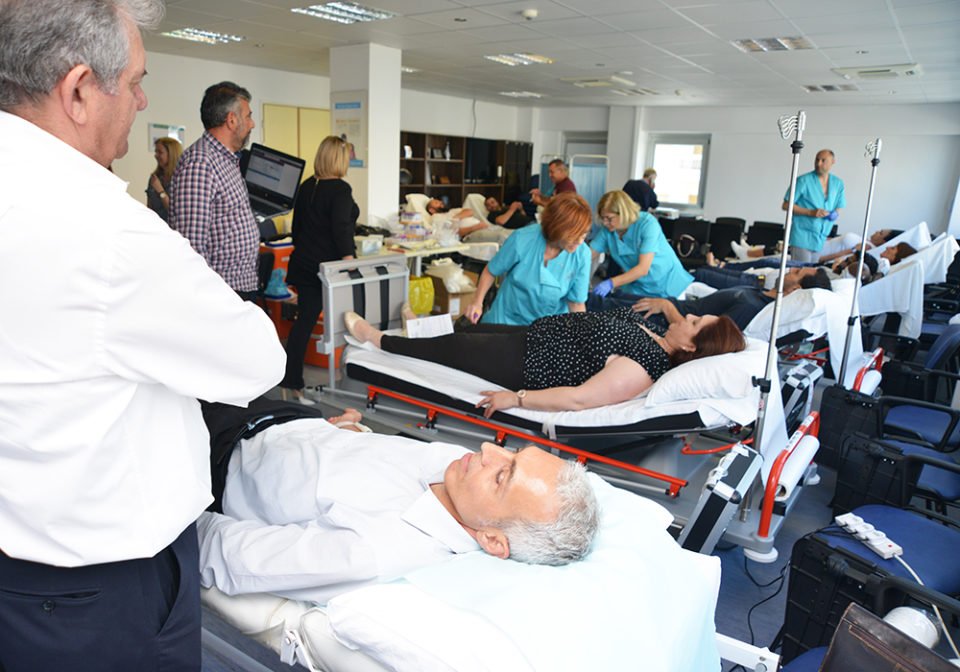 Every year 62,000 units of blood are donated

When it comes to donating blood, we have every reason to feel proud of ourselves.

In 2017, Cyprus was ranked first among EU countries for volunteer blood donations in proportion to its population. It is also one of only 62 countries worldwide which covers 100 per cent of its blood needs through voluntary donations.

It is as well that we are so generous with our blood: the needs are great.

“There are still problems because 40 per cent of the blood goes to thalassaemia patients,” acting director of the blood bank Socratis Menelaou told the Sunday Mail.

Around 700 people in Cyprus suffer from beta minus thalassaemia, the inherited blood disorder to which Cypriots are particularly prone and which requires regular blood transfusions. Sixteen per cent of Cypriots are carriers.

Most of the year blood supplies fulfil the demand but August when so many people are away is a blood-dry month. Hence the call for blood donations in recent weeks.

So how does it all work normally?

Every day the blood bank, a centralized health ministry service, organizes at least five blood donations to cover the needs of patients, apart from hosting donations which are made on a daily basis at the five permanent blood stations all over Cyprus.

In this way, the blood centre manages to collect a huge amount of blood every year, 62,000 units – each unit meaning the blood donated in one session by one individual.

To get this amount, 80,000 potential volunteering donors must be found, as some of them are deemed not suitable.

Those who come forward willing to donate their blood have to fill in a form regarding their medical record. Then their haemoglobin level is estimated with a simple test and the volunteer has a short conversation with a doctor, who then decides if the donor is healthy enough to give blood.

The five blood banks are in all major cities: Nicosia, Limassol, Larnaca, Paphos and Famagusta.

In addition, the blood service visits practically every organization and place they can think of. Schools, football clubs, offices, government offices, villages and army camps top the list.

The success rate is high for all targeted age groups, but students are especially generous, Menelaou told the Sunday Mail.

“More than 80 per cent of students aged 17 and older donate blood,” he explained.

Which brings us to the permitted age group. For reasons protecting both the donor and the recipient the donors must be aged from 17 to 66, must have a certain weight and an acceptable blood pressure.

All the collected blood is taken to Nicosia hospital from the five centres. There, three things are done by the chemists.

First, the units are checked for HIV, and various other diseases, most recently West Nile virus.

Then the blood is grouped by blood group and antibodies.

Third, it is separated into plasma, red blood cells and platelets. Which means that each donation can help up to three patients, for different purposes.

The blood is then sent out to all the big hospitals, in vehicles with special boxes, as all three components require different temperatures.

Plasma must be transported at minus 20C, red blood cells at 2 to 4C and platelets at room temperature.

All this is a lot of work as each time a donation takes place in an external area, instruments must be set up and personnel have to travel. All in all, eight doctors, 40 blood attendants and 20 chemists help achieve the high levels of donations.

Though the levels of participation are so high, the summer months are a worry and it is not just because donors are away.

Blood cannot be stored for long periods of time. Though plasma can be stored for a year, red blood cells can only be in storage for 42 days and platelets for just five days.

Pope calls for global commitment to put out Amazon fires

Kazakhstan: the highway of the new age