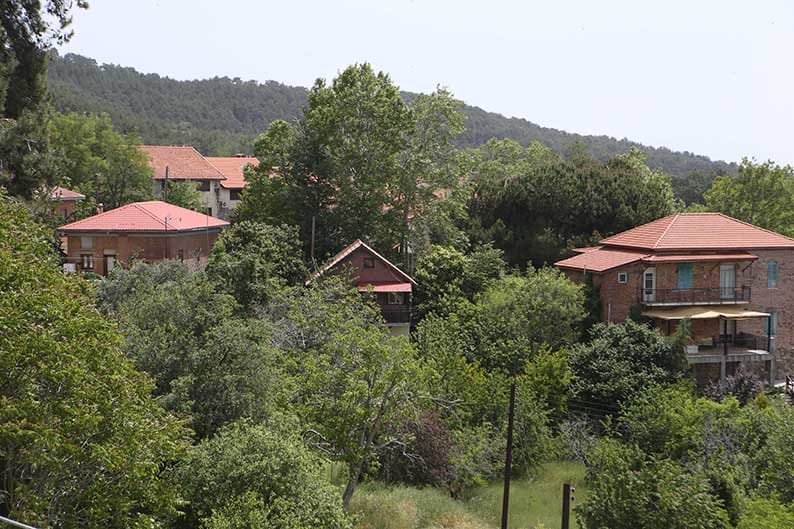 Platres is famous for its brick houses (Christos Theodorides)

He has appointed  Yiannakis  Papadouris  – who was successful in developing agrotourism in Kalopanayiotis – to submit proposals but Papadouris is said to have stated that he will not prepare and submit a proposal for the development of Platres.

Platres saw very successful days in luxury hotel development and tourist arrivals from overseas until the Second World War.  The tourists came mainly from amongst the Greek settlers in Egypt and Sudan until Colonel Nasser ejected the Greek community from Egypt and the political situation in Sudan made the Greek community leave the country.

In its glory days, Platres attracted kings, like Farouk of Egypt, and international writers and artists.

Well-to-do Cypriots built houses in Platres, used mainly during the summer months, as did the British civil servants before them.

Platres is definitely a unique beautiful gift of God to us.  With its extensive forests, its impressive waterfalls, its cool refreshing climate, it stands ahead as a tourist resort.  The revival of Platres would also reflect on the other resorts in the area.  Platres must be revived because it would benefit Cyprus as a whole.

The following three-point plan could bring about the desired change.

Second, expand what is on offer for tourists.  Platres has extensive football and tennis courts.  Tournaments with nearby countries would attract much attention.  Organise visits to Troodos and other nearby villages. Small buses can be used for visits to the unique Unesco mediaeval churches, the nature museum and the botanic gardens. Other organised trips could include walks on the nature trails, visits to the over one-thousand-year old trees and tasting local preparations like Soutzouko, palouze and other delicacies.

Platres can also operate during the winter when there is snow on Mount Troodos.  It is only a 10-minute drive. Thus, the season can be extended.

The third and most important point is to bring the tourists to Platres.

In the past, the clients of the Platres hotels came from hot countries, like Egypt and Sudan. We could still aim to attract the inhabitants from these hot countries whose inhabitants go to cooler destinations during the summer and have high incomes per capita.

Bahrain. Israel, Kuwait, Oman, Qatar, Saudi Arabia and the United Arab Emirates are all high earning countries with a population of over 52 million prospective tourists.

The Deputy Minister of Tourism Savvas Perdios should organise the necessary publicity in such countries while hoteliers should visit the staff of important companies and make presentations.

What about the ageing Platres hotels? The Pendeli closed down several years ago.  It must be financed to be repaired.  The Petit Palais was recently renovated but due to lack of custom it was sold, and it is closed. The extensive Forest Park Hotel with a value of €25,000,000 and an area of 27 donums has been let for a mere €20,000 a month.

With the presently over capitalised Cyprus banks and the deposit interest rate of at 0.5 per cent, we have a rare opportunity to finance the resurrection of several Platres hotels.  It is a good chance, but we need to bring in the tourists.

I appeal to President Anastasiades to implement our suggestions. Platres can and must be revived for the benefit of all the mountain resorts and the benefit of Cyprus.

A special island has now been ruined