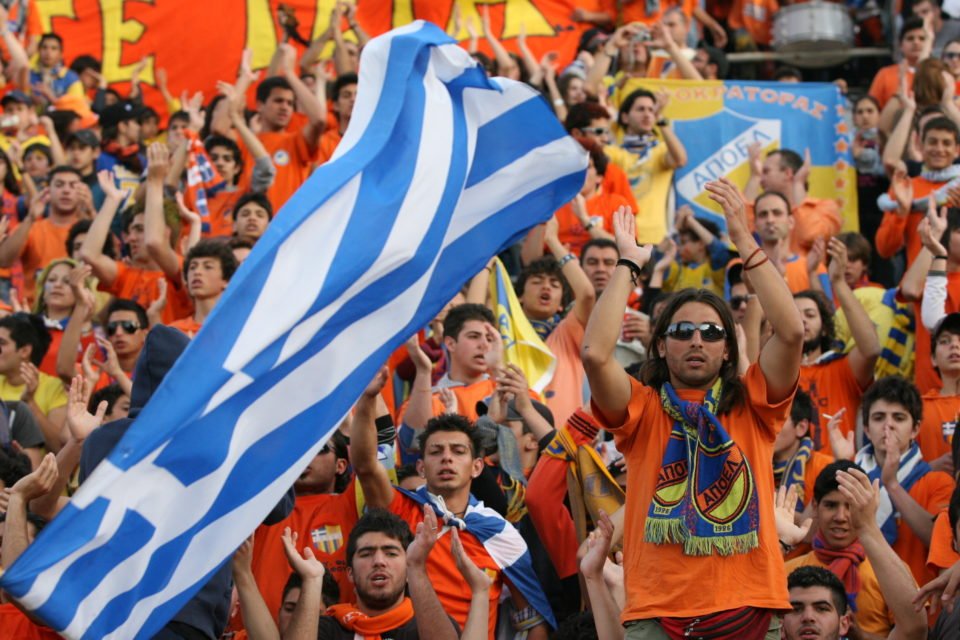 TURKEY, as we all know, does not recognise the Cyprus Republic and has labelled it ‘defunct’. The message the Erdogan government has always tried to convey to the international community is that the Cyprus Republic is merely the ‘Greek Cypriot administration’.

To promote this position Turkey has found an unexpected ally – the nationalist football clubs of Cyprus. The fans of these clubs use only Greek flags or Greek Cypriot flags (map of Cyprus with the Parthenon featuring prominently) and declare urbi et orbi that the Cyprus Republic is, in reality, defunct and therefore there is no Cyprus flag. What else can the use of the flag of another state and not that of Cyprus when you are representing Cyprus abroad mean other than the non-recognition of the Republic? If we throw our flag in the rubbish bin, why should foreigners respect our flag and our state entity?

The bosses of the clubs could argue that, according to the 1960 constitution, a club is allowed to raise the Greek, Turkish or any other flag. This, though, does not mean that Cyprus can be officially represented in international sports or any other field by foreign flags. The league champions of Cyprus are represented in the UEFA competitions and not the league champions of the Greek Cypriot community, therefore the argument would constitute a distortion of constitutional law. It would also be said that the Greek flag represents the Greek nation and, therefore, flying it is not a foul.

The argument is cited by those who confuse ‘state’ with ‘nation’. The flag represents the state, not the nation. In other words, there is no flag for the Greek or any other nation. For example, the Greek flag that flies together with all the other flags at the UN building in New York represents only the people of Greece, the citizens of the Greek state and not the Greeks all over the world.

Incidentally, it is amusing to hear the a la carte reference to the 1960 constitution from the ‘high priests of legality’ while they completely ignore flagrant violations of the constitution such as the Cyprus Republic’s adoption of the Greek national anthem.

It is blatantly obvious that the bosses of certain football clubs exploit their underaged and immature supporters to promote their agenda. Unthinkingly, these supporters, wrapped in Greek or in Greek Cypriot flags, become the advocates of Erdogan. Unthinkingly, they are aligned with the occupier. Unthinkingly, they undermine our state entity. Unthinkingly, they contribute to the de jure partition of Cyprus. If Cyprus, that has been climbing its Golgotha for some time now, had a voice, it would have whispered to the Almighty, ‘Father forgive them because they do not know what they do.’

And what can one say about the favoured slogan of the underaged, that ‘Cyprus is Greek’? It was the slogan that reverberated from one corner of Cyprus to the next before 1974. Today, de facto at least, Morphou is Turkish, Kyrenia is Turkish, Akanthou is Turkish, Yialousa is Turkish, the whole of the north of Cyprus is Turkish. We made these places Turkish because we were trying to implement our slogan by completely ignoring the existence of the Turkish Cypriots and Turkey. Only the small-minded nationalists cannot comprehend that this slogan dealt a huge blow to the Hellenism of Cyprus – half our country is occupied by Turkey and the other half is being relentlessly threatened. As I have noted in a previous article, there is no more anti-Greek slogan than ‘Cyprus is Greek,’ something confirmed by history. It was an amalgam of opportunism, vanity and short-sightedness that caused the Armageddon of 1974.

Those, however, that guide the young supporters know very well what they are doing. Consciously, the conservative right, the far-right and indirectly the church which controls the football clubs undermine our statehood. It is the faction that slavishly cooperated with the Greek Junta, which it honoured and praised. This faction finds the Cyprus flag repulsive and remains indifferent to the fact that this action leads to the de-recognition of the Cyprus Republic.

Why do they do this? What is their aim? According to the pre-Socratic philosopher Heraclitus ‘Everything flows, nothing is left behind.’ Forty years ago, the two-state solution was inconceivable, out of the question. Thirty years ago, its discussion was a taboo subject, 20 years ago it was worth discussing, 10 years ago it was, possibly, acceptable. Today it is the desired solution of the conservative right, the far-right and the church. For this fact, the desire for enosis still burns. It had never accepted the solution of independence and their main concern after independence was how to undermine the Republic. It is worth noting that before 1974 they proposed that the Greek and not the Cypriot flag be flown at the presidential palace and House of Representatives.

Realising now that enosis is not attainable, they would much prefer that the half of Cyprus in the south was ‘purely Greek’ than have the whole of Cyprus and share power with the Turkish Cypriots. Some of them might say they do not accept the two-state solution, but their words are rendered meaningless by their actions.