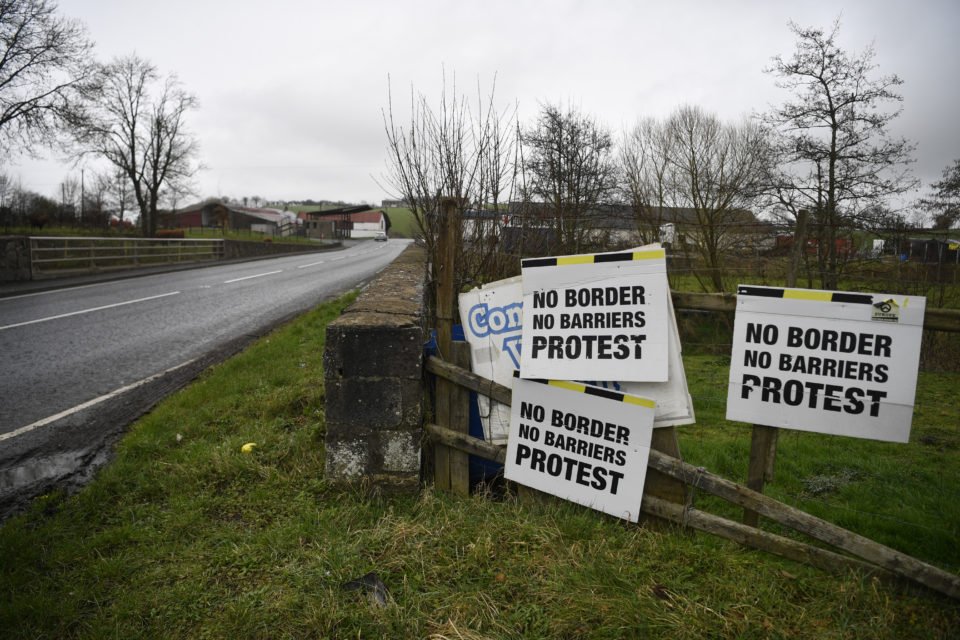 File photo: Placards hang on a fence near a road in a protest against 'hard border' after Brexit close to the border between the Republic of Ireland and Northern Ireland outside the town of Middletown in Northern Ireland. EPA-EFE/NEIL HALL

The last time an autonomous territory withdrew from the European Community was in 1984 when Greenland left after a referendum in which 52 per cent of its tiny population voted to leave while remaining part of Denmark.

Now the United States wants to buy Greenland from Denmark and President Donald Trump cancelled a state visit there after being told Greenland was not for sale. There is moral there somewhere for Britain. She has possessions around the globe that Trump may wish to buy. After Brexit who knows?

In the meantime, Britain is struggling over the Northern Ireland backstop in her bid to leave the EU with a deal, which is difficult unless the EU agrees to do something about the backstop.

The EU’s position on the backstop is that Britain may withdraw from the EU on October 31, 2019, but not the customs union and the single market unless and until she reaches a trade agreement with the EU during the transition phase that preserves the integrity of the single market in Ireland.

The Good Friday Agreement under which peace was achieved in Northern Ireland was based on there being no internal frontier – a smooth border  –  between north and south, which was made possible because both Britain and Ireland were members of the EU.

The problem now is how to preserve the smooth border and maintain the integrity of the single market in the Republic of Ireland after Britain leaves the EU.

The customs union and the single market that the backstop seeks to preserve in Northern Ireland are basic to the existence of the EU. So it must be for the union to justify why Britain should be required to remain within the constraints of the EU indefinitely given she decided to leave the EU in order to escape those constraints.

The difficulty is that according to the EU the smooth border between Ireland and Northern Ireland that exists at present requires Britain to remain in the customs union and the single market to stay smooth whereas Britain thinks otherwise. Conceptually border controls are a moveable feast. The actual border in Northern Ireland can stay smooth because border controls can operate away from the actual border.

More importantly, it is insulting to Britain’s amour propre to be required to remain a quasi member of the EU as insurance to guarantee her treaty commitments under the Good Friday Agreement. Since when has Britain had to provide insurance that she will keep treaty obligations?

It is not even certain that article 50 of the Lisbon Treaty that enables countries to leave the EU permits the EU to insist on the retention of its customs union and single market indefinitely by an exiting state given the EU treaties cease to apply to a country after she leaves.

The future relationship of Britain and the EU envisaged by article 50 is one free of the constraints of all key elements of membership such as the customs union, the single market, free movement, financial contributions, the jurisdiction of the Court of Justice and the supremacy of EU law.

Also, it is not clear that the previous withdrawal agreement that included an indefinite backstop was authorised by article 50, and it is most certainly not set in stone as it was not approved by the UK parliament. So the EU has a legal obligation to negotiate an alternative rather than hide behind an agreement that is not legally binding either on the UK or the EU.

It is, however, an oversimplification to argue as Prime Minister Boris Johnson did in his letter to the EU last week that the backstop is undemocratic. The United Kingdom is the union of England, Scotland, Wales and Northern Ireland, and it is a pity David Cameron did not heed the advice of his civil servants when the referendum bill was going through parliament in 2015 to provide for separate majorities in each for the UK to leave.

Majoritarian tools such as simple majority referendums are not necessarily democratic if the result is out of sync with the wishes of all the constituent parts of countries such as the UK; for what good could come of Brexit if the UK breaks up to achieve it?

A pragmatic and democratic way forward that has something for everyone and preserves the unity of the kingdom and respect for the referendum result, is to keep the backstop but limit it to Scotland and Northern Ireland. The EU would probably agree since their original position, rejected by Britain, was to confine the backstop to Northern Ireland.

It is something to ponder because one reason Ulster Unionists are patriotic about the United Kingdom is their ancestral connection with Scotland – not for nothing are they known as Ulster Scots. So they would not forgive themselves if Scotland were to break away from the UK owing to their intransigence.

Bearing in mind that the backstop is an insurance mechanism included out of an abundance of caution to cater for the remote possibility that no trade agreement between the UK and the EU is reached, the extension of the backstop to Scotland to placate the Ulster Unionists and reassure the Scots makes sense if it can be done.

Salah at the double as Liverpool dispatch Arsenal

Reviving Platres, the former jewel of the mountains