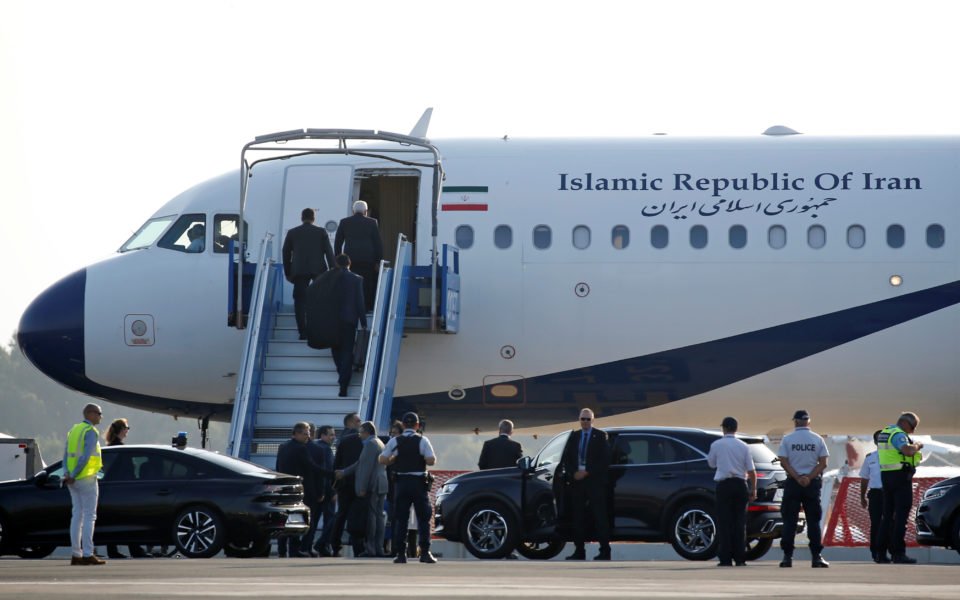 An Iranian government plane is seen on the tarmac at Biarritz airport in Anglet during the G7 summit in Biarritz, France, August 25, 2019. Iran’s foreign minister Mohammad Javad Zarif arrived on Sunday in Biarritz, southwestern France, where leaders of the G7 group of nations are meeting, an Iranian official said. REUTERS/Regis Duvignau

By Marine Pennetier and Michel Rose

BIARRITZ, France, Aug 25 (Reuters) – Iran’s foreign minister made a flying visit for talks with host France at the G7summit on Sunday, as Paris ramped up efforts to ease tensions between Tehran and Washington, a dramatic diplomatic move that the White House said had surprised them.

European leaders have struggled to tamp down the brewing confrontation between Iran and the United States since Trump pulled Washington out of Iran’s internationally-brokered 2015 nuclear deal and reimposed sanctions on the Iranian economy.

Foreign Minister Mohammad Javad Zarif, who is under U.S. sanctions, flew to the southwest French town of Biarritz where the Group of Seven leaders are meeting. He held more than three hours of talks, including with Macron, before heading back to Tehran.

“Road ahead is difficult. But worth trying,” Zarif tweeted, adding that in addition to meeting French leaders he had given a joint briefing to officials from Germany and Britain.

French officials sought to bill the meeting as important to “refine Iranian propositions” to help defuse the crisis after G7 leaders had discussed Iran over dinner on Saturday.

“The discussions that were held between the president and Zarif were positive and will continue,” a French official said after the meeting, declining to take detailed questions.

The 2015 nuclear deal between Iran and major powers aimed to curb Iran’s nuclear activities in exchange for the lifting of many international sanctions on Tehran.

Since pulling Washington out of the deal last year, Trump has pushed a maximum pressure policy to try to force Iran into a new negotiation that would include its ballistic missile programme and regional activities.

While Trump’s European allies also want new talks with Iran, they believe the nuclear deal must be upheld. Macron, who has taken the lead in Europe in trying to salvage the agreement and avert a deeper crisis in the Middle East, had already met Zarif in Paris on Friday.

They discussed proposals to de-escalate tensions between Washington and Tehran, including easing some U.S. sanctions or providing Iran with an economic compensation mechanism to make up for oil revenues lost under U.S. sanctions.

NO PROGRESS ON OIL SANCTIONS

But despite Macron spending two hours with Trump over lunch on Saturday and all seven leaders discussing Iran at length in the evening, it did not appear that the U.S. leader had budged on easing oil sanctions as Macron had sought from Trump.

A European diplomat familiar with the discussions said the leaders had failed at the dinner to persuade Trump.

Earlier on Sunday Trump appeared to brush aside French efforts to mediate with Iran, saying that while he was happy for Macron to reach out to Tehran to defuse tensions, the United States would carry on with its own initiatives.

Trump and Macron are scheduled to hold a joint news conference at 3:30 p.m. (1330 GMT) on Monday at the conclusion of the summit, the White House said.

Macron’s invitation to Zarif had caught Trump by surprise, a White House official said, and no U.S. officials met with Zarif during the visit.

In response to the tougher U.S. sanctions and what it says is the failure of European powers party to the deal – France, Britain and Germany – to compensate it for lost revenues, Tehran has responded with a series of moves, including retreating from some of its commitments to limit its nuclear activity.

Highlighting just how difficult it will be ease tensions, two Iranian officials and one diplomat told Reuters on Sunday that Iran wants to export a minimum of 700,000 barrels per day of its oil and ideally up to 1.5 million bpd if the West wants to negotiate with Tehran to save the nuclear deal.

One of the Iranian officials also said Iran’s ballistic missile programme was not open for negotiation.

“We’ll do our own outreach, but, you know, I can’t stop people from talking. If they want to talk, they can talk,” Trump said earlier when asked about Macron’s mediation efforts.

The United States has made no indication it will ease any curbs and it is unclear what kind of compensation mechanism Macron wants to offer Iran, given at this stage a proposed trade channel for humanitarian and food exchanges with Iran is still not operational.

Macron has also said that in return for any concessions he would expect Iran to comply fully with the nuclear deal and for Iran to engage in new negotiations.

Omonia and Pafos FC get off to winning start