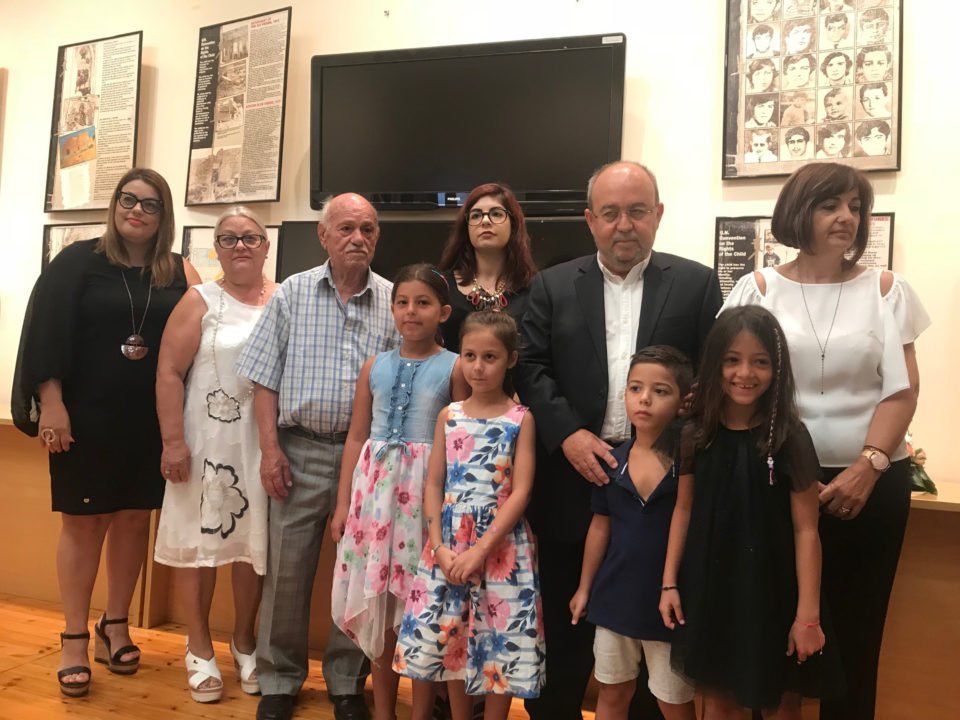 The new mayor with his family

Newly elected Famagusta mayor Simos Ioannou was formally sworn in on Monday and used his acceptance speech to call out to both Greek Cypriots and Turkish Cypriots to work together against any illegal settlement of Famagusta and have the city returned to its rightful owners.

“Famagusta is facing a huge danger which will create an irreversible fait accompli,” he said.

The path on which Turkish Cypriot ‘foreign minister’ Kudret Ozersay and ‘prime minister’ Ersin Tatar are moving towards by opening up Varosha – the fenced-in part of Famagusta – violates international law and UN resolutions, he told a packed room of dignitaries and supporters during his swearing in ceremony in Dherynia.

He said a large number of Turkish Cypriots were against these moves.

“I call on to Messrs Ozersay and Tatar not to continue with these actions but choose the path of peace and UN resolutions on Famagusta. That is where the benefit of all Cypriots lies, the road that leads to a future of peace and well-being.”

In his speech, Ioannou also sought to send “a message of cooperation and a common struggle and brotherhood towards our Turkish Cypriot compatriots. I firmly believe that Greek Cypriots and Turkish Cypriots must fight together against the potential settlement of Famagusta.”

If only the legal residents of Famagusta are returned to their homes under the administration of the UN, then the city will be “a living example of peaceful coexistence and cooperation between Greek Cypriots and Turkish Cypriots, a miniature of a future united Cyprus. Living proof that we can do it.”

Ioannou was elected mayor for occupied Famagusta on Sunday after his predecessor Alexis Galanos passed away last month, securing 48.94 per cent support, or 4,697 votes. Voter turnout was 30.73 per cent, with 9,707 people voting out of a total of 31,584 registered voters. Abstention rate was 69.27 per cent and 98.88 per cent of the ballots were valid.

The mayor said there were some objective reasons which could account for the abstention rate including people being away on holiday, the heat and the fact that there was a fall in the number of voting centres.

“As we know, Cypriots want to vote right outside their house.”

Nonetheless, he said these aren’t excuses and the municipality would look for ways to bring residents closer to their local authority, particularly the young. His next steps will be to ask President Nicos Anastasiades to convene the national council and decide on a common way forward in agreement with all the political parties.

Additionally, meetings will be arranged on an EU level in cooperation with Cyprus’ six members of European parliament and the ambassadors of the countries on the UN security council.

“After 45 years, almost half of Famagusta’s population has passed away. Some have married with people hailing from Limassol, Nicosia, Paphos and the social fabric of Famagusta has thinned out. That is why I believe a lot of focus needs to be placed on the young.”

Social media will be used, visits will be increased to meet with locals from Famagusta in a bid to come closer to the people.

Ioannou was backed by Akel, Diko, the Democratic Front and the Citizens’ Alliance, which congratulated him for his success, as did ruling Disy.

Far right Elam called the results a success as their candidate Papayiannis increased the number of votes obtained compared to the 2016 local elections.

Events to welcome in September