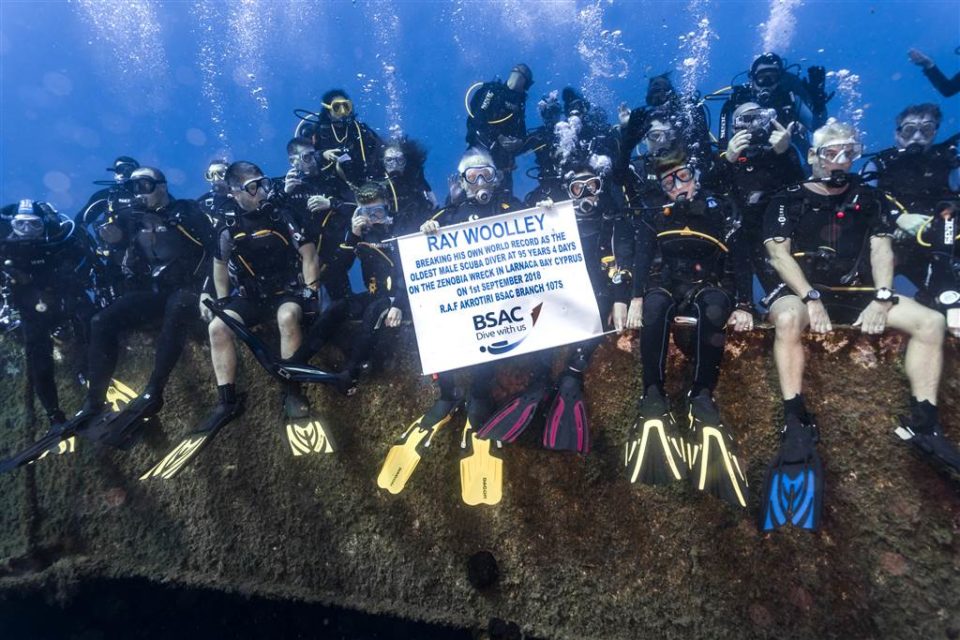 Ray Woolley, the world’s oldest scuba diver, will attempt to break his own world record on August 31, aged 96 and three days.

The dive will again take place at the famous Zenobia shipwreck off the Larnaca coast and he will be joined by dozens of local divers.

Zenobia, a Swedish roll-on-roll-off ferry, was fully loaded with 104 trailers and trucks when she sunk off Larnaka’s fishing harbour in June 1980. Today, she ranks as one of the top 10 wreck dives in the world.

“I’ve done this for the last two years, so I thought, why not do it a third time?” he told the Cyprus Mail.

Ray will celebrate his 96th birthday on August 28.

Last September the British veteran of World War II broke his own Guinness world record as the oldest scuba diver after diving to Zenobia where he dived for 44 minutes at a depth of 40.6 metres.

Woolley has garnered an international fan base and stars in a documentary, ‘Life begins at 90,’ about his life and his love of diving. The film which was produced and filmed in Cyprus has won a number of awards at International film festivals.

If his upcoming dive is successful, his film will be updated and he said he intends to do this every year until he is 100.

“I’m amazed to cause so much interest and it’s nice to set an example to show it is possible for anyone,” he said.

However, other record breaking dives in the future might not be as deep, he said, as he is planning to limit diving down to 40 or so metres this year, as he feels he is at an age to be ‘more sensible.’

“I think I will limit myself to 30m next year which will make my family happy,” he said. “After all, I do have to be a bit more sensible at my age.”