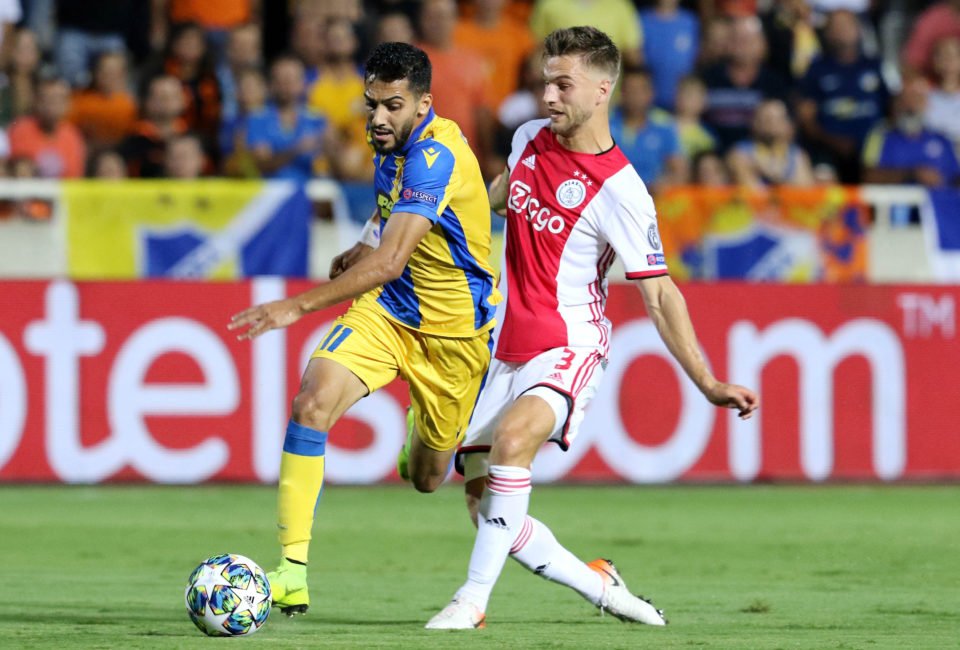 Joel Veltman of Ajax Amsterdam in action against Musa Al-Taamari of Apoel at GSP Stadium in Nicosia.

Apoel travelled to the Dutch capital to face Ajax for the second leg of the Champions League playoffs having earned a 0-0 in the first leg in Nicosia.

Despite the impressive performance and good result in Nicosia Apoel face an uphill battle at the Johan Cryuff Arena as they will have to score agianst the Dutch champions to go through unless of course the second leg also finishes goalless and the tie is decided in penalty shootout.

However judging from the number of chances created in the first leg in Nicosia by both sides this is a highly unlikely outcome.

Apoel’s German coach Thomas Doll is expected to use the same tactics he used 8 days ago, packing his midfield and trying to catch Ajax on the break. His tactics stifled the Dutch side who found it incredibly difficult to find a way though Apoel’s well drilled backline.

There will be one enforced change for Apoel as Savvas Gentzglou, who played just in front of the back four in Nicosia, is suspended, with one of Tomas de Vincenti or Brazilian Alef taking his place. Alef, a very mobile defensive midfielder would have been the obvious choice but Doll may opt for de Vicenti as the Brazilian returned to full training a few days ago and as he was nursing an injury and may lack match fitness.

The mood in the Apoel camp is one of reserved optimism. Apoel’s Brazilian midfielder Lucas de Souza said that all the players are well-aware of what to expect at the Johan Cruyff Arena and said,

“Ajax are one of the biggest teams in Europe but we shall not be overawed, we respect them, but do not fear them. We know that we shall be playing in front of a hostile crowd of nearly 55.000 but we trained hard throughout the week and we believe that we can get a positive result, after all we have achieved (positive) results under similar circumstances.”

Speaking to the Cologne based news agency, SID, Doll seemed to share his midfielder’s views, “we go into this game full of expectation and confidence, I firmly believe that we can do something special on Wednesday evening.”

Ajax were heavily criticized by the Dutch press following their indifferent display in Nicosia and will be looking for a much-improved performance to silence their critics.

Their general manager, former Manchester United goalkeeper Erwin van der Saar, tried to justify his sides lukewarm performance last week by saying that key players (de Ligt and de Jong) had left the club and the new arrivals had not yet settled in.

“We have great ambitions for this season, and we know that we have to perform much better on Wednesday” said van der Saar.

With Donny van de Beek out injured and Noussair Mazraoui suspended Ajax coach Erik Ten Hag may decide to give striker Quincy Promes his debut following his €15.7 million summer move from Sevilla FC. Promes missed the first leg through injury but has returned to full training the past couple of days.

It will be a tough 90 minutes for Apoel, and the word ‘tough’ may be a huge understatement, but if they manage hold out in the opening 20 or so minutes and start stringing a few passes as they did in the first leg, the pressure will start shifting over to the Ajax players.

A former Ajax footballer though, Andy van der Meijde gave Apoel zero chance of qualifying and went a step further and ‘swore’ that he will never watch a Champions League game again if Ajax fail to qualify.

The last time the two sides met in Amsterdam was in season 2014-15 for the group stages of the Champions League with Ajax defeating Apoel by 4-0.

The game that starts at 10.00pm will be officiated by the German referee Felix Swaye.

Cablenet Runs the Park for the 10th time

Cyprus will have opportunity to name exoplanet