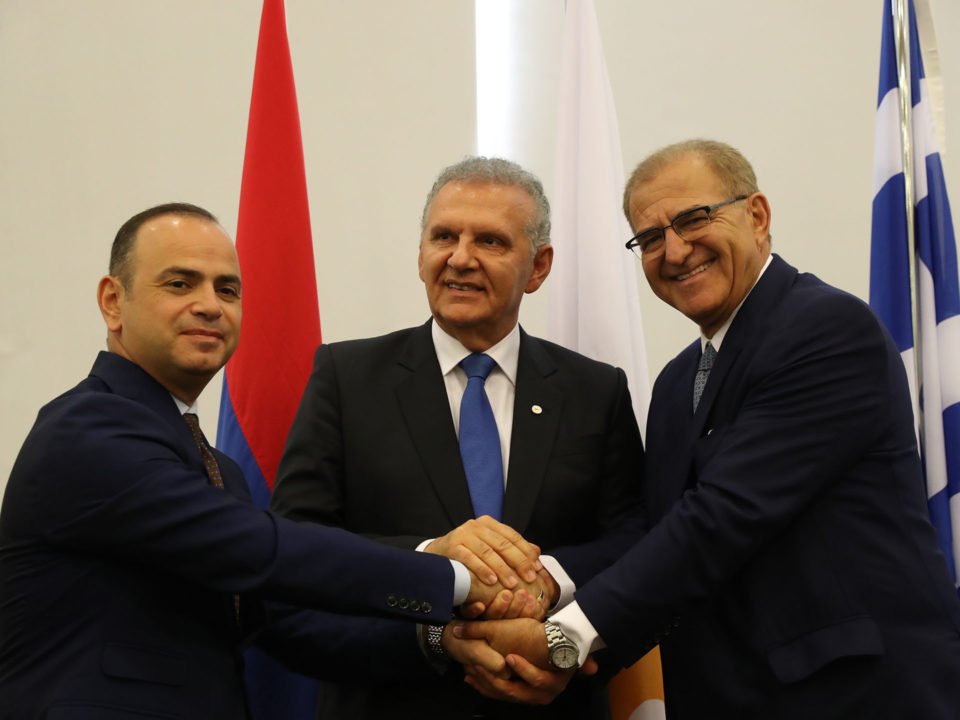 From left: The Armenian High Commissioner for the Diaspora, Zareh John Sinanyan. Photis Photiou the deputy minister of foreign affairs of Greece for the Diaspora Antonis Diamataris

A series of public and private meetings were at the centre of activities on the first day of the Overseas Cypriots Conference in Nicosia on Wednesday as members of diaspora organisations and officials from Cyprus, Greece, the UK and the US for the most part, descended on the Philoxenia conference centre.

While Greek Cypriot party leaders addressed the main conference, following the official opening by President Nicos Anastasiades on Tuesday night, meetings were also ongoing on the sidelines, in and out of the conference centre.

On the first official day on Wednesday, delegates were briefed, in a closed session, by Foreign Minister Nicos Christodoulides, on Cyprus’ foreign policy and the Cyprus issue.

A meeting of the central committee was held afterwards, chaired by Pomak president, Andreas Papaevripides. The delegates then had the opportunity to participate in discussions with leaders and representatives of political parties.

Presidential Commissioner, Photis Photiou, in addition to meeting a group of youths from the Cypriot, Greek and Israeli diasporas, also attended a trilateral meeting between Cyprus, Greece and Armenia, with the deputy minister of foreign affairs of Greece for the Diaspora, Antonis Diamataris and with the Armenian High Commissioner for the Diaspora, Zareh John Sinanyan.

“Through this cooperation we will activate the organised groups of our diasporas to promote the interests of the three countries” Photiou said.

Photiou also met the Minister for Romanians Abroad Natalia Elena Intotero. In statements after the meeting, Photiou said that they discussed how the agreement signed by the two countries on diaspora issues will be implemented.

He also said they discussed ways to encourage the organised diasporas from the two countries to hold joint events, and noted that special events would be promoted with the involvement of youth.

“The first major event will take place in October in Cyprus, where the cultures of the two countries will be promoted,” Photiou said, noting that it is expected to be a big event given that there are currently 40,000 residing in Cyprus.

Diamataris also visited the presidential palace for a meeting with Anastasiades where the Cyprus problem and diaspora issues were discussed.

A reception was due to be held at the presidential place later Wednesday for the all of the overseas delegates.

The conference wraps up on Friday.