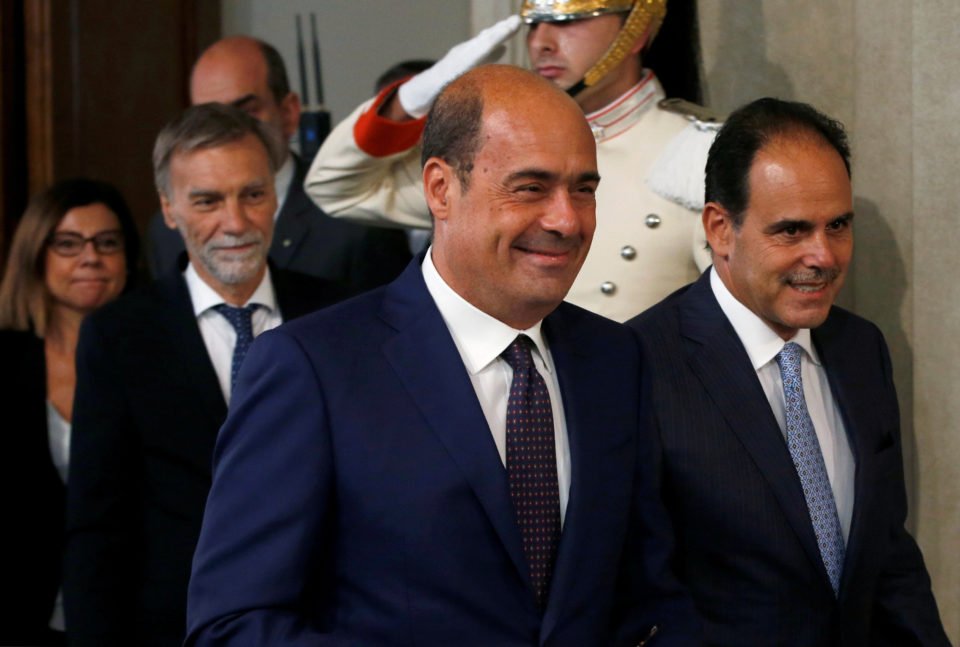 By Giselda Vagnoni and Angelo Amante

Italy‘s 5-Star Movement and the opposition Democratic Party (PD) said on Wednesday they would try to form a coalition, setting aside years of hostility to avert a snap election and ease economic uncertainty.

Following days of often tense and difficult talks, the leaders of 5-Star and the PD told Italy‘s president that the new government should once again be led by the outgoing prime minister Giuseppe Conte.

The two sides still need to agree on a shared policy platform and team of ministers, but 5-Star chief Luigi Di Maio and his PD counterpart Nicola Zingaretti said they had pledged to find common ground for the good of the country.

“We love Italy and we consider it worthwhile to try this experience,” Zingaretti told reporters. Speaking shortly afterwards, Di Maio said: “We made commitments to the Italians…and come what may we want to fulfil them.”

President Sergio Mattarella summoned Conte for talks on Thursday at 9.30 a.m. (0730 GMT), and was widely expected to hand him a fresh mandate.

The previous coalition made up of 5-Star and the far-right League collapsed this month when League leader Matteo Salvini withdrew from the alliance hoping to trigger an early election and cash in on his surging popularity.

But his move backfired when Conte refused to resign immediately, giving 5-Star and the PD time to try to overcome their fierce mutual animosity and agree to a government that had previously appeared impossible.

“The only thing that unites them is their hatred of the League,” Salvini said bitterly after meeting President Sergio Mattarella in an effort to convince him to call elections.

“Millions of Italians are being held hostage by a hundred parliamentarians who are looking to cling onto their posts.”

The prospect of a new administration led by Conte, an academic who is considered close to the 5-Star, has buoyed markets, which are betting that Italy will get a fiscally prudent government that will avoid confrontation with Europe.

The League is highly eurosceptic and had promised swingeing tax cuts for 2020 that economists warned could put unsustainable pressure on Italy‘s towering debt mountain.

However, a coalition pact is not yet a done deal. The tentative accord could still unravel with 5-Star and the PD yet to agree on other top government posts, besides the prime minister’s position, or reveal a common policy platform.

Unexpectedly, the founder of the 5-Star Beppe Grillo issued a statement late on Wednesday saying the ministers should be technocrats and not elected politicians — a suggestion that is unlikely to gain traction with the PD.

In an added complication, 5-Star has said it will put any deal with the PD to an online vote of its members. Many 5-Star supporters have taken to social media to denounce a pact with the centre-left and a ‘yes’ vote cannot be taken for granted.

As negotiations went down to the wire, one of the posts still in play was that of deputy prime minister. The PD wants this job for one of its own, now that it has agreed to Conte staying on as prime minister.

“The problem is that if there is a premier from the 5-Star it is fair that his deputy is from the PD,” PD deputy leader Andrea Orlando said on Twitter.

Conte, a virtually unknown lawyer when he was chosen by the League and 5-Star to lead their new government last year, was seen as a voice of reason within the outgoing coalition and has good relations with Mattarella.

An opinion poll in daily Corriere della Sera on Wednesday showed Salvini’s approval rating had plunged by 15 points since he pulled the plug on the government, and is now 16 points behind Conte’s.

Over 9kg of cannabis seized in Larnaca