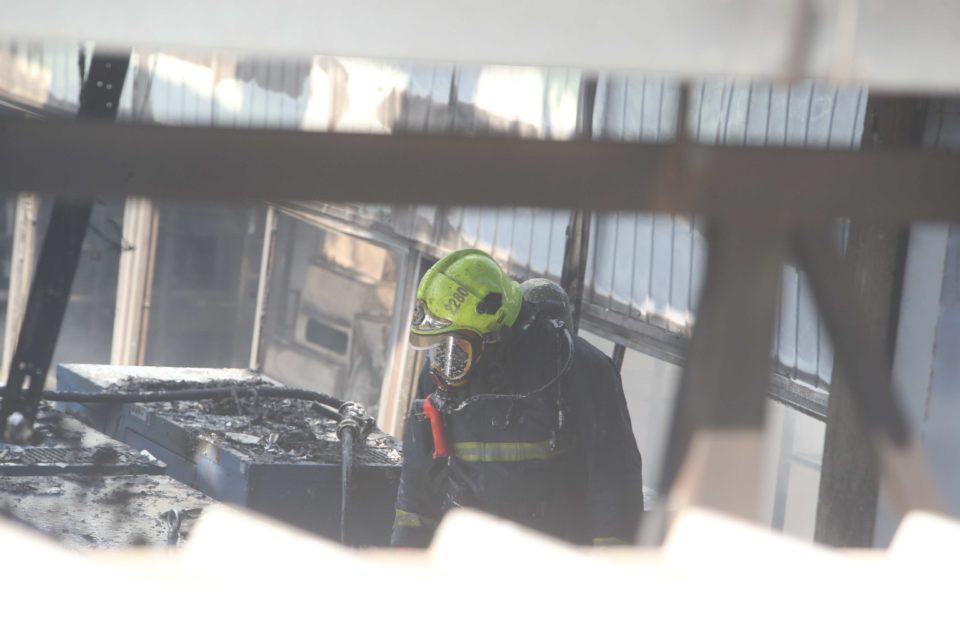 The factory fire in Strovolos on Thursday (Christos Theodorides)

POLICE and the fire service are investigating the circumstances under which a large fire broke out on Thursday in the industrial area of Strovolos that resulted in the death of employee Giorgos Athinodoros, 62, a father of four.

While there are allegations that the doors of the factory were closed and could not immediately be opened, former Mayor of Strovolos Savvas Iliophotou said chaos reigned.

“There is a lack of coordination when it comes to fires in industrial areas,” he said.

Nothing has changed since 2011 when he stressed the problem needed to be tackled, he told state radio.

“In 2011 there was a big fire in Ypsonas. For three days people were not briefed. On the third day the authorities issued an announcement that people should have been evacuated because the fumes endangered human life.”

This made him sit up and he started to investigate, discovering chaos, the former mayor said. He arranged a large meeting with all stakeholders such as the fire service, police and civil defence at which it was found that “everybody knew something but there was no coordination.”

The people present at the meeting decided there should have been a database where all factories and their uses are listed and that somebody needed to update this so it would not happen that the fire brigade was called to a fire to what they believed to be a furniture plant only to arrive and discover the building was now used to produce chemicals.

“I have been searching for what happened to this attempt. Is anybody following it up? And I found nobody has done anything about it.”

When the fire broke out shortly before 9am on Thursday, 10 people were in the factory, J.K. Switchboards, which produces electric generators.

Athinodoros was welding, most likely near flammable material, which caused the fire, police said.

He died in the flames, while two other employees, both in their 50s, who were trying to help him, suffered from minor burns on their hands.

The plant suffered extensive damage but the office space was saved.

Due to the fire Spyros Kyprianou road up to the Kalamios roundabout was closed in both directions but it reopened after an hour.

Plumes of smoke covered much of Nicosia in the morning but head of the A&E department at Nicosia hospital Andreas Eliades reported nobody was admitted to the hospital with respiratory problems.

Our View: Let Mokas do its job before questioning its integrity