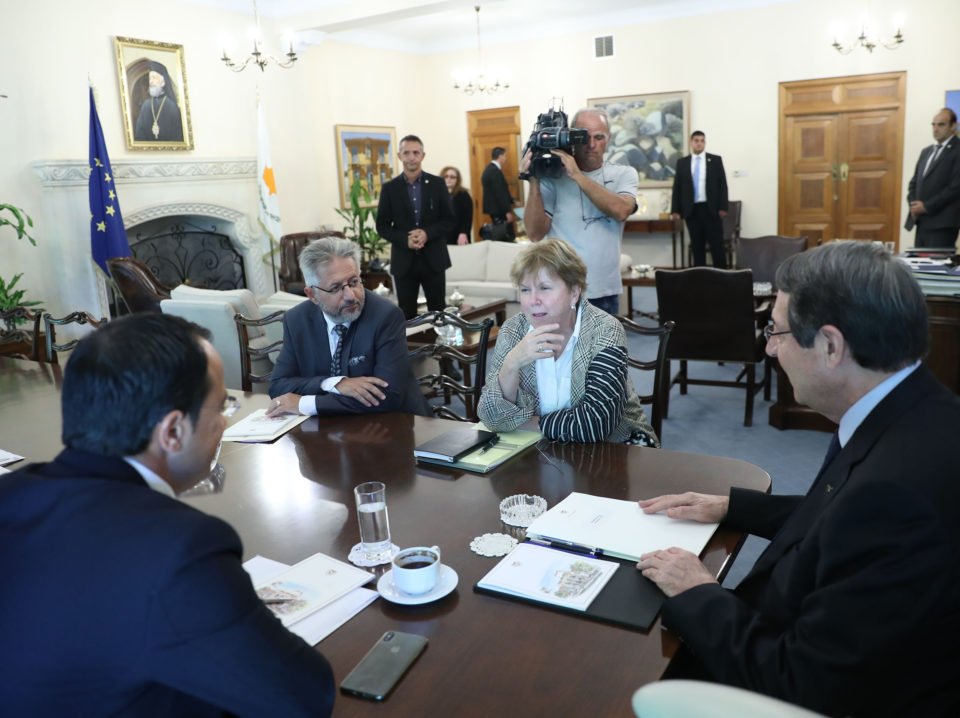 Jane Holl Lute at the presidential palace on Sunday (PIO)

A joint meeting between UN envoy Jane Holl Lute and the two leaders before she leaves the island on Monday has not been ruled out, government spokesman Prodromos Prodromou said on Sunday after President Nicos Anastasiades met the UN envoy for 90-minutes in the morning.

In line with previous practice, Lute did not make any statement after leaving the presidential palace following the 90-minute meeting with Anastasiades.

Prodromou, speaking later, said the meeting had been productive and that Lute would judge for herself whether and how to proceed on Monday before she departs. Nothing has been excluded, including a joint meeting with the leaders, the spokesman said.

“It was a productive meeting focused on Mrs Lute’s mission to prepare terms of reference and to resume negotiations,” Prodromou said.

Anastasiades had presented his positions and his approach to resuming negotiations. “And as he was certainly expected, addressed Turkey’s illegal actions in Cyprus’ EEZ as well as in general the challenges posed by Turkey such as the illegal interventions in Varosha.”

“Mrs Lute will meet the Turkish Cypriot leader, Mr Mustafa Akinci  in the afternoon, and there may be further consultations tomorrow, not excluding, if it would be helpful, a joint meeting.”

The spokesman dodged questions on what Lute thought specifically about Turkey’s actions, saying: “At the moment, given that the consultations are likely to continue tomorrow, it is better to limit ourselves to what we know today.”
Asked if Lute had brought any message from UN Secretary-General Antonio Guterres, or a proposal to break the deadlock, Prodromou said the envoy has instructions and a mandate from Guterres and was working on trying to form terms of reference between the two sides so that negotiations could restart.

“Mrs Lute will be here tomorrow and will announce accordingly whether and how the consultations will continue,” he added.

In this context, the president was ready and willing to continue working with both Lute and Akinci, the spokesman said.

“The president is certainly positive. He has been making proposals for a long time because the objective is to start substantive negotiations again.”

During their informal meeting on August 9, the two leaders agreed to continue working Lute on the terms of reference. They had also agreed to hold a tripartite meeting with the UN Secretary-General in September to plan a way forward.

But a government source said on Saturday that Turkey’s actions in Cyprus’ EEZ and the moves in Varosha by the Turkish Cypriot administration threatened the possibility of the talks resuming.

These actions may also lead to a cancellation of the proposed tripartite meeting with UN Secretary-General Antonio Guterres, the source said.

If the meeting goes ahead as planned, it is expected to take place on September 27 in New York, following the UN general assembly.

Pope stuck in elevator for 25 minutes, freed by fire brigade