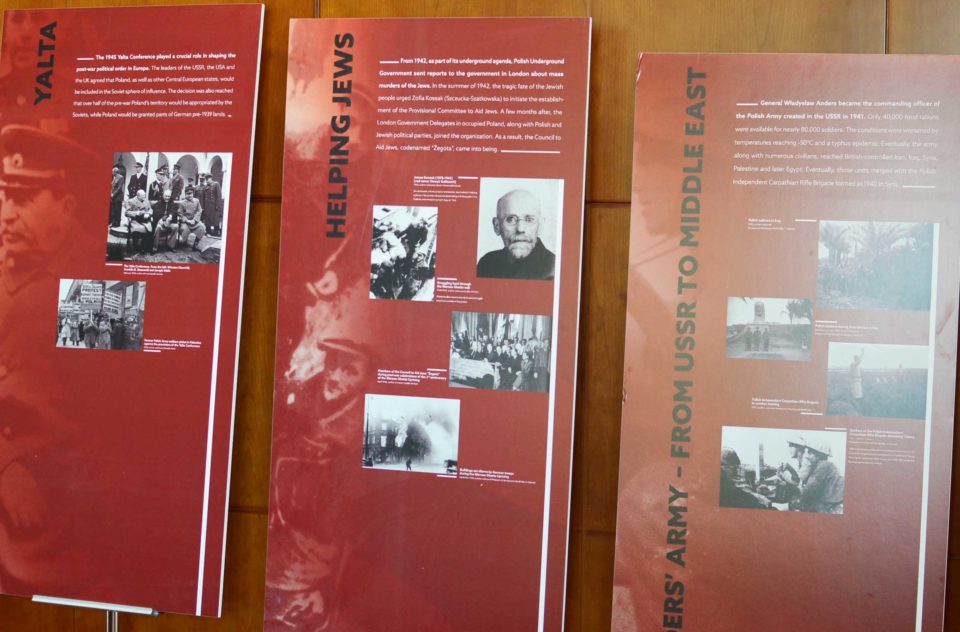 The tragic tenacity with which Poland fought the Nazi invasion on September 1, 1939 is the theme of a poignant photographic exhibition which opens in Nicosia on Monday.

Hitler’s invasion also marked the start of World War II, but for Poland the Nazi occupation was particularly catastrophic. Six million people died, the vast majority of them civilians, including about three million Polish Jews.

Entitled Fighting and Suffering – Polish citizens during World War II, the exhibition at CVAR is the Cyprus home of Poland’s pictorial remembrance simultaneously on show by over 80 Polish diplomatic missions in 62 countries.

“September 1, 1939 is a unique date for Poles, both historically and symbolically. As a result of German and then Soviet aggressions, Poland was once again to disappear from the map of Europe,” Polish ambassador Irena Lichnerowicz-Augustyn told the Sunday Mail.

“The date also marks the beginning of the greatest war in the history of humanity, which swept across almost all continents and caused the deaths of tens of millions of people, mostly civilians. After the war, Europe was in ruins, not only in material but also in moral terms.”

The exhibition also commemorates events that determined the outbreak of WWII, including the agreement between Nazi Germany and the Soviet Union (the Ribbentrop-Molotov pact) in August 1939 which envisaged the partition of Poland between the invaders. Under the pact, the Soviet Union gave the Third Reich the green light to attack Poland. “Moreover, a secret annex divided the spheres of influence in Central and Eastern Europe and directly prepared the occupation of Lithuania, Latvia, Estonia and forced Romania to assign part of its territory. The effect of the pact was also the USSR’s aggression against Finland, the so-called Winter war.”

The aim of the exhibition is to highlight the various forms of Polish resistance against totalitarian regimes of the 20th century, regardless of the price the country had to pay.

“We want to remind everybody that Poland was the first to resist the Third Reich and never really capitulated. For us freedom is the highest value and the memory of the tragedy of WWII is our common duty as an expression of respect and admiration for the sacrifice of our ancestors,” the ambassador said.

“It was also a period of heroic struggle, courage and bravery of millions of Poles. When the war ended there was probably not a single Polish family that had not lost a loved one and was not an eyewitness of the atrocities of war and occupation.”

For Poland, the end of war in 1945 did not bring the expected relief. Despite Poland’s contribution to the Allies’ war effort, it did not regain full sovereignty and was to become part of the Soviet Bloc for almost 45 years.

The exhibition was prepared by a team of historians from the Museum of the Second World War in Gdańsk for the Polish foreign ministry. The museum opened in 2017 and since then has received over one million visitors.

The exhibition also highlights Poland’s other invasion. While the Nazi invasion is well known, it should be reminded that 17 days later, Poland was also attacked from the east by the Soviet Union, as part of the Molotov-Ribbentrop pact. The exhibition makes a point of showing how Poland was victim of the two totalitarian ideologies of the 20th century and each imposed its own cruel ideology on the part it occupied, eliminating the Polish elite.

Until 1989 Poles could not talk about some tragic facts like the later deportations of Poles to Siberia or the massacre of Polish officers in Katyn by the NKVD.

“It is difficult to present the painful aftermath of the occupation in a few words, some of them emerged after years,” the ambassador said.

“Human and material losses were unimaginable. The experience of the Holocaust and Nazi terror exerted a trauma that many people could not cope with for the rest of their lives. The country was literally in ruins. People were starving. Warsaw, destroyed by the Germans, was the most damaged capital city in the world. The borders have been moved. A new political and economic system was established by force. My country was deprived of full sovereignty and – unfortunately with the full consent of the Western Allies – found itself in the Soviet sphere of influence.”

The message of the exhibition is that Poles never stopped fighting and never surrendered.

“Winston Churchill’s famous quotation ‘Never was so much owed by so many to so few’ was dedicated also to the Poles,” said the ambassador. “Immediately after the so-called Defensive Campaign in September 1939, many Polish soldiers managed to break through to France where they continued their fight. Polish airmen heroically defended the sky over the British Isles. My countrymen fought on all fronts of World War II.” Polish mathematicians were also crucial to breaking the Enigma code and Polish military intelligence obtained in February 1943 information about the construction of V-2 ballistic missiles by the Germans.

“These two discoveries changed the fate of the war.”

But beyond all that, there is also another aspect of the Poles’ struggle that the ambassador said has no equivalent in any other occupied European country: the resistance movement. “Of course, it also existed in other countries, but only in Poland was a fully functional Underground State created along with its own armed forces, parliament, judiciary and secret education. The price of resistance was very high”.

For the Poles there is very much a sense that their sacrifice is not fully acknowledged.

“For 30 years, the Polish authorities have been making every effort to present these events properly and comprehensively, in accordance with historical truth,” the ambassador said.

Cyprus also played a role. Over 500 Polish refugees found refuge in Cyprus in the early years of the war and the Cypriot regiment took part in the battle of Monte Cassino in 1944, which the ambassador said occupies a special place in Polish history. The regiment cooperated perfectly with the Polish II Corps, ensuring reinforcements and supplies in difficult mountain conditions. Cypriots also suffered casualties and two soldiers were awarded for merits during this battle.

I’ve seen all sorts of nasty stuff in the water