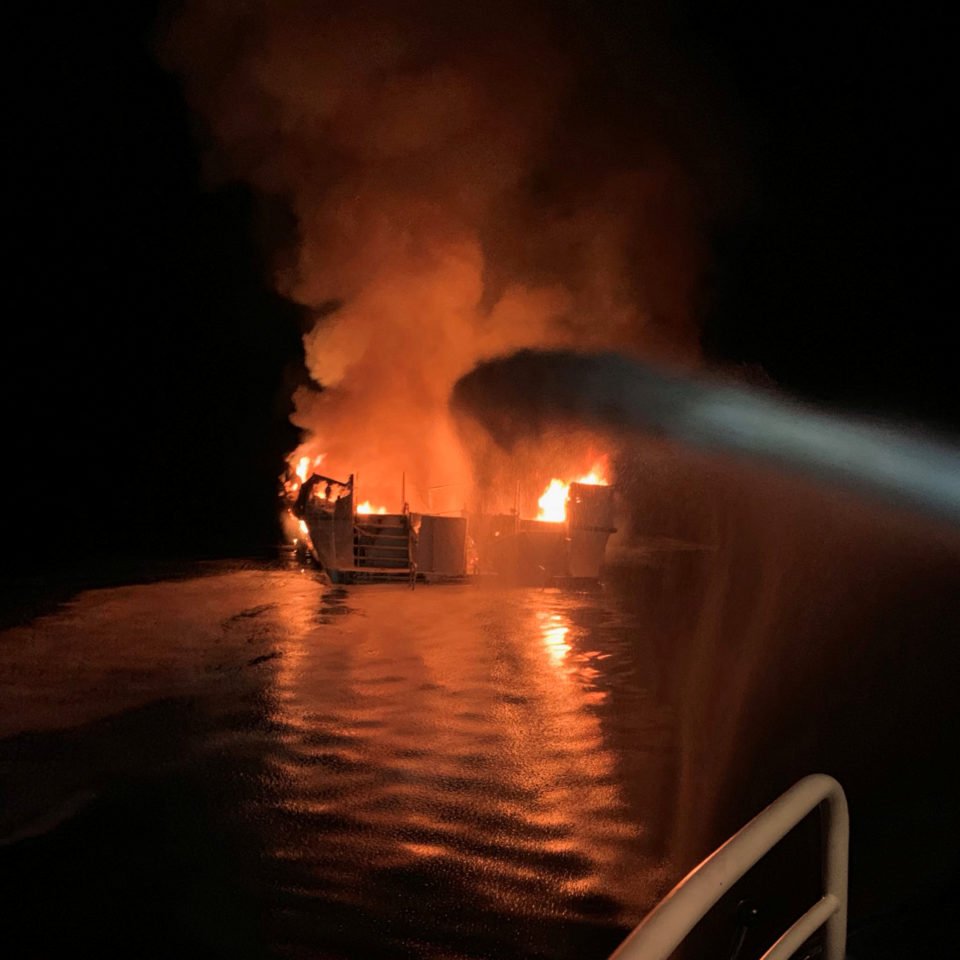 Four bodies were recovered on Monday by rescuers searching for 34 people missing after a pre-dawn fire sank a scuba diving boat off a Southern California island, a U.S. Coast Guard spokesman said.

No other information was immediately available about the genders, identities or the conditions of the recovered bodies, Coast Guard Petty Officer Mark Barney said by phone.

The search for the missing was still under way, he said.

Five crew members were rescued earlier by a “good Samaritan pleasure craft” after a distress call was reported at 3:15 a.m. local time as the 75-foot (23-meter) vessel burned about 20 yards (18 meters) off of Santa Cruz Island, the Coast Guard said in a statement.

“The crew was already awake and on the bridge and jumped off,” Coast Guard Captain Monica Rochester told a news conference at Oxnard. The passengers were all asleep below decks, according to information the Coast Guard received, Rochester said.

U.S. Representative Julia Brownley, a Democrat whose district includes Ventura County, told reporters in Oxnard: “They have determined that there are some bodies there. Devastating and tragic, and we still are hoping that there could still be some survivors.”

James Kohl, brother of one of the missing passengers, told KTLA TV in Los Angeles he was told there was a propane gas explosion on board, but Rochester said she could not confirm that.

Asked about that, U.S. Coast Guard Lt. Commander Matthew Kroll told CNN the cause of the fire was still undetermined. “It happened quickly enough so many people could not get off,” he added.

An image posted by the VCFD shows the vessel engulfed in flames. It sank in 64 feet (20 meters) of water just 20 yards off the Santa Cruz shore with just the tip of its bow showing, the Coast Guard said.

Of the five persons rescued near the coast of Santa Barbara, at least one had minor injuries, the Coast Guard said.

The diving boat was operated by Worldwide Diving Adventures, a Santa Barbara excursion firm which said on its website the Conception was on a three-day excursion to the Channel Islands, and was due back in Santa Barbara at 5 p.m. Pacific time on Monday.

If there are fatalities, a coroner’s inquest will be conducted by Santa Barbara officials, county Sheriff’s Office spokesman Lieutenant Eric Rainey said by phone.

Rainey said he could not confirm any fatalities but said he presumed there were some deaths because of “the extent of the fire and the fact that I think the rescued individuals told those rescuers that there were people on board that didn’t make it off the boat.”

“I’m crossing my fingers that there may be people on the shore,” he added.

The Red Cross of Central California said it was will open a reunification center in Santa Barbara. “We have trained mental health and spiritual care volunteers onsite for anyone who needs support,” it said on Twitter.