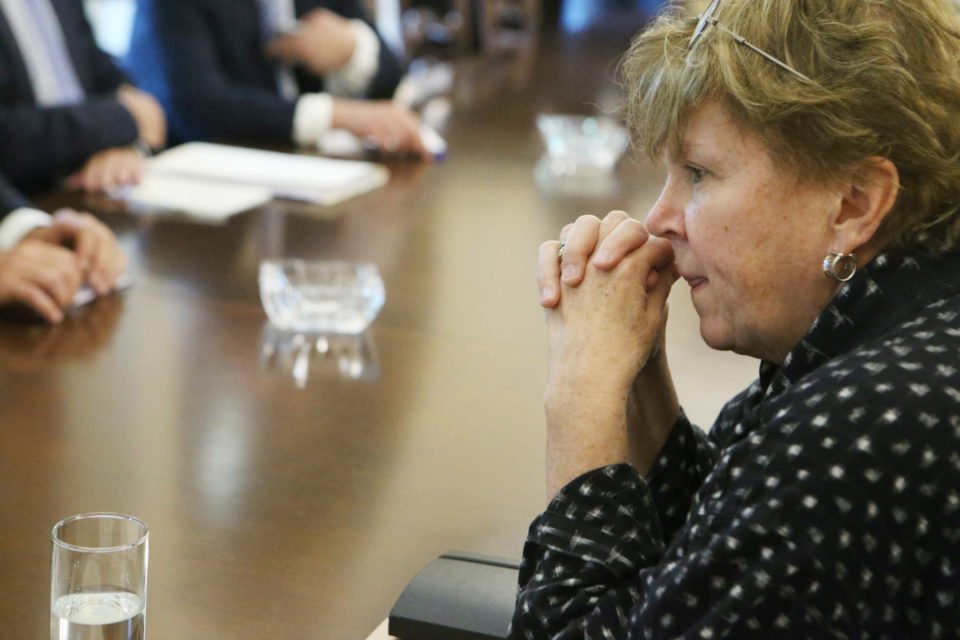 UN envoy Jane Holl Lute will stay in Cyprus for a further day on Wednesday to meet again with the leaders as an agreement on terms of reference for a new round of Cyprus talks appeared to be close on Tuesday.

The terms of reference have been described as a roadmap setting out the methodology and procedures to be followed in the event of new negotiations.

Agreeing on the terms will first pave the way for a meeting of the two leaders with UN Secretary-General Antonio Guterres in New York later this month on the sidelines of the UN General Assembly. He will then decide whether to officially invite the sides to new negotiations.

Government Spokesman Prodromos Prodromou made is clear on Tuesday that the terms of reference “are the points to be mentioned in the negotiations. They are neither a solution of the Cyprus issue nor the outcome of any negotiations,” he added. “We are very close and there will be results.”

Lute was initially due to leave the island on Monday after two meetings with each of the leaders. She stayed to meet them both again on Tuesday, President Nicos Anastasiades in the morning, and Turkish Cypriot leader Mustafa Akinci, later in the day.

In the midst of the to-ing and fro-ing, Anastasiades on Tuesday briefed the National Council on the meetings he has had with Lute since Sunday. Though ruling Disy and opposition Akel were positive, the reaction from the more hardline parties was for the most part negative, which is often an indication that a serious move towards new negotiations is underway.

Also a meeting next Tuesday in Athens between Anastasiades and Greek Prime Minister Kyriakos Mitsotakis to plan and coordinate the next steps is a sign of movement.

The fact that Lute is sticking around for at least another day is also an indication that the terms of reference must be agreed before she leaves, another sign that a new round of high-level negotiations is on the cards.

According to reports, Lute on Sunday merely listened to both leaders. At Monday’s meetings she began to record their positions. On Tuesday, she attempted to ‘lock it down’ but failed, though the leaders were close enough to warrant her staying another day at the very least.

Reportedly, the difference in opinion does not relate to the substance of the terms of reference but in the wording. The substance, reports said, concerns three pillars; the joint statement of the leaders in February 2014, the convergences that led to the negotiations in Crans-Montana in 2017, and the six parameters of what is termed the Guterres framework as a basis for the talks as submitted by the UN chief on June 30, 2017 during the Swiss negotiations.

“When the understanding between the two sides is confirmed, Ms Lute will put before the Secretary-General a draft paper of the terms and most probably he will call for a meeting which will agree on the next steps and the process to be followed,” Prodromou said.

Anastasiades’ latest meeting with Lute took place Tuesday morning prior to the briefing of party leaders.

Prodromou told reporters afterwards that the meeting had been “relatively short”. “There was productive cooperation on the wording of the terms of reference that Ms Lute will transmit to the UN Secretary-General,” he said. She will meet the president again at 9.15am on Wednesday and Akinci in the afternoon.

Asked whether talks would resume immediately after agreeing the terms or after the elections in the north in April 2020 where Akinci could very well be ousted, Prodromou said Anastasiades had been trying to have the talks resume for two years now “and we have reached a point where there is a positive momentum”.

Akinci’s main rival, Turkish Cypriot ‘foreign minister’ Kudret Ozersay, who has become Turkey’s mouthpiece in the north, was not happy on Tuesday with the developments. Ankara has repeatedly said since the failure in Crans-Montana that a Cyprus solution should be sought outside of UN parameters. Ozersay tweeted that those who are trying to “trap us” again in the same processes, on the same basis that has repeatedly failed “they are the ones who do not want the situation in Cyprus to change. “Those who make this mistake will not be forgiven by history, nor by the Turkish Cypriots,” Ozersay said.

Arrest after drunk driver leaves the scene of crash