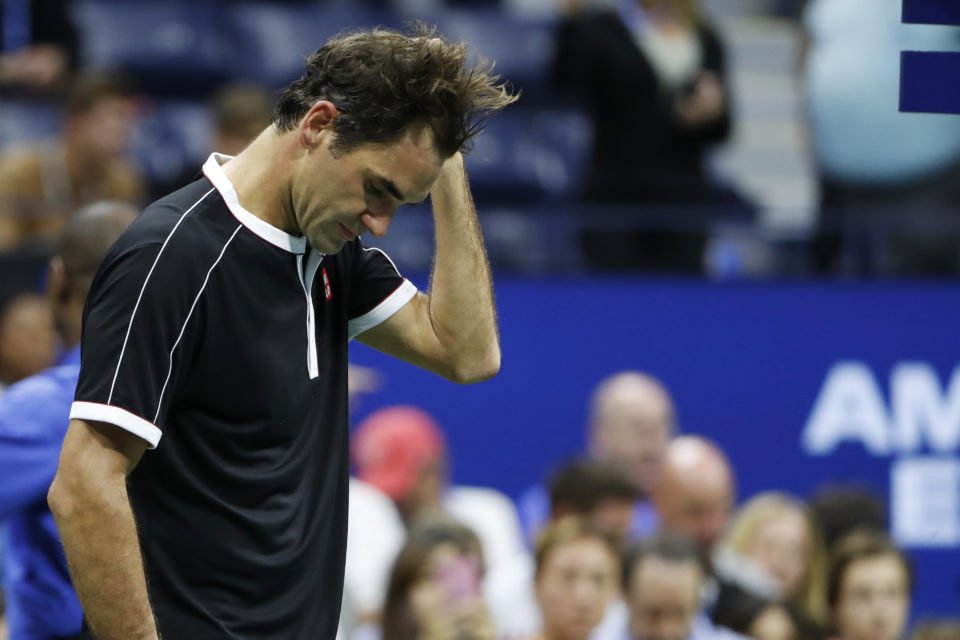 NEW YORK, Sept 4 (Reuters) – Fresh from a heart-breaking loss at the All-England Tennis Club, the abrupt end to Roger Federer‘s U.S. Open on Tuesday raised questions whether the 38-year-old can deliver on a record-extending 21st Grand Slam title.

Federer had hoped to shake off the agony of his most recent Wimbledon final, where the top prize slipped through his fingers and into the arms of frequent rival Novak Djokovic after he failed to convert two championship points.

But unseeded Grigor Dimitrov thwarted the effort in Flushing Meadows in a five-set marathon, leaving a puzzled crowd to wonder if the Swiss will ever again hoist a Grand Slam trophy.

“I don’t have the crystal ball. Do you?” quipped the third seed, after a reporter asked if he expected to win another Grand Slam title at his age.

“We never know. I hope so, of course. I think still it’s been a positive season. Disappointing now, but I’ll get back up, I’ll be all right.”

He batted down suggestions that his Wimbledon performance this year played a role in his surprise U.S. Open upset.

“I didn’t think of it. If you move on, it’s a thing of the past. I do remember playing good semis there, so it wasn’t bad. If I think of that, I’m, like, really happy,” he said.

For Federer, nothing is out of the question — and not without precedent: The oldest man to win the U.S. Open title was Bill Larned, who was 38 years, 8 months and 3 days old when he triumphed.

And past precedent is likely little comfort for Federer, who laid out for reporters an aggressive schedule of future competition.

“Laver Cup, Shanghai, Basel, maybe Paris, London. That’s the schedule for now. I don’t know if the team have other ideas or not,” said Federer. “I’m happy to get a bit of a break now, go back to practice, reassess and attack from there.”

In four months, he’ll renew his effort to add to his Grand Slam coffers at the Australian Open, where he collected his last title in 2018.

“(I have) got to take the losses. They’re part of the game,” said Federer. “Looking forward to family time and all that stuff, so… Life’s all right.”

Temperatures to drop, some rain on the cards