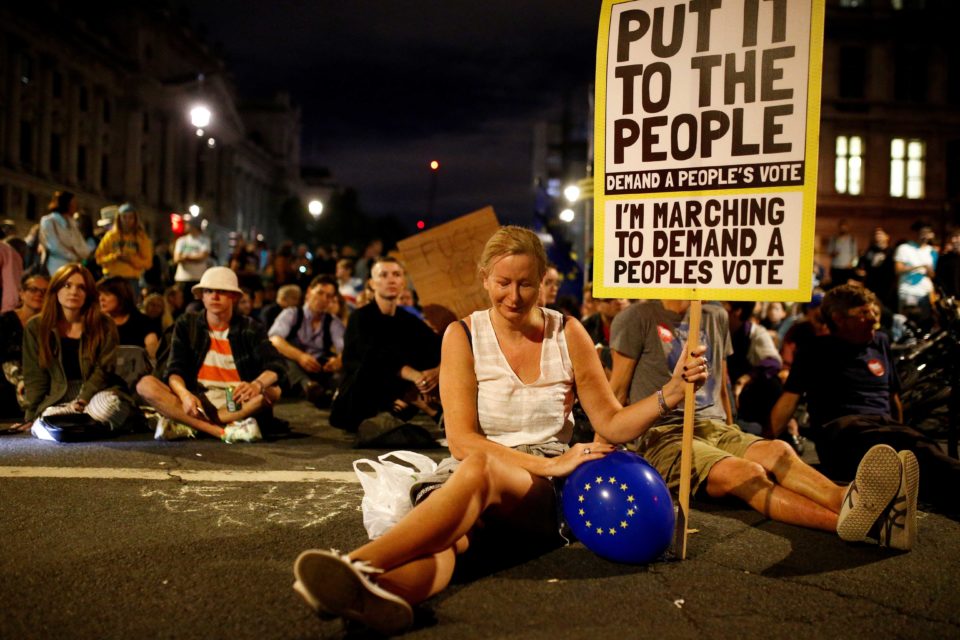 A demonstrator reacts during an anti-Brexit protest, outside the Houses of Parliament in London, Britain August 28, 2019. REUTERS/Henry Nicholls

What on earth has happened to Brits? And how? And when?

We Brits were not brought up to be like this. What’s gone wrong? Two full pages of newsprint – not in the Mirror or the Sketch but, astonishingly, in The Times. A huge leaked spread of everything that could be dreamed up about what could possibly go wrong when we leave the accursed EU. And suddenly some folk are whimpering like sick puppies.

If all the guff is to be believed the causes of the timidity are because we may, just may, for a few weeks have to face things like ‘a shortage of certain fresh foodstuffs, passenger delays on the railways, a risk to fuel supplies, disruption of financial services, queues of lorries in Kent and limited availability of some drugs.’

How knee-knockingly terrifying are these things, I ask you?

I was a young lad when Hitler began his war. I well remember the attitude of the ordinary folk then. Certainly they were apprehensive. Certainly they had no wish for men to war and women to weep but, even further from their minds, was any suggestion at all of giving up. There were no street demonstrations. There was steadfast courage, a wonderful closing of the ranks, and a determination to defend our island whatever the cost, as someone or other once put it.

We struggled through six years of war, for all that time I never saw a banana or a potato crisp or even a Rowntree’s fruit gum. Mums went to the factories and onto the land. Dad’s went off to war. We kids tried to replace the missing menfolk. I learned to plough. Lads had ropes to stretch between trees to decapitate motor cyclists, and pieces of wood with nails in to burst tyres, and stout sticks with metal points lashed on. We were all determined to do our best when the enemy landed.

I remember my grandfather at the age of over eighty prodding the butt of a German pilot who had crash-landed in our valley during a raid, with the sharpened tines of his pitchfork. I was there when the pilot cried out that his co-pilot had been wounded, and Grandad yelled ‘Well bugger him!’

This is the way we very ordinary folk reacted to threats and malicious spite from our recent friends on the continent. The worst we face now is some orders of magnitude less.

Europe and its democratically-but-secretly elected top dogs has cheated and connived and conned the nations and people of Europe, with growing success and in surreptitious increments, for the last twenty or so years. Then, when we finally saw the light and realised we were being seduced into giving away our centuries of freedom they start treating us like errant children or naughty schoolboys. They gave our admittedly rather ineffective erstwhile Lady Prime Minister the most degrading treatment she had ever known. One had no difficulty seeing them sneering and enjoying her ignominy while trying to sell silly Brussels dreamwork as if it were a sensible way to ease the sandpaper of parting.

And now, as a final treason, elected members of our own parliament – who are on oath to defend our nations democracy – do everything they can either to delay or, with a bit of luck, actually to deny us, the people, our democratic vote. To the gallows with them all.

In my nightmares I see the combined military forces of Germany and France acting together in their plans to invade our island and force its submission. They’ve both tried before, and failed miserably. I don’t think they have forgotten or forgiven. And don’t for a second imagine that they wouldn’t toy with the idea of one more try.

To all the caponised whiners and feeble chickens I suggest, get onto YouTube and hear Churchill’s broadcast to the people of June 4th, 1940.

If the need arises I, for one, will be there. And if it kills me they can bury me standing up and facing across the Channel. Freedom is worth whatever it costs.

And as for the shivering and trembling white butterflies of the Westminster mob who would see us smile at our chains I can think of only one plea: Come back Mr.Cromwell, all is forgiven.