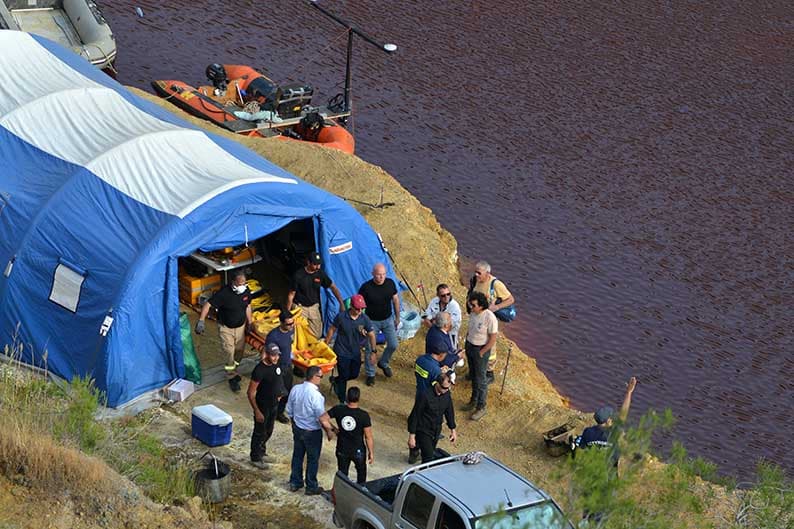 File Photo: A body is taken out of the temporary facility at Mitsero red lake (Christos Theodorides)

An award-winning weekly drama series in the Philippines, ‘Tadhana’ will feature two special episodes based on the serial murders in Cyprus which were uncovered in April, Philippines’s leading TV network GMA announced.

The episodes come “after another successful year of featuring the many stories of struggle, failure, hope, and triumphs of Overseas Filipino Workers (OFWs),” GMA said.

The first of the special episodes will be aired on September 7 and the second later in the month.

The trailer shows the Limassol wine festival and the murderer, a military officer. Media reports say scenes include the killer strangling his victims, wrapping them in a white sheet, and placing the bodies inside suitcases, events that are partly based on the actual case in Cyprus.

The stories are based on the first-ever case of serial killings in Cyprus. Army officer Nicos Metaxas, 35, confessed to murdering five women, all domestic workers, and two of their children aged 6 and 8 between 2016 and 2018. All of his victims were from overseas – from Romania, the Philippines and Nepal.

In the past two years, Tadhana has continued to build an audience, hitting more than one million followers on Facebook. It has also received various awards, including the TV journalism award for ‘Best TV Series on Migration’ at the 2017 Migration Advocacy and Media (MAM) Awards by the Commission on Filipinos Overseas.

Headmaster should follow the law, whatever that may be