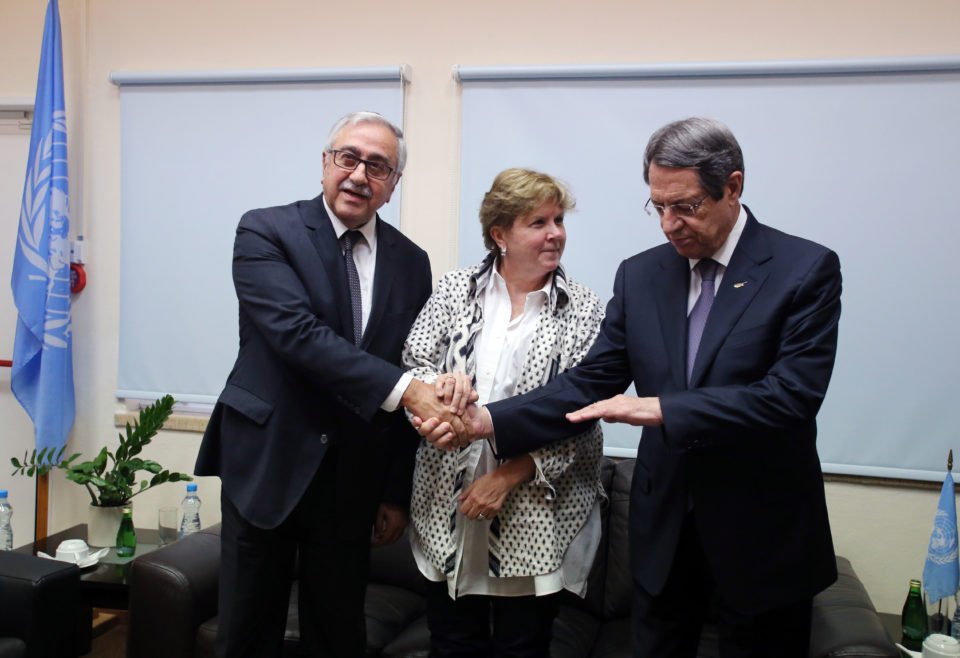 Jane Holl Lute with the two leaders on Friday (CNA)

By Lizzy Ioannidou and Evie Andreou

After six rounds of separate consultations with UN envoy Jane Holl Lute and an informal joint reception on Friday evening, the two leaders were unable to agree on the terms of reference that would form the basis of new talks.

“There is no disappointment, we do not give up hope, it is an ongoing process,” President Nicos Anastasiades told reporters on his return to the Presidential Palace following the reception hosted by Lute in the UN Protected Area at the old Nicosia airport.

Back-to-back separate meetings held by Lute with the two leaders since Sunday were unable to overcome a sticking point that emerged between the two sides earlier in the week, reportedly involving the co-governance issue, with the joint meeting of the leaders on Friday evening, which marked the end of this round of consultations, proving equally fruitless.

According to Anastasiades, no attempt was made to resolve the stumbling blocks during the informal reception, where the leaders only shared “friendly exchanges and banter”.

Though Lute is now set to depart from the island without the desired result, Anastasiades said she expressed hope that the leaders would be successful in fostering an effective dialogue.

Consultations with Lute were “intense and constructive,” Turkish Cypriot leader Mustafa Akinci said after the reception, but noted that the aim was to finalise the terms of reference,  which has not been achieved.

Both sides agreed to continue efforts towards achieving this goal, Akinci said. “We will continue working so that a successful result can be achieved from the work that has been done…which will lead to a new starting point.”

In her first statement since assuming her role as UN envoy for the Cyprus problem over a year ago, Lute said: “I want to thank both of the leaders. We’ve had serious discussions that have been quite focused.”

“This is an effort that is ongoing, and both leaders have committed to continuing the process,” Lute added.

On Friday morning, Lute met first with Turkish Cypriot leader Mustafa Akinci and at around 11.15am she arrived at the Presidential Palace for a meeting with Anastasiades. Their meeting lasted for about an hour.

Focus will now be shifted to Lute’s next move. She is set to hold meetings with the guarantor powers Turkey and Greece before attempting to find ways to bridge the positions of all sides.

She is expected to draft a report that will be handed over to the UN Secretary-General Antonio Guterres, who will then be called to decide on the way the procedure would move forward.

In order to avoid the termination of the procedure for the terms of reference, Lute will also be presenting Guterres with two documents; one by the Greek Cypriots the other by the Turkish Cypriots.

State broadcaster CyBC said that the text of the terms, which was initially half page long, has now reached one page and a half.

Lute was on the island for consultations with the two leaders in a bid to reach agreement on the terms of reference that could pave the way for the resumption of talks on the Cyprus problem.

Hopes were high that the leaders would agree on the terms, as that would lead to an invitation by Guterres for a joint meeting to discuss the next steps.

Despite not reaching the desired outcome, Anastasiades said that this has not compromised his chances of meeting Guterres, who he said he will definitely meet. Akinci similarly said that while an exact date for a tripartite meeting between Guterres and the two leaders has not been set, such a meeting remains in the plans of the UN Secretary-General.

In the meantime, Turkish Foreign Minister Mevlut Cavusoglu is expected to arrive in the north on Saturday. No information was given on Cavusoglu’s schedule for the weekend. He is to attend a meeting on Monday morning when Akinci will brief the heads of the ‘parliamentary’ parties on the latest developments.

Later in the day, ‘foreign minister’ Kudret Ozersay will host lunch in his honour and later on he will meet with ‘prime minister’ Ersin Tatar. He is scheduled to depart the island on Monday afternoon.

Our View: Hypocrisy on show in purchase of state cars