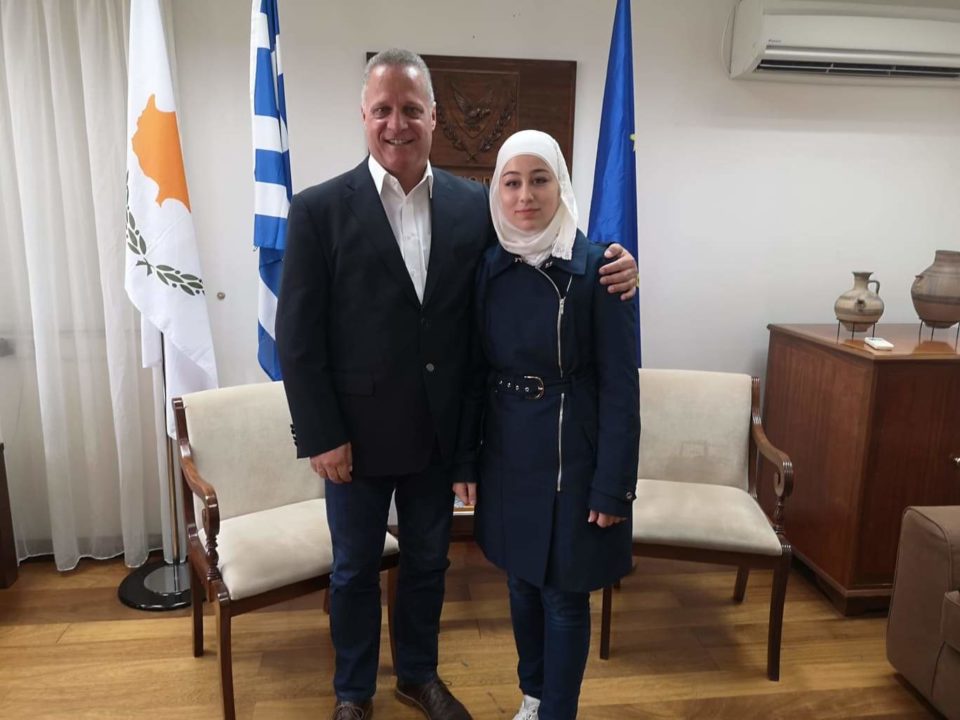 Education Minister Costas Hambiaouris said on Saturday the issue of a Muslim pupil who was kicked out of her high school on Friday by the headmaster because she was wearing a headscarf was resolved and that the girl would go back to school on Monday.

He was speaking after meeting the girl and her father, as well as the headmaster in question.

Hambiaouris, who tweeted photos from the meeting, said the girl would go back to school and that she had his support but also that of her headmaster.

“The issue has been resolved in the best possible way for the benefit of the pupil, of her classmates and of the school,” Hambiaouris said.

He made clear however that the disciplinary probe into the incident that was launched on Friday would continue.

The girl, Alaa, a refugee from Syria and has been living in Cyprus for the past five years, said after the meeting that she was satisfied by what had been said during the meeting.

“On Monday I will go back to school and focus on my classes,” she said, speaking fluently in Greek.

The issue emerged on Friday, the first day of school for secondary school pupils, after a brief video taken on a mobile phone circulated on media showing a man escorting a girl outside the school in a stern manner while pupils jeer on him and disapproving of the way he treated their fellow pupil.

Alaa, who is in her final year, had told Alpha TV on Friday that she was very embarrassed by what had happened.

She said that as soon as she entered the school, he called her over and asked her to remove her headscarf.

“That is why I felt embarrassed, he was shouting at me in front of everyone,” she said, adding that she started crying.

“I told him I had no problems so far during the three years I have been wearing it,” she said.

The teenager said it was her own choice to don the headscarf.

“We all have the right to believe in what we want,” she said.

She said she had gone to the education ministry wither father after the incident and received permission to change school but later she decided it would be best to remain there since this was her last year and she needed to focus on her graduation exams.

The headmaster in question, Loizos Sepos said after the meeting with the minister that he would welcome Alaa back to school on Monday, with her headscarf.

“I will welcome her with love, support her and guide her as I have been doing all these years all pupils,” he said, adding it was “an unfortunate incident.”

Earlier in the day, Hambiaouris had said his ministry had zero tolerance for racism and xenophobic behaviour.

He said that if it emerged in the disciplinary probe that there had been misconduct, then responsibilities would be attributed.

Some of the pupils at the Apostolos Varnavas lyceum in the Nicosia district where the incident took place have called for abstention from classes on Monday in protest against the headmaster whom they called “conservative and racist”.

They said the protest should continue until he was removed from his post. Hambiaouris said however that since the matter was closed there was no need for any such actions.

Sepos had defended his action on Friday citing school regulations stipulating that pupils must not enter the school grounds with their heads covered.

He told Sigmalive that the same regulation is applied in the winter when pupils come to school wearing hats. “Why should there be an exception to the rule?” he asked.

He added that just as they don’t allow pupils wearing in school massive crucifixes, the same is true in this case. He argued that he was a headmaster in other schools where there were Muslim pupils but none of them was wearing a headscarf.

Commenting on the fact that his actions were deemed racist, he said: “Schools do not raise Taliban”, according to the news portal. “It is our honour to receive (pupils) that have other religions but they must respect the rules,” he said.

From a political point of view, he argued, those same regimes that have prompted many Muslims to leave their countries of origin were forcing women to wear the headscarf.

But according to the head of Oelmek secondary education teachers’ union, Costas Hadjisavvas, the regulations are clear and the headmaster should not have acted the way he did.

He said it was an “inexcusable act” by such an experienced educator.

Secondary-school parents’ organisations also expressed their anger over the incident.

The headmaster’s action was also condemned by Children’s Rights Commissioner Leda Koursoumba, who told CyBC it was a “glaring incidence of racism.”

It was also condemned by political parties except for far-right Elam. The party’s youth branch said in a written statement that they would not allow Cyprus to be turned “into an Islamic caliphate.”

The party said that the headmaster was merely following the school’s rules and turned the girl away because she had refused to abide by his request to remove her headscarf.

Folklore dances from the Mediterranean