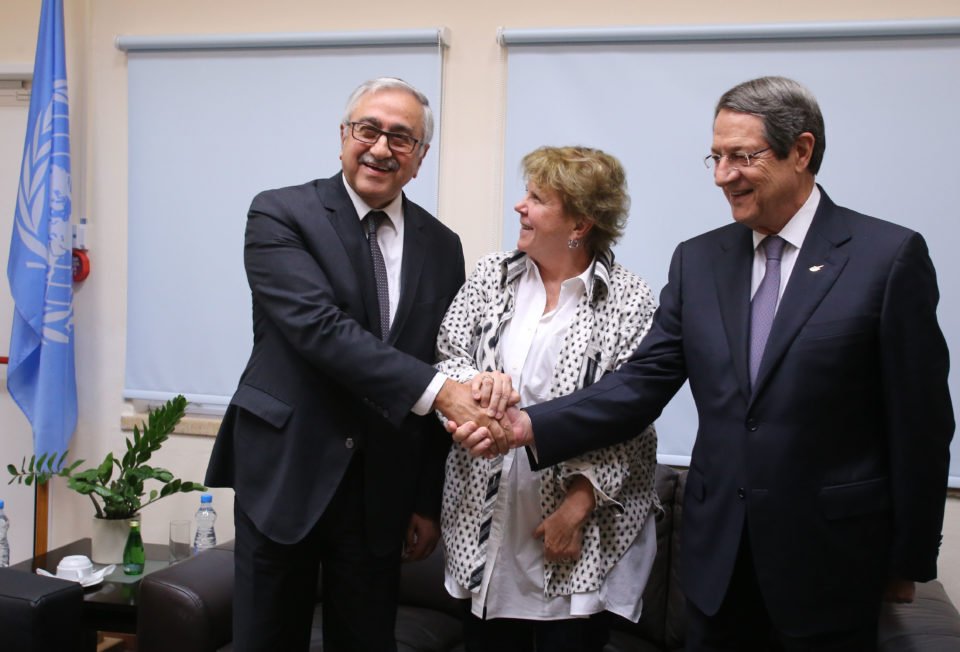 Following the failure of the leaders to secure terms of reference for new Cyprus negotiations after week-long shuttle talks UN Secretary-General Antonio Guterres is expected to have separate meetings with them in New York at the end of the month to decide the next steps.

According to the Cyprus News Agency on Saturday, Guterres will have separate meetings with President Nicos Anastasiades and Turkish Cypriot leader Mustafa Akinci and he will decide if he will call a tripartite meeting that would likely take place at the beginning of October.

By Friday it was clear the two leaders had been unable to agree on the terms of reference that would form the basis of new talks. This followed six rounds of separate consultations between Lute and the two leaders, and an informal joint reception hosted by UN envoy Jane Holl Lute on Friday evening who spent four days longer on the island than originally scheduled.

The leaders had been unable to overcome a sticking point which emerged earlier in the week, reportedly involving the co-governance issue.

Lute is now expected to brief Guterres on her contacts and also meet with guarantor powers Greece and Turkey in New York later this month to determine where they stand.

The two sides have so far agreed on that the terms of reference will be based on the 2014 Joint Declaration, the six parameters of the Guterres framework as presented on June 30, 2017, and the convergences that led to the talks in Crans-Montana in 2017.

Anastasiades said after the reception hosted by Lute in the UN Protected Area at the old Nicosia airport that there was no disappointment. “We do not give up hope, it is an ongoing process.”

But while the government appears satisfied by the result, the opposition on Saturday flagged it as yet another failure.

Akel parliamentary spokesman Giorgos Loukaides said that while Guterres himself had assessed that the sides were close to reaching an agreement in 2017 at the talks in Crans-Montana, “more than two years later, not even the preconditions have been fulfilled for the resumption of the talks.”

He said there was an absence of comprehensive information on the reasons for the failure of Lute’s latest effort.

“We do know however how important it is this time for Mr Anastasiades’ narrative to be along the same lines as that of the UN Secretary-General,” he said.

Loukaides warned that it seems the window of opportunity for the resumption and completion of the negotiation process would not remain open much longer.

“We expect everyone, and in particular Mr Anastasiades, since we cannot determine the attitude of the Turkish Cypriot side or Turkey, that he will act within the framework Mr Guterres has clearly set out.”

The Solidarity Movement said the outcome was once more to the detriment of Cyprus and its people. On the one hand, Anastasiades was able to shake off him the pressure that he did not want any talks and now he will “be at peace with himself” for the next three months.

On the other hand, Akinci secured more concessions by the Greek Cypriot side which he is expected to cash in during the upcoming elections in the north, the party said.

It added that in the meantime, Turkey will carry on unobstructed with its own games.

The party also took a swipe at the new initiative ‘Decision for Peace’, a group consisted among others of veteran politicians that launched its operation this week in a bid to push for a bi-zonal bi-communal federal solution. Without explicitly naming the group, it spoke of “peacemakers that emerged from the moth balls to point out to us how to win back our lost freedom and dignity.”

The Greens said that Lute was leaving without achieving anything while Turkish Foreign Minister Mevlut Cavusoglu, who was expected in the north on Saturday, was arriving “full of provocation” to politically reinforce the hardliner duo that is currently in ‘government’, ‘prime minister’ Ersin Tatar and ‘foreign minister’ Kudret Ozersay.

The party expressed pessimism over the success of a new meeting between the leaders and Guterres arguing that they were not even able to agree on the headlines of the text on the terms of reference, “unless of course a new concession emerges to again satisfy the demands of the powerful side.”

Akinci said on Saturday after briefing political leaders in the north on his consultations with Lute that it would be wrong to say that no developments had taken place.

“We are not after a process like before. This will be a new process it will not be endless or open-ended and drag on forever” he said according to media reports in the north.

In response to criticism from his opposition, he said that political parties should not be biased when they look at the situation.

In the meantime, Nicosia is reportedly waiting to hear Cavusoglu’s positions.

Cavusoglu is meeting on Monday with Akinci and the Turkish Cypriot political leaders. He is to attend a meeting on Monday morning when Akinci will brief the heads of the ‘parliamentary’ parties on the latest developments.

Later in the day, Ozersay will host lunch in his honour and later on he will meet with Tatar. He is scheduled to depart the island on Monday afternoon.

The Wolves in the theatre