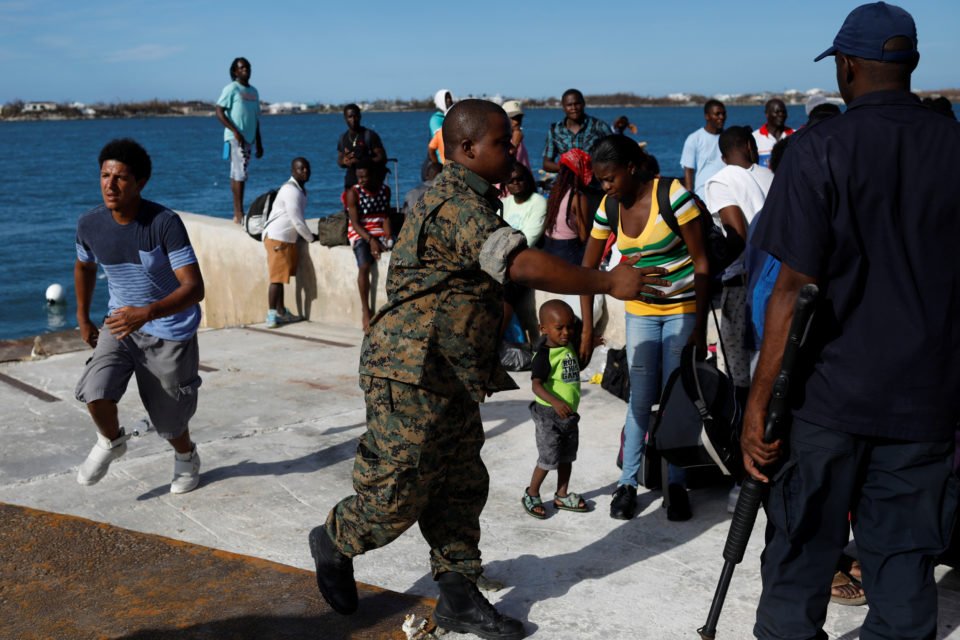 A soldier controls the crowd at Marsh Harbour Government Port during an evacuation operation after Hurricane Dorian hit the Abaco Islands in Bahamas.

Charities, government agencies and even cruise ships loaded with supplies and volunteers rushed emergency aid to the storm-ravaged Bahamas on Saturday amid fears of a “staggering” death toll left in the wake of Hurricane Dorian.

Bahama leaders believe hundreds and perhaps thousands remained missing in the archipelago nation of about 400,000 people, even as the official death toll rose only to 43 as of late on Friday.

U.S. President Donald Trump’s administration requested airlift and logistical support from the Defense Department on Friday to support relief efforts for the Bahamas, the Miami Herald and other media reported.

The U.S. Coast Guard and other agencies have already provided help with U.S. Northern Command chief General Terrance O’Shaughnessy arriving in Nassau on Friday to assess the needs.

Hurricane Dorian, the most powerful hurricane on record to hit the Bahamas, parked itself over part of the archipelago for almost two days earlier this week, pummeling it with Category 5 winds, with some gusts topping 200 mph.

The most powerful hurricane on record to hit the Bahamas leveled some neighborhoods, swallowed others with storm surges and caused what one official described as a “staggering” number of deaths.

Dorian also devastated parts of the Outer Banks Islands in North Carolina, on Friday and it continued to push northward along the U.S. Atlantic coast early on Saturday.

It brought tropical storm force winds to southeastern Massachusetts and Nantucket Island and Martha’s Vineyard on Saturday morning, according to an advisory from the Miami-based National Hurricane Center.

It is expected to make landfall in Canada’s Nova Scotia province on Saturday night with winds of about 90 mph (150 kph) and leave up to 7 inches of rain before pushing further east as a weakened post-tropical storm by Sunday, the NHC said.

The Bahamas hade only a slight, 10 percent, chance of rain Saturday that was not expected to hamper relief efforts as Bahamas Health Minister Duane Sands spoke of “a tremendous loss of life.”

The medical chief of staff at Princess Margaret Hospital in Nassau said two refrigerated, 40-foot trucks would be needed to hold the “staggering” number of bodies likely to be found.

The United Nations estimated 70,000 people were in “immediate need of life-saving assistance” such as food, water and shelter. The U.N. World Food Programme was airlifting storage units, generators, prefab offices, and satellite equipment as well as 8 metric tonnes of ready-to-eat meals.

The American Red Cross said it had committed an initial $2 million help the Bahamas recover from the hurricane, with food, water and shelter and other necessities.

“Our relief operation is growing, but we are also facing serious challenges in terms of delivering aid,” Red Cross spokeswoman Jennifer Eli said. “Even search-and-rescue choppers haven’t been able to reach some people because there’s no place to land. These challenges are affecting everyone.”

Near an area called The Mudd in Marsh Harbour, a commercial hub, a Reuters witness reported most houses leveled, the body of a man lying near a main street and dead dogs floating in water. Some residents were leaving the area with meager possessions, while others were determined to remain.

The U.S. Coast Guard has rescued 295 people since Dorian began, the U.S. Embassy in Nassau tweeted.

Relief groups were focusing on getting doctors, nurses and medical supplies into the hardest-hit areas and helping survivors get food and safe drinking water.

Norwegian Cruise Line Holdings Ltd. committed $1 million for hurricane relief and its ship Norwegian Breakaway left Miami on Thursday with supplies donated by the company and its employees, in addition to items collected by the City of Miami and various charities.

Celebrity chef José Andrés and members of his nonprofit, World Central Kitchen, were on the ground in the Bahamas to aid hurricane survivors by preparing thousands of meals.

The risk of outbreaks of diarrhea and waterborne diseases is high as drinking water may be tainted with sewage, according to the Pan American Health Organization, which described the situation for some people on Abaco island as “desperate.”

Claudin Loriston, 39, a Haitian carpenter, said he and his three young children were among the “lucky ones” to get on a plane out of Abaco. He said he had no documents with him, but would try to get a job to support his family.

“There are too many dead bodies there. The government needs to remove everyone from the island, the smell is everywhere, it’s in the water.”

Folklore dances from the Mediterranean