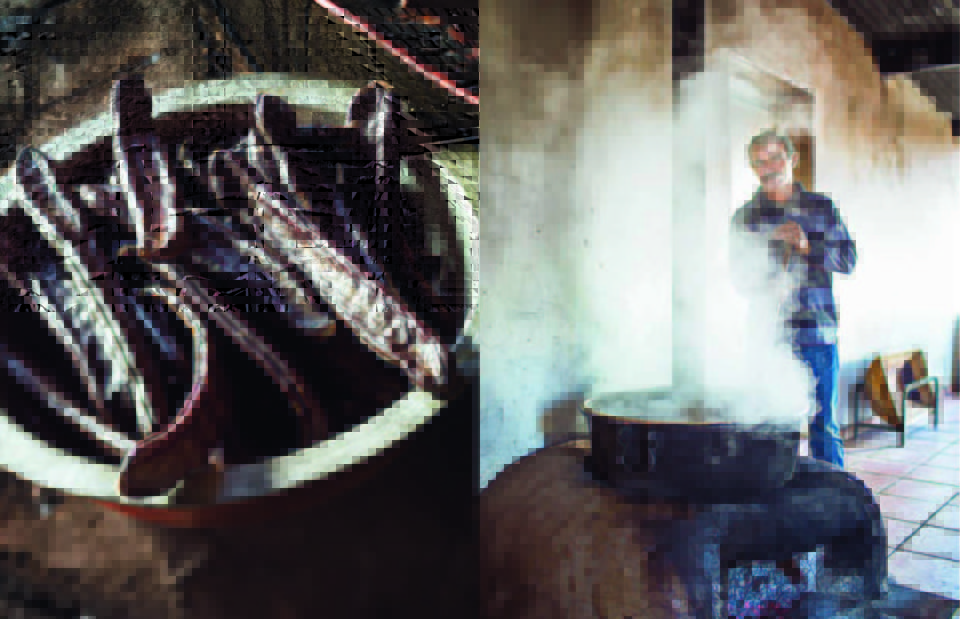 Carob hangs in black pods from the trees, but when Despoula and Andreas Michael turn it into caramel it turns a lucent golden-brown

“When the water is no longer sweet, we stop,” Despoula Michael says with a smile. With decades of experience, she doesn’t need to rely on modern technology. Despou, as the petite woman is known by friends and family, and her husband Andreas know exactly how often to pour water over the coarsely chopped, ripe carob fruit in their raised rush baskets. And subsequently, how long the collected liquid, called sherepetti, needs to be simmered over an open fire in a chartzi, or copper pot, and stirred regularly with a long wooden spoon until it thickens. And the couple don’t need a watch, measuring jug or other instruments for the intermediate steps, either – starting with the reduction to charoupomelo, or carob syrup. Everything Despoula’s mother and grandmother taught her about making pasteli is safely stored in her head.

At the age of eleven, just after finishing primary school, she began helping the adults in the family to make mavros chrysos, or ‘black gold’. “That’s what people called the carob caramel back in the Fifties, because it could be used to barter for other important foodstuffs that we didn’t have in the village.” In Anogyra, which is still surrounded by groves of carob trees, nearly every family made pasteli.

Today, Despoula and Andreas are the only ones on the whole island to produce carob ‘caramel’ in the traditional way. The golden-yellow paste – which many believe was the Biblical manna – is not really considered a basic foodstuff anymore – although it contains three times more calcium than milk and is rich in iron, magnesium, potassium, vitamin A and B and trace elements, among other things.

“Nowadays, most people eat pasteli as sweets,” Despoula tells us, although the paste tastes more malty than sweet. And the aroma that fills the air during production is more reminiscent of smoking than of boiling sugar. “Finished!” she calls suddenly, and Andreas and a second man quickly lift the heavy copper pot off the fire. They pour the gloopy, dark liquid into the skafi, a flat wooden trough. “Cooling station!” she laughs, and scratches the last dregs of the precious mass out of the pot. When the block of caramel is lukewarm, four hands heave it over a thick pole sticking twenty centimetres out of the wall. The dark-brown carob mass hangs from this pole like a skein of wool. With strength and skill, Despoula stretches out the strand of caramel over and over again, looping the end over the wood, stretching and looping, stretching and looping.

Slow Food has added pasteli to its Ark of Taste, because Cyprus is the only place left in the world where carob caramel is produced. Carob trees grow in other countries, too, but hardly anyone does anything with the fruit anymore. If anything it is eaten in its raw state, directly from the tree. Despoula’s brother harvests them with a long stick, beating at the branches until the dark pods fall down onto the prepared tarpaulin. Two sacks are already waiting in the shade next to the old pick-up truck.

Every time Despoula pulls, the pasteli strand changes colour. It is no longer dark, and lighter stripes keep emerging. Finally Despoula is holding what looks like pure gold in her hands. Now it needs to be quickly protected from the further effects of air and light, or else it will quickly turn dark again. Wrapped up in small portions, we later hold the delicious caramel in our hands. Paradosiako is the name of Despoula and Andreas’ little company. It sounds like paradise, doesn’t it? But in fact it simply means ‘traditional’. Nonetheless – pasteli tastes sublime. 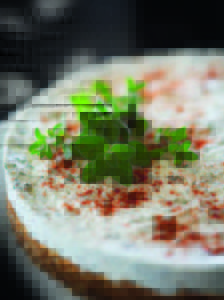 FOR THE CREAM FILLING

Mix the walnuts and paximadi, butter and a pinch of salt. Spread on the bottom of a 25-cm springform tin and press flat. Leave in the fridge while preparing the cream mixture.

For the cream, whip the anari with the yoghurt until fluffy. Fold in the capers and the fresh herbs. Spread over the walnut base and cool.

To serve, loosen the edge of the springform and allow the cake to slide off the bottom of the tin. Garnish with sprigs of herbs and leaves.

Typhoon knocks out power in S.Korea, North braces for storm