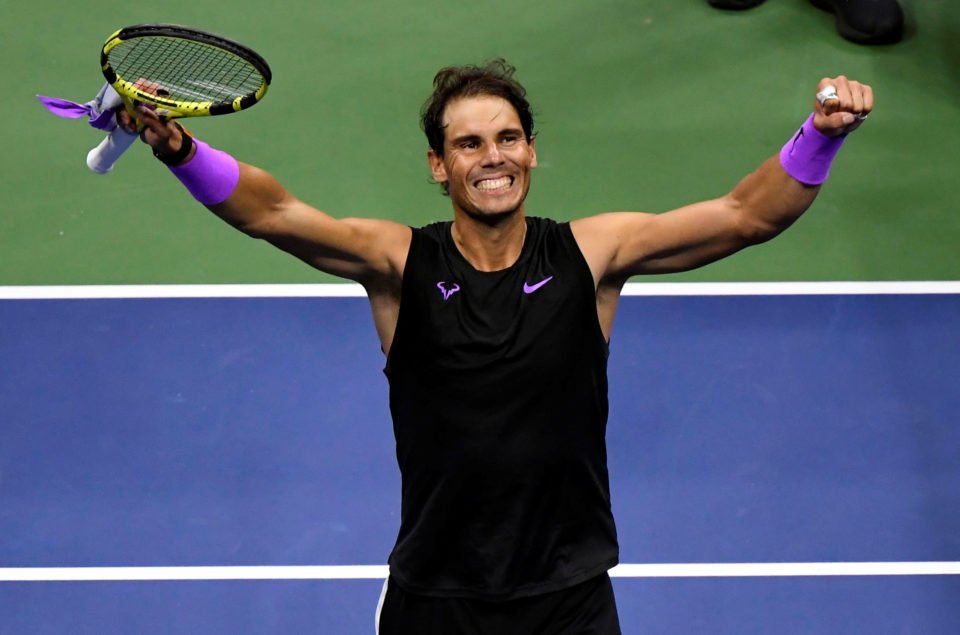 Rafael Nadal celebrates after winning the US Open semi-final.

There will be something for every age at the U.S. Open on Sunday with golden oldie Rafa Nadal looking for more U.S. Open Grand Slam glory and Daniil Medvedev poised to usher in a new era.

Nadal booked his place in a fifth U.S. Open final in familiar fashion on Saturday, out-muscling big-hitting Italian Matteo Berrettini 7-6(6) 6-4 6-1 to set up an intriguing Sunday showdown against Russian villain Medvedev, who seems to have as many weapons in his tennis arsenal as personalities.

With Roger Federer and Novak Djokovic having been shown the Flushing Meadows exit, Nadal is the last member of the Big Three still standing so it will be up to the Spaniard to extend the old guard’s run of 11 consecutive Grand Slam wins.

A fourth U.S. Open title would also give the 33-year-old Spaniard 19 Grand Slams moving him to within one of matching Federer’s record of 20.

“I just focus on trying to be 100% ready for it,” said Nadal, who will be contesting his 27th Grand Slam final. “When I arrived here, my goal was to produce a chance to compete for the big thing again. Here I am.

“You win, you lose. That’s part of all the sport.

In Medvedev, who will be appearing in his fourth consecutive final, Nadal will face the hottest player in the men’s game and perhaps one of the most complex.

The 23-year-old Russian, who admits to sometimes being unable to control his inner-demons when on court, has embraced the role of U.S. Open villain, smashing racquets and giving the crowd the middle finger.

But in a Jekyll and Hyde type switch Medvedev on Saturday turned into a soft-spoken apologist.

“I will not say that I’m a kind person or a good person, I can only say I’m a really calm person in life,” said Medvedev, who has picked up $19,000 in fines for his antics. “I actually have no idea why the demons go out when I play tennis.

“I’m not proud of what I did. I’m working to never do it again.”

As unpredictable as Medvedev can be, Nadal is a man of routine from the exact placing of water bottles to a twitchy pre-serve ritual.

Opponents and fans both know what they will get from the Spaniard each and every time he steps on court – relentless effort and refusal to surrender.

Medvedev will certainly be needing a better effort than the one he showed at the Rogers Cup final in Montreal in August when the Spaniard swept past him 6-3 6-0.

“Talking about Rafa, it’s tough to find words,” said Medvedev. “He’s one of the greatest champions in the history of our sport. He’s just a machine, a beast on the court.”