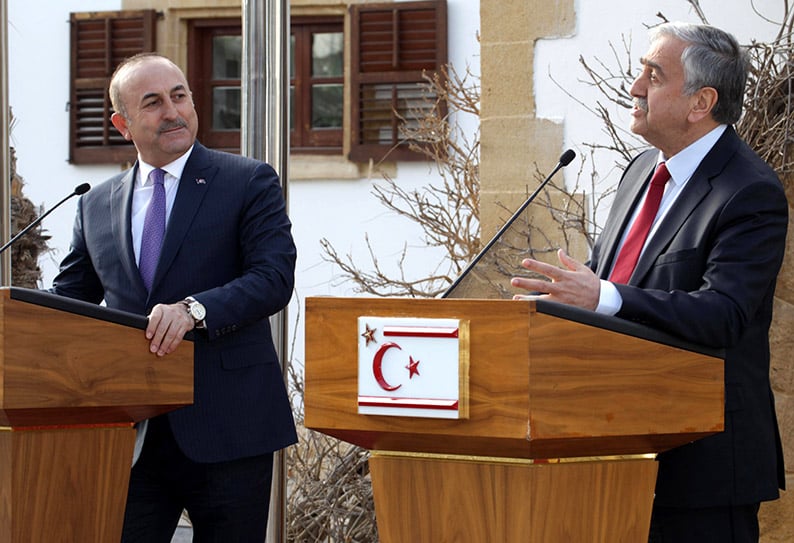 For Cyprus negotiations to resume, it must be first be clarified what it is that will be negotiated, Turkish Foreign Minister Mevlut Cavusoglu said late Sunday at the start of a visit to the north.

He also announced the opening of a Turkish consulate in Famagusta saying it would be “our 243th mission in the world”.

“No one will have the power to break the Turkish Cypriot bond with the motherland,” Cavusoglu tweeted later.

He made the announcement earlier, speaking at a gathering of Turkish settlers in Yialousa where he told an audience: “It is not possible to continue from where we left-off in Crans-Montana. It was the last negotiation we will make in this way. I had said that if there was a failure here, we would not do such negotiations again,” he added.
In order for any negotiations to resume, “political equality must be guaranteed in advance” he said.

“Are there any elements that will safeguard the rights of Turkish Cypriots? To clear these up we will begin a process where a negotiation will be focused on the outcome,” he added.

Cavusoglu’s comments come after a week when the two sides were attempting under the UN to agree on terms of reference for a resumption of talks.

A deal appeared to be close on Tuesday but following a phone call between Turkish Cypriot leader Mustafa Akinci and Ankara, an obstacle arose relating to political equality, and the terms could not be agreed in the end. Lute left the island on Saturday.

“For 60 years we have not been able to come up with a solution because the Greek Cypriot side does not want to share,” said Cavusoglu. He said President Nicos Anastasiades had told him as much, even down to sharing the same hospitals.

Anastasiades, he added, told him in Crans-Montana that the sides should look at a two-state solution “but not announce it before the [2018 presidential] elections”. This has been denied by the president.

The Turkish side needed to be honest about what it wants and say clearly what that is, and what it doesn’t want.

On the issue of gas, Cavusoglu said that despite warnings from the Turkish side, the Greek Cypriots had gone ahead with drilling “and so the Turkish side started drilling”.

“Our aim is not to quarrel with anyone, but to guarantee the right of the people.” He also referred to Akinci’s proposal for a bicommunal committee on hydrocarbons, which was rejected by the Greek Cypriots.
“I would like to issue a warning that whoever is behind you, the EU or Greece, whoever they are, no one can block our activities here, they will not be able to block them.”

Cavusoglu will have a round of contacts in the north on Monday.

Responding to the news of a consulate being opened in Famagusta, Government spokesman Prodromos Prodromou tweeted on Monday that consulates are opened on the basis of international law.

“A consulate is being established by countries who consult each other and on the basis of international law. What is a ‘consulate’ in an occupied and forcibly looted area, without the slightest recognition from any other country? A lair of illegality and a manifestation of barbarism, perhaps?”