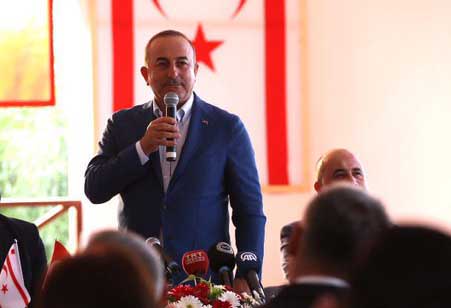 The government and main political parties on Monday condemned Ankara’s plans to open a Turkish consulate in Famagusta in the north as announced by its Foreign Minister Mevlut Cavusoglu during his visit to the island, which began on Sunday.

Cavusoglu, who was also touring the fenced-off area of Varosha on Monday afternoon, told a gathering in Yialousa, in the Karpas peninsula that it would be “our 243th mission in the world”.

“No one will have the power to break the Turkish Cypriot bond with the motherland,” Cavusoglu also tweeted later in reference to the move.

Responding, government spokesman Prodromos Prodromou tweeted on Monday morning that consulates were opened only on the basis of international law.

“A consulate is being established by countries who consult each other and on the basis of international law. What is a ‘consulate’ in an occupied and forcibly looted area, without the slightest recognition from any other country? A lair of illegality and a manifestation of barbarism, perhaps?”

The main parties also reacted. Ruling Disy leader Averof Nephytou said: “We strongly condemn Turkey’s continuing challenges in Cyprus, such as yesterday’s position of the Turkish foreign minister to open a so-called consulate in occupied Famagusta.”
“It is unacceptable but at the same time, unfortunately, Turkey’s positions are clear.”

Neophytou called for Greek Cypriot unity to meet the current Turkish challenges. These include drilling in areas earmarked by the Cyprus government for gas exploitation and plans to open Varosha for development.

At the same time, he said, the only way to face these challenges was through Cyprus negotiations.

Turkish provocations were a message “that we must all take into account in Cyprus, to find ways to become one body and to speak with one voice”.

“We need not only to condemn the actions but to coordinate, with one voice in all international fora.”
Main opposition also referred to the consulate move as a provocation.

“This is a new illegality and challenge at the expense of Cyprus and international law,” party spokesman Stefanos Stefanou said.

He said it undermined even further efforts to resume substantive negotiations.

“Akel reiterates that the two leaders must remain focused on trying to start meaningful negotiations on the agreed basis of the bizonal bicommunal federation with political equality, as set out in the relevant UN Security Council resolutions,” said Stefanou.

He spoke of the failure last week of the two sides to reach a deal on the terms of reference for new talks saying it should not have been a difficult task to accomplish, given previous convergences between the two sides.

“We reiterate that the prolonged negotiations gap coupled with Turkey’s despotism makes it easier for the occupying power to inflict new serious casualties on Cyprus and its people,” Stefanou added.

Suicide kills one person every 40 seconds, says WHO

Education ministry given until end of month to improve Larnaca school