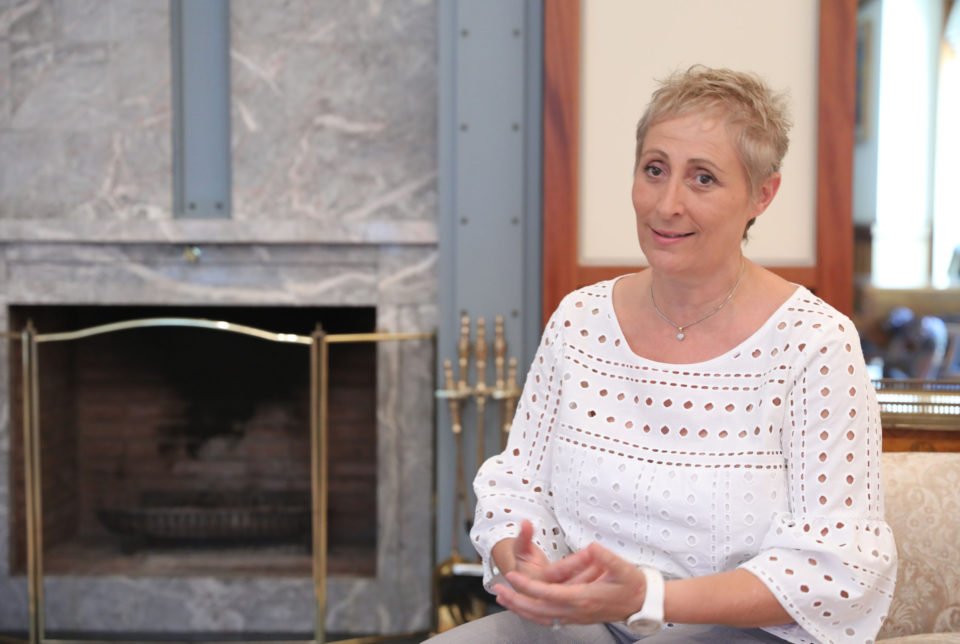 The religious leaders of Cyprus need to be heard and their proposals should be taken into consideration, Salpy Eskidjian Weiderud, Executive Director of the Religious Track on the Cyprus Peace Process  (RTCYPP) office has said.

Weiderud,, a 2019 International Religious Freedom Award recipient told CNA in an interview that religious freedom must not be a hostage of the Cyprus talks.

“Religion cannot be divided. Religious leaders should not be divided. We will always have churches and mosques at both sides of the divide.  For faith communities, these places will always be sacred.  Ignoring this reality and disrespecting the rights of religious communities will only be an obstacle to peacebuilding,” she said.

“Advancing religious freedom, the way the RTCYPP is doing it, will only help the peace process.  Most important is for the authorities to recognise the rights of faith communities to administer, to be able to visit and pray at their places of worship and to be able to care for them and even restore them,” Weiderud added.

Asked if there were further ways in which the religious leaders could tangibly contribute to the peace process, she said the religious leaders have made some historic joint statements on the missing, on violence against women, on terror attacks and had welcomed the talks to reach a comprehensive agreement for the bi-zonal, bicommunal federation.

“They entered into a discussion, they made concrete proposals but neither the faith communities, nor women’s groups or others followed up on those statements to turn them into action,” she added.

Weiderud also said that there were areas in which the religious leaders want to do more together, like on refugees, victims of trafficking and the missing.

“Together they can do more on memory, forgiveness, reconciliation and building a culture of peace, she added. She also stressed that “religious leaders can play a very significant role in truth and reconciliation processes,” she said.

Weiderud, who received the International Religious Freedom Award in Washington from US Secretary of State Mike Pompeo, said: “Peacebuilding is a quiet, slow, behind the scenes process.”

Cypriot society should see that the RTCYPP, held under the auspices of the Swedish Embassy to Cyprus, is not something to fear, it is not about promoting religion, it is about advancing religious freedom.

“People should pay attention and be proud that their religious leaders are talking together, acknowledging each other. The political authorities and civil society should support this process so that they can be able to deliver,” she added.

Ten years ago, the religious leaders of Cyprus were never brought together at the table to work together. They’d been at receptions or at events, they’d seen each other but that is not dialogue nor cooperation, Weiderud said.

Having worked with the World Council of Churches, she has not seen before such a quick readiness and positive attitude from religious leaders as she had in Cyprus when the process of the religious track kicked off.

“These religious leaders were ready. I was impressed with the way Archbishop Chrysostomos II reacted and guided the initiative, the way he met with the Mufti, the way they reacted to each other and they invited the others to join. It was like the most natural thing to do. Even though it was a quiet diplomacy, it flourished because of their commitment, giving me hope in very hopeless situations,” she added.

US Ambassador to Cyprus, Judith Garber told CNA that when the US Secretary of State Pompeo read about the work that Weiderud was doing and what was happening with the Religious Track, he decided to give one of the awards to her as the only awardee in Europe.

She said Weiderud was involved in this since the very beginning and in many ways, she was “the heart and soul” behind the Religious Track. The US was thrilled to have partners that would help advance the cause of religious freedom around the world and in Cyprus, the ambassador said.

It’s not the people, it’s the lack of enforcement

Tourism was hit the hardest by the pandemic, Cyprus Hotel Association head says

Coronavirus: Fines over failure to conform to measures