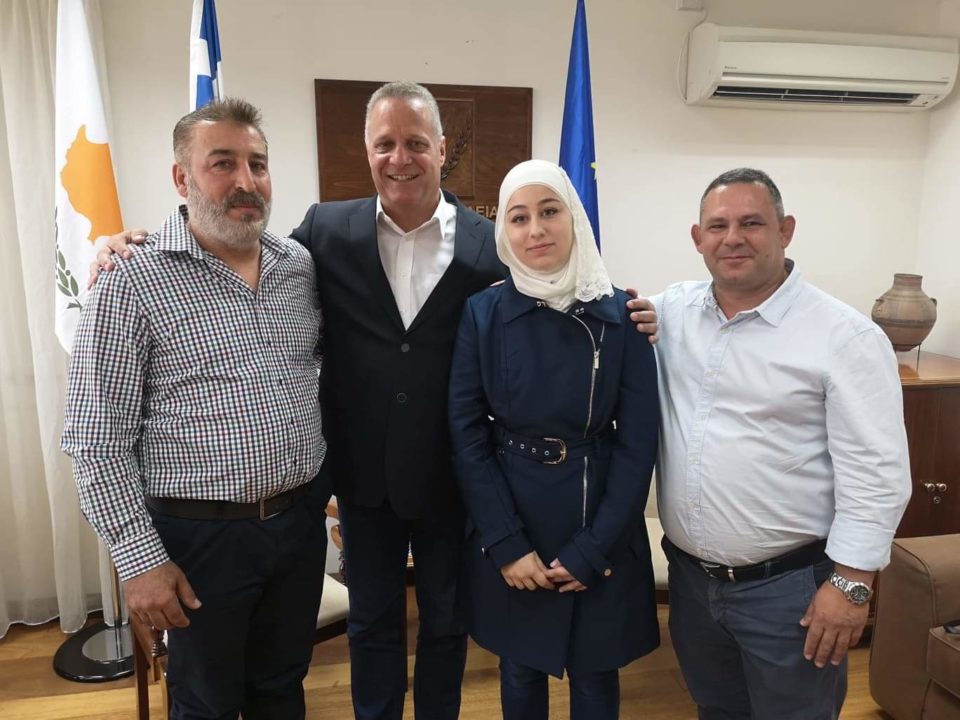 Education Minister Costas Hambiaouris with Alaa and her father (left)

Student body Psem has accused the education ministry of forgiving racist behaviours after transferring a headmaster to another school instead of punishing him for cautioning a Muslim pupil in a headscarf when schools opened last Friday.

The girl, Alaa, a Syrian refugee, was to return to school on Monday after Education Minister Costas Hambiaouris on Saturday intervened and met her with her father, and the headmaster in question

The education ministry announced on Sunday that despite the fact the headmaster, Loizos Sepos, wished to remain at the school, it was decided to transfer him to another post. The move was deemed necessary to ensure the smooth operation of the school, the ministry said.

A disciplinary probe into the matter was expected to be completed on Monday, the ministry it added.

Alaa has been living in Cyprus for the past five years. She is in her final year at the school while Sepos had just been appointed.

Sepos’ transfer has however irked Psem, which called on the ministry to punish the headmaster rather than just transfer him.

Although the transfer was considered a victory by the student movement, “unfortunately, the education ministry, with its hypocritical stance and the headmaster’s non-punishment […] it gives a free pass to racist behaviours,” it said.

Hambiaouris on Saturday, following a meeting said the issue had been resolved but the transfer came subsequently.

The issue emerged on Friday, the first day of school for secondary pupils, after a brief video taken on a mobile phone circulated on media showing a man talking to a girl in a headscarf outside the school in a stern manner while pupils jeered him.

Sepos, who had defended his action, citing school regulations stipulating that pupils must not enter the school grounds with their heads covered, said on Saturday after the meeting with the minister that he would welcome Alaa back to school on Monday, with her headscarf. He had said it was “an unfortunate incident”.

Only Greece and Turkey can break the deadlock