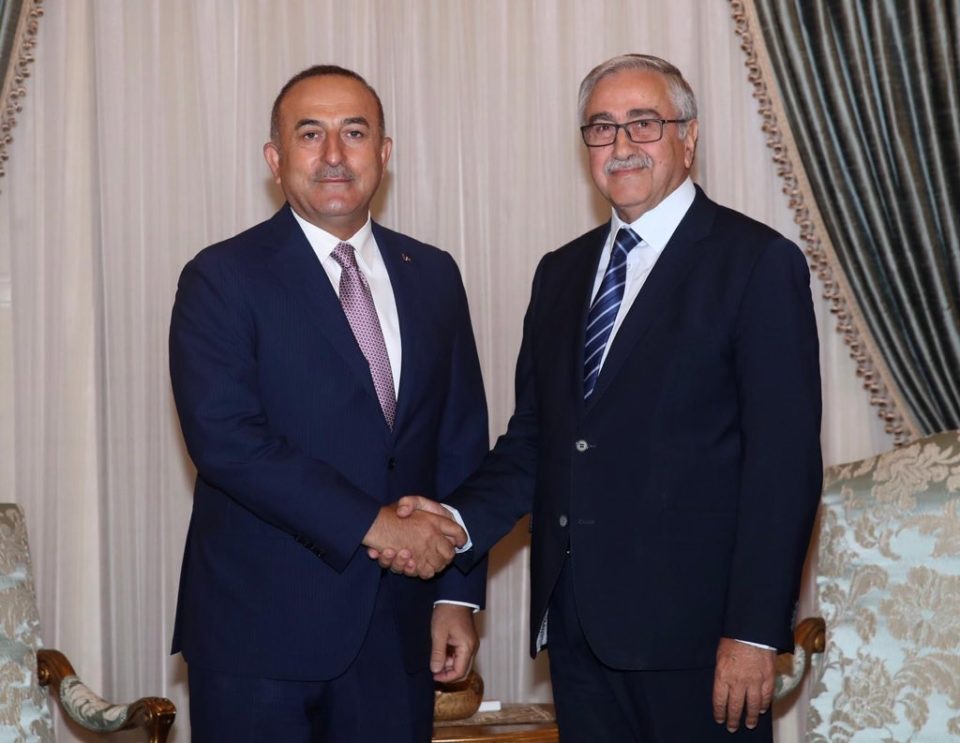 Turkish Foreign Minister Mevlut Cavusoglu stoked tensions on Monday by warning Greek Cypriots to accept a joint gas committee, insisting there would be no talks without advance Turkish Cypriot political equality, disparaging President Nicos Anastasiades, and announcing the opening of a Turkish consulate in Famagusta.

To add insult to injury, Cavusoglu also visited the fenced-off ghost town of Varosha with Turkish Cypriot ‘foreign minister’ Kudret Ozersay. No media were allowed and no statements made.

The government hit back on all fronts saying Cavusoglou’s statements earlier in the day made it clear beyond doubt that Turkey’s aim was to scupper negotiations and sow discord within the Greek Cypriot political leadership. It also called Cavusoglu’s comments about Anastasiades “offensive”.

At the start of his visit on Sunday night Cavusoglu said there had been no solution in 60 years because the Greek Cypriot side did not want to share. He said Anastasiades had told him as much, even down to not wanting to share the same hospitals with Turkish Cypriots.

Anastasiades, he added, told him during the last negotiations in Crans-Montana in 2017 that the sides should look at a two-state solution “but not announce it before the [2018 presidential] elections”. This has been denied by the president.

“We have been hearing from him [Anastasiades] or through others about a two-state solution, a loose federation or a decentralised federation and other such ideas,” Cavusoglu said during a joint news conference with Turkish Cypriot leader Mustafa Akinci on Monday. “Mr Anastasiades is skilled at saying different things to different people.”

During the news conference, he said the Greek Cypriot side should accept the proposal for a committee to jointly manage hydrocarbons “before it is too late”. Even though the Greek Cypriots had rejected it, it was still on the table, he said. If it remained rejected, Turkey would continue its drilling in and around Cyprus.

“We want to warn that no one, no matter whether the EU, Greece, or whoever backs you, cannot and will not interfere with our activities here. What you have to do here is to learn sharing,” he said.

Both he and Akinci repeated that all the Turkish side wanted was for hydrocarbons to be a source of peace in the region.

Akinci said there had been a positive response to the proposal for joint gas management from the EU and other parties. “What needs to be done here is, either, until a solution is found, all sides will stay away from such activities, or we will form the joint committee and work together, or the two sides will go their separate ways,” he said.

Both men rejected the counterproposal from the Greek Cypriot side to keep the Turkish Cypriots informed, but not consult them, on gas developments.

“Political equality is not a hollow concept,” said Akinci. “We consider that the effective participation of both parties in decisions is important.”

During the Sunday night gathering in Yialousa in the Karpas, Cavusoglu said for Cyprus negotiations to resume, it must be first be clarified what it is that will be negotiated, and that political equality for the Turkish Cypriots must be guaranteed in advance.

“It is not possible to continue from where we left off in Crans-Montana. It was the last negotiation we will make in this way. I had said that if there was failure here, we would not do such negotiations again,” he added.
“We do not rule out any solution model, and we are against imposing any kind of solution. However, the essence of the matter is for the Greek Cypriot side to accept political equality, with all its elements, in advance.”

Cavusoglu’s comments come after a week when the two sides were attempting under the UN to agree on terms of reference for a resumption of talks.

A deal appeared to be close on Tuesday but following a phone call between Turkish Cypriot leader Mustafa Akinci and Ankara, an obstacle arose relating to the political equality, and the terms could not be concluded. UN envoy Jane Holl Lute left the island on Saturday after six days of shuttle diplomacy with the two leaders.

“We followed Lute’s contacts last week and are not convinced there was a change of mentality on the Greek side when it comes to the framework of political equality,” said Cavusoglu. “The issue is the recognition of Turkish Cypriot political equality with all the elements beforehand. ‘Let the negotiations begin and we will look for it after’, not any more.”

Akinci said the terms of reference had come a long way during the week of discussions with Lute, and he believed that with patience and good intentions and a constructive spirit “with clarity and not ambiguity” there could be a framework for talks.

He said the Turkish Cypriot side had stressed to her the importance of political equality “which is a sine qua non”. “They are already a part of past agreements,” he added.

“We talked very clearly with Mrs Lute. We want to reach a conclusion now. If a process is going to start again, we want it to work,” said Akinci.

Cavusoglu also warned that a solution “with zero security and zero guarantees” could “not be imagined either”, arguing that there was a need for Turkey’s guarantees and security “now more than ever”.

Responding, government spokesman Prodromos Prodromou said Cavusoglu’s statements during the visit showed beyond a doubt that Turkey was responsible for the stagnation of the talks’ process, preventing the UN chief from relaunching negotiations.

“With his statements, Mr Mevlut Cavusoglu does not hide the fact that he manipulates the Turkish Cypriot community and at the same time he attempts to blow up the whole effort to restart the negotiations, without failing to blame the Greek Cypriot side in an absolutely unsubstantiated manner.”

He also said the claim that the Greek Cypriot side should accept in advance the unrealistic Turkish claim for political equality for the Turkish Cypriots “is the exact opposite of the political will for creative negotiations and is a blatant attempt to pre-empt talks”, he said. “Turkey certainly appears to be unprepared to engage on the basis of international law and the commonly accepted rules of international conduct.”

Prodromou also slammed Cavusoglu’s attempts “to sow discord and suspicion” within the Greek Cypriot side with his “unsubstantiated allegations”. “The Turkish side’s attempt, once again, to divert the negotiations by making it into a debate about its attempts to usurp the natural wealth of Cyprus is extremely counterproductive,” Prodromou added.

“It should also be stressed that his offensive references to the President of the Republic of Cyprus only serves to further expose Turkey,” he concluded.

Foreign Minister Nicos Christodoulides also said Cavusoglu’s statements showed who was really responsible for turning the negotiations into a non-starter. He also accused them of trying to create rifts on the Greek Cypriot side. “It is clear that Turkey does not want the talks on resolving the Cyprus issue to be resumed,” the foreign minister told CyBC. “The Cyprus government will not allow Turkey to determine the future of this country,” he added.

Three dead, one injured in shooting in Dutch home (Update 3)

Trump says as far as he is concerned, Afghanistan peace talks are dead (Updated)

Kiosk robbed for second time in a week