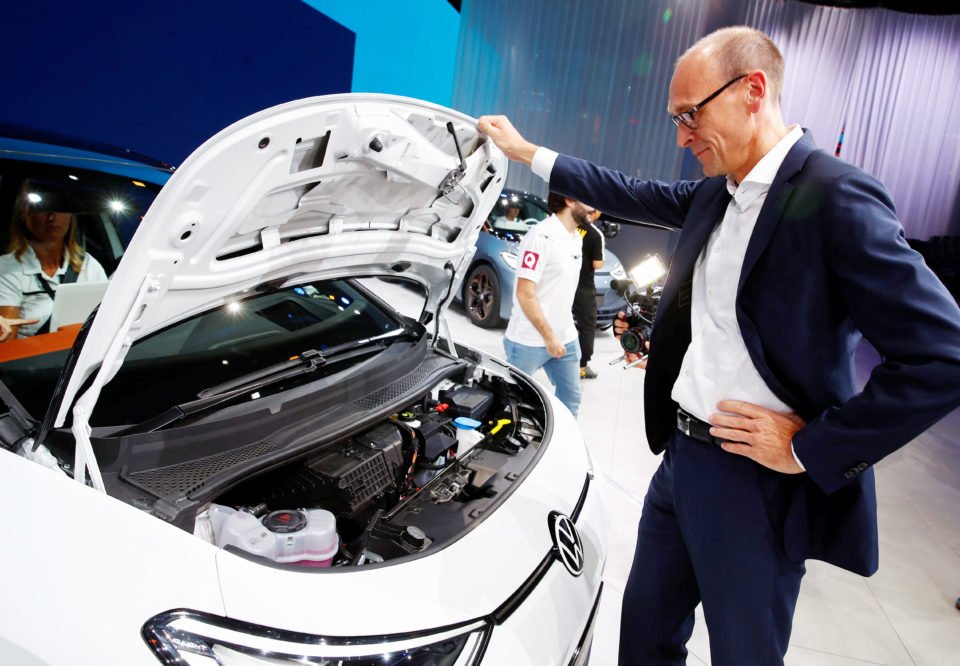 For years, image-conscious mass automakers have placed electrified models at the centre of their show stands but near the margins of their commercial offerings

Time is running out for European carmakers, which have waited until the last minute to try to meet ambitious EU emissions targets and face billions in fines if they fail to comply.

Manufacturers from PSA Group to Volkswagen are using this week’s Frankfurt auto show to reveal the new models and strategies they hope can slash carbon dioxide emissions within months.

But it is a challenge fraught with danger, as the cost of pushing pricey technology on unconvinced consumers could hammer profits in an industry already suffering a downturn in sales.

“You have cars that cost an extra 10,000 euros to build, fleet-emissions targets requiring a certain sales volume and consumers who may or may not want them,” said one PSA executive.

“All the ingredients are there for a powerful explosive.”

By next year, CO2 must be cut to 95 grammes per kilometre for 95% of cars from the current 120.5g average – a figure that has risen of late as consumers spurn fuel-efficient diesels and embrace SUVs. All new cars in the EU must be compliant in 2021.

The timing could hardly be worse, with the main auto markets in decline and the sector braced for a chaotic UK exit from the European Union and a lengthy U.S-China trade war.

The industry has long since given up pushing for the goals to be relaxed – a political impossibility underlined by a resurgent climate protest movement that has added the Frankfurt show to its target list. Greenpeace inflated a large, black “CO2” balloon outside a main entrance on Tuesday.

New electric cars wheeled out at the show include PSA Group’s Opel Corsa-e mini and the ID.3 compact from Volkswagen. The German carmaker is also making hybrid power standard-issue in its Golf bestseller.

Fiat Chrysler, which lacks adequate green technology, has agreed to pay Tesla hundreds of millions of euros to pool emissions scores with its electric cars and escape penalties.

For years, image-conscious mass automakers have placed electrified models at the centre of their show stands but near the margins of their commercial offerings. Only now will they be forced to sell them in large numbers, challenging profitability.

Sales of electric cars will need to triple to 6% of the market by 2021 and rechargeable hybrids surge fivefold to a 5% market share, German engineering firm FEV Consulting estimates.

While Mercedes has “all the right vehicles on offer to reach those targets”, Daimler boss Ola Kaellenius said on Tuesday, “we cannot mandate what the customer buys.”

“It’s going to require the industry to force quite a lot of cars into the market,” Warburton predicted, with carmakers leaning on discounted sales to fleets and their own employees.

Rather than incur fines that could total 25 billion euros in 2021 if current lineups were left unchanged, carmakers are engaged in a huge product overhaul likely to wipe more than half that amount from combined profits, Bernstein projects.

Ford said on Tuesday it would launch eight electric vehicles in Europe this year.

Many electrified offerings are arriving just in time – or in many cases too late – for deliveries to begin in January, when less efficient models will also become more scarce.

Hard on the heels of VW’s electric ID.3, the Golf 8 to be unveiled next month heralds a mass deployment of 48-volt hybrid technology at the very heart of Europe’s auto market.

French carmakers face a bigger hit to margins than German rivals, analysts say, because they lack significant U.S. and Chinese earnings to soften the blow.

Renault, reliant on its ageing Zoe electric car, is rushing to add hybrid versions of its Clio and Captur subcompacts now expected in the second quarter of 2020.

PSA is counting on pricier plug-ins and electric versions of its DS3, Peugeot 208 and Opel Corsa to claim 7% of its total sales. It has also scrapped less-efficient Opel models and will halt sportier versions including the Peugeot 208 GTi and 308 GT.

Some of PSA’s rivals will struggle to survive the next decade of carbon regulation, CEO Carlos Tavares said on Tuesday. “I’d be surprised if we didn’t see a few bankruptcies, considering the amplitude of the coming change.”

The cull of less efficient models and engines is being replicated across the sector, threatening automotive jobs already squeezed by the shift to electrification.

The head of German auto supplier Continental appealed on Tuesday for state aid to defend jobs, investment and innovation that he said were endangered by CO2 penalties.

“The time to relieve the burden on industry and consumers is now,” Chief Executive Elmar Degenhardt told reporters.