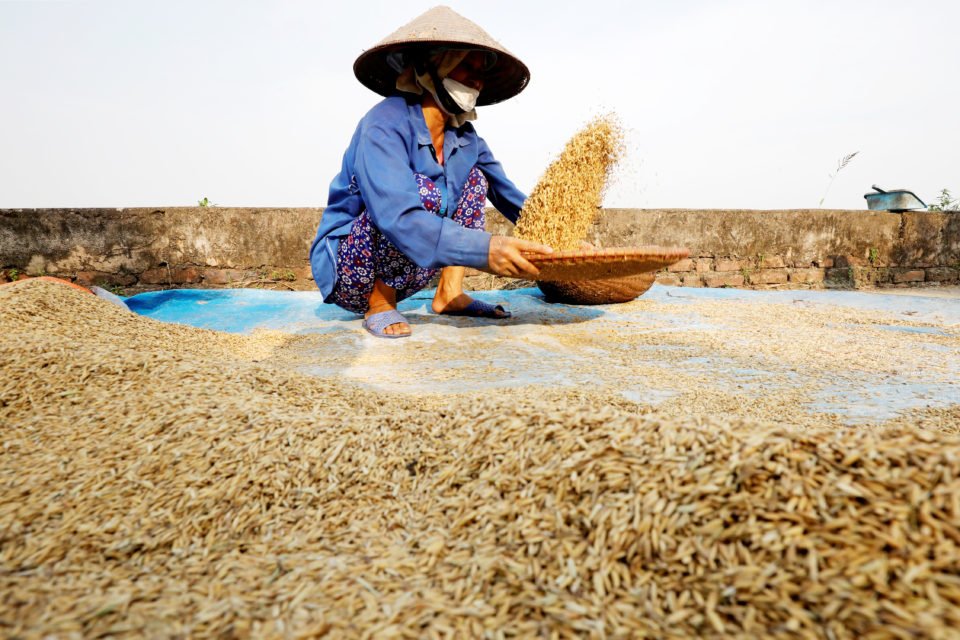 A farmer harvests rice by a paddy field outside Hanoi, Vietnam

As they look to curb climate changing emissions, some of the most rapid transitions to renewable energy are taking place in countries such as China, India and across Southeast Asia.

But with many in the region still dependent on farming and fishing, there is a real risk that large-scale renewable energy projects will change land use and hurt poor communities, said Harjeet Singh, global climate change lead at charity ActionAid.

“This shift and expansion will have significant implications for farmers, indigenous communities, ecosystems and water sources. The risks include land grabbing, destruction of forests and water bodies, and displacement,” he said.

“There is a need to ensure that the new solutions don’t create different injustices, inequalities, and cause more environmental destruction”, including from mining for minerals such as copper, cobalt, lithium and rare earth metals, he said.

More than three people were murdered each week last year while protecting their land from encroaching industries, with a four-fold increase in killings related to conflicts over water, according to Britain-based human rights group Global Witness.

Of the 164 killings it recorded in 19 countries, nearly a fourth were linked to mining, with fatal attacks also recorded at hydropower projects, it said in July.

In the Mekong river, some 11 mainstream dams and 120 dams on tributaries are planned for hydropower generation, which scientists have warned will imperil the already fragile river system, and hurt communities dependent on fishing and farming.

India’s development plans, requiring 11 million hectares of land by 2030, are likely to cause displacement “on an unprecedented scale,” the Geneva-based Internal Displacement Monitoring Centre said in a 2016 report.

Some of this land will go towards large solar farms that are key to meeting India’s commitment to increasing its electricity generation from renewable sources to 40% by 2030.

Rooftop solar panels are one option, said Vibhuti Garg, an analyst at the Institute for Energy Economics and Financial Analysis in India.

“The government is also looking for land that is not used for agriculture,” she said.

Countries including Thailand and Singapore are also floating solar panels in lakes, dams and the sea.

While croplands have the greatest solar power potential, the impact can be minimised with “agrivoltaic” systems, or growing crops underneath solar panels, according to a study published in the journal Nature last month.

“The answer is a ‘just’ renewables energy transition to avoid replicating the deep injustices and environmental damage that have been widely witnessed in the fossil-fuel sector.”

Students in international IT competition do Cyprus proud