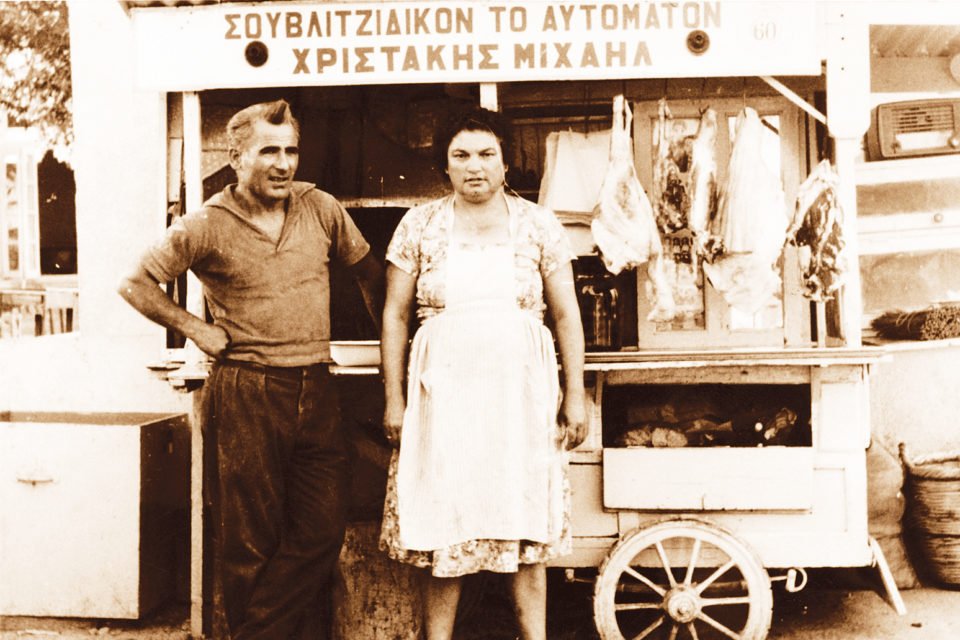 “Come my little birds to the fountain! He who is a connoisseur shall elect to eat!” was the catchphrase of souvlitzi seller Christakis Micheal who plied his trade from a cart known as The Automaton on Gladstonos street in Limassol during the 1950s.

“Of the good pastellaki, I alone am the seller. It is full of kounna and athasi, he who won’t try it will miss out!” once cried the market vendor in Ermou, Nicosia.

“Patellin from Anogyra, I collect glass bottles,” was the call of one well-known pedlar of sweets, who accepted payment in both bottles and coins well into the latter half of the last century.

Even today, we hear similar cries emanating from strawberry-laden pick-ups and tiropita carts, from Saturday morning markets and festival pop-up stalls. Because, in Cyprus, street food has always been – and continues to be – an integral part of our existence. And yet, until now, there was almost no information on the subject – no research into who ate what and when, no curated data on vendors or stalls or unusual fare. But that’s all changed with Cyprus Street Food – From the Past to the Present, a riveting glimpse into the history of our culture’s itinerant snack providers…

“During the course of the 20th century, certain street foods have completely died out,” says Petroula Hadjittofi, researcher and author of this marvellous glimpse into the island’s culinary history. “Drinks such as sherbet or salep have altogether disappeared from the diet of the Greek Cypriots, while sweets such as mahallepi, although still commonly enjoyed at home, are no longer consumed in the street. Other types of food are becoming scarcer, perhaps due to the more general shift in our dietary habits… 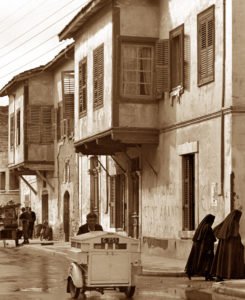 “We can, however, still find certain types of traditional Cypriot fare on the street – including pastries, koupes, loukoumades, and pompes – as well as foods that were introduced in the course of the 20th century, such as cotton candy, popcorn and sandwiches. And, during the past few years, the variety of street foods has been significantly enriched by new types of fast foods from foreign cuisines, offered by permanent establishments or even stalls at street food markets which have assumed a prominent role in providing street foods.”

Over the course of the past four years Petroula has become the island’s resident expert on the island’s street food – both past and present. She’s interviewed any number of venerable vendors (including one Mr Kadir Kaba, who “shared his very vivid memories of street food, providing valuable information on particular foods and drinks that were common among the Turkish Cypriots before 1974”); trawled the archives of local newspapers, and pored over countless research papers and websites.

“Street food in Cyprus was an interesting yet challenging research topic to tackle,” she reveals. “There was no literature on the subject, and a huge number of different aspects to be studied and documented. Collecting and combining information from various types of primary and secondary sources was a long and difficult process, and it was a challenge to portray a comprehensive picture of the subject while still highlighting particular sub-topics that seemed important. Especially difficult,” she notes, “was tracing the history of street food back in the late 19th century. Information from newspapers and travellers’ accounts shed some light on the history of specific categories and types of foods, namely pastries and ice-cream. But I’m always hopeful that new evidence will come to light in the future!”

Although Petroula makes it sound as if the Cyprus Street Food is only the start of a lengthy process, to the layperson the book (with its alternate pages in Greek and English) appears wholly comprehensive. Baked goods and pastries, dairy and eggs, meat dishes, fruit, nuts, sweets and beverages all merit riveting entries. There are notes on the type of vendors – “street food selling was an endeavour predominantly associated with males” – and regional varieties, and we delve into the specialities of the island’s various ethnic groups…

“Turkish Cypriots often traded nuts (mandoles, or candied almonds; sometimes salty, at others made with kaesi from the apricot tree), ayran, rice puddings and other dairy products, as well as certain types of dishes and drinks including the kahvalti, kabak tatlisi, and sharbat. Greek Cypriots sold mostly pastries, koupes, ice cream, and mahallepi. The Armenian community were celebrated as makers of lahmajoun and pastourma. And those sellers who migrated to Cyprus from Asia Minor and Constantinople are reported to have focused on ice cream and sumptuous candy.”

“‘Poverty being the mother of invention’”, Petroula notes, “urban vendors were mostly unskilled men who had lost or left their previous employment, or simply sought ways to improve family income.” In rural areas, however, the trade was a little different. “In the countryside, one could find those who had retired or were unemployed selling food as a part-time occupation, alongside rather odd professional combinations…” Such as, in the case of the notable Demetris Satrakis from the village of Lysi, both ‘ice cream seller and farmer’!

There’s a true wealth of detail to Street Food: a book which conjures up our rich culinary past. Magnificent photos on every page are a testament both to Petroula’s exhaustive research and a public competition that invited all and sundry to submit their photographs related to street food. And, should the gastronomic temptations within whet the appetite, there’s even an absorbing Appendix of current street-side establishments. But it’s the past that most intrigues here: the snapshot of a bygone era when everything from rose water to prickly pears came on a cart. And with a cry…

Street Food, From the Past to the Present

In both Greek and English, the book is a project of the Cyprus Food and Nutrition Museum. Available from all good bookshops and various local museums at a cost of €25. For more information, contact the Food Museum on 99 295150 or visit http://foodmuseum.cs.ucy.ac.cy