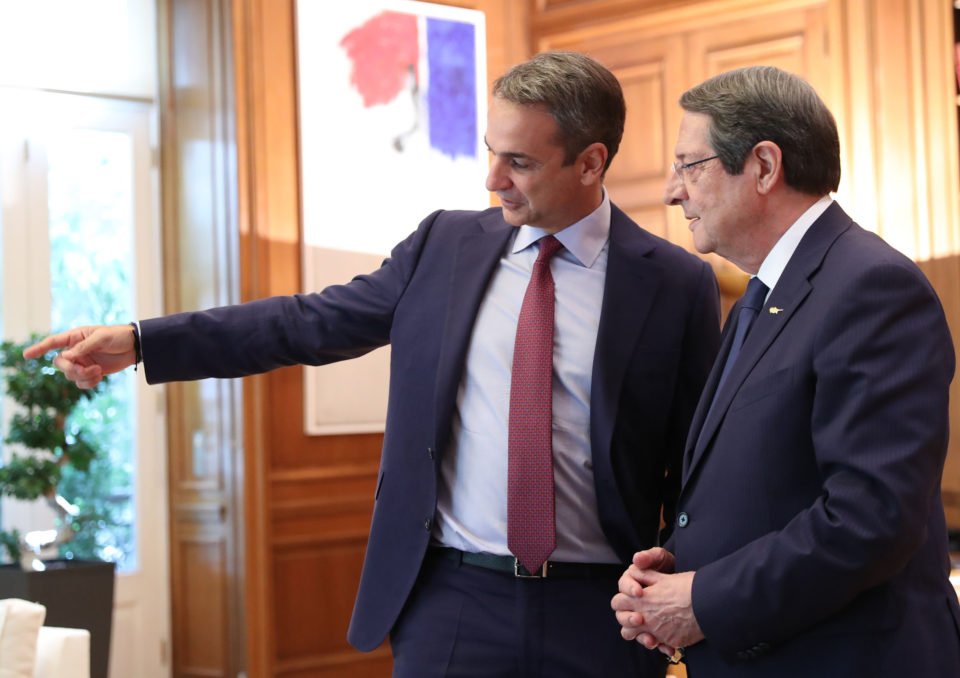 Cyprus and Greece on Tuesday agreed on a joint course of action to deal with illegal activities by Turkey in the island’s exclusive economic zone, and plans to open the fenced-off area of Varosha to development.

According to a joint statement following their meeting in Athens, President Nicos Anastasiades and Greek Prime Minister Kyriakos Mitsotakis expressed the common position that Turkey should end these actions and contribute to the creation of a suitable climate for Cyprus talks.

Both also expressed their willingness to work with the UN “to relaunch substantive negotiations on the overall settlement of the Cyprus issue.”

They also referred to the “extreme intransigence” shown by Turkish Foreign Minister Mevlut Cavusoglu during his visit to the north of the island on Monday.

Cavusoglu stoked tensions by warning Greek Cypriots to accept a joint gas committee, insisting there would be no talks without advance Turkish Cypriot political equality, disparaging President Nicos Anastasiades, and announcing the opening of a Turkish consulate in Famagusta.

On Anastasiades’ arrival in Athens, Mitsotakis said Greece remained steadfast in its efforts to resolve the Cyprus problem and was standing by Cyprus in defence of its rights.
Mitsotakis said the visit was also symbolic as Anastasiades was the first head of state he had received at the Mansion.

“We are at a sensitive turning point in the Cyprus issue,” said Mitsotakis ahead of his briefing from Anastasiades on the recent contacts he had with UN envoy Jane Holl Lute who was in Cyprus last week for six days of discussions on resuming the Cyprus talks. The discussions, however, failed to come up with a basis, the so-called terms of reference, for new negotiations.

“Our concern is to end the occupation and the unacceptable status of guarantees,” Mitsotakis said, adding that the obstacles set by the Turkish side did not help secure progress.

Greece remains firm in its efforts to resolve the Cyprus problem and stands by Cyprus in defence of its rights, he added.  He also said Turkey’s stance violates the interests of the European Union and this must be understood.

Anastasiades thanked Mitsotakis for Greece’s positions and for supporting the need to finally find a solution to the Cyprus problem.

Turkey, he said, wants to control the Turkish Cypriot community even after the Cyprus settlement. “We have taken steps, we have created conditions for the terms of reference,” he said, adding, however, that Monday’s statement by the Turkish foreign minister raise concerns about Ankara’s intentions

After leaving Cyprus, Cavusoglu, in statements at a news conference in Ankara with his counterpart from Montenegro, was quoted on Tuesday repeating what he had said in Cyprus.

“Political equality, effective participation and a rotating presidency are red lines for Turkey and the Turkish Cypriots,” he said. These should be formulated prior to restarting talks.

“The negotiations here and now need to be focused on the outcome and with a clear framework. We can no longer afford a new failure.”

His comments have been widely condemned on the Greek Cypriot side.

“At the same time, we welcome the fact that forces within the Turkish Cypriot community resist the policies and rhetoric of Mr Cavusoglu and condemn his colonialist views,” he said, Stefanou was referring to an announcement from the Turkish Cypriot Trade Union Platform on Tuesday calling Cavusoglu a “colonial-era” minister, spouting “racist and anti-solution” statements. It called on political parties that remain silent to “oppose colonialists” and take up their responsibilities.