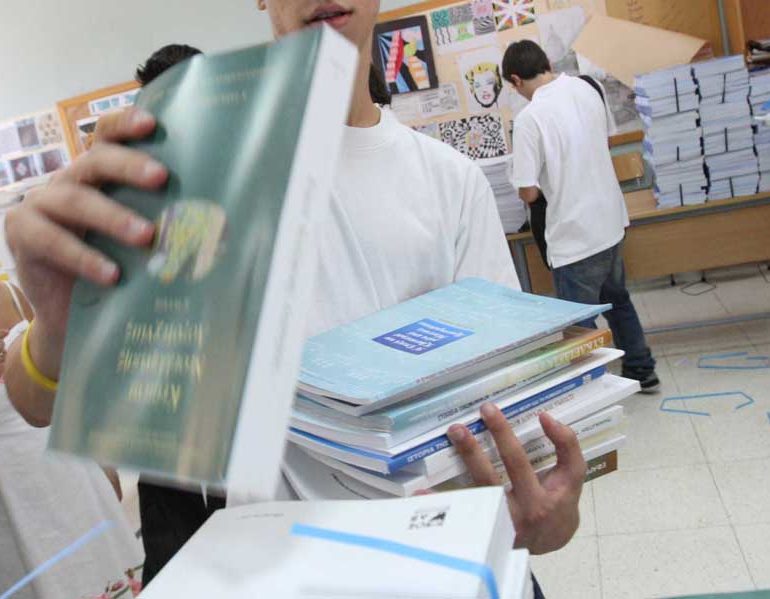 A mobile library `wanders` the yard of Fifth Primary School in Aglandjia in Nicosia, building environmental awareness through the recycling and reuse of books.

The school is among a few in the Nicosia district that promotes organised actions for the recycling and reuse of books, textbooks and others.

The action is being implemented with the support of the Cyprus Pedagogical Institute and Aravella Zachariou, the Coordinator of the Unit of Education for Environment and Sustainable Development (ESD) with the approval of the education ministry.

It began two and a half years ago when Ismini Pafiti, a member of the Parents Association, realised that there was no organised plan for used textbooks and other books. She briefed the other parents and they decided to promote do something, and the ‘Recycling and Reuse of School and Other Books’ was born.

“Initially our goal was to collect used textbooks and notebooks and hand them over to a paper recycling company. We got in touch with a few companies and came to an agreement. Along the way, the action gained a broader approach, we collect all kinds of books and decide what to do with them. The action of course is carried out in collaboration with the school and has been incorporated into its Sustainable Environmental Policy,” Pafitis told Cyprus News Agency.

A large number of books has already been collected and around 100 kilos was already given to the recycling company. The agreement provides that for every tonne of books the school will be given back an amount of money to be used for environmental awareness events.

The teachers responsible for the sustainable environmental policy go through books and decide which ones will be given for recycling, which ones can be used again next year by students and which books can be placed at the library.

Parents and students can bring books to school at any time and announcements are made frequently to remind all about the action.

“The purpose is to collect school and other textbooks on a permanent basis and to use them appropriately, to build environmental awareness in school children and their parents and to introduce appreciation and love for books in general. The goal is for this action to become a permanent one for our school and to be spread out in the community and other schools across the country so that all Parents` Associations in collaboration with teachers can use tons of school and other textbooks to their benefit and to the benefit of the environment”, she said.

She also said that the Parents’ Association got in touch with Aglandjia municipality and the mayor and they hope that they could find a way of cooperation for the benefit of the community.

Pafitis also says that students have embraced the initiative and were enthusiastic.

She also notes that recycling of school uniforms was something that was discussed among the parents in the past and although some parents collect uniforms, it’s not done in an organised way. “This is definitely a good idea to implement and we will look into it in detail”, she said.