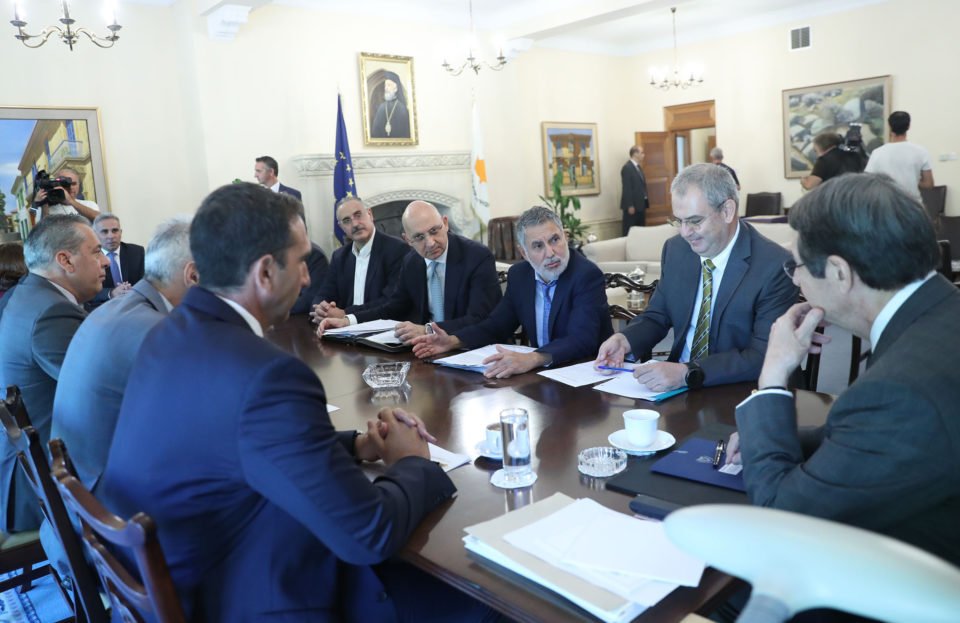 Doctors at the presidential palace on Thursday

The Cyprus Medical Association (CyMA) and private hospitals are to enter consultations with the Health Insurance Organisation (HIO) for the improvement of Gesy, Health Minister Constantinos Ioannou announced on Thursday.

The minister made clear however that any improvements made would be based on existing legislation and not involve law changes.

On Thursday CyMA representatives and those from the private hospitals association (Pasin) had a meeting with President Nicos Anastasiades in the presence of the health minister.

Following the meeting, it was announced that the private doctors and hospitals would start consultations with the HIO for improvement of the national health scheme ahead of the introduction of Gesy’s second phase – inpatient care – which will come into effect in June 2020.

Though it was not explicitly said, it is understood the dialogue is aimed at bringing CyMA and Pasin on board as regards participation of their members in Gesy since both have been sceptical it would succeed and have on several occasions voiced their opposition to the scheme as is.

“The HIO has been asking for this dialogue and I am glad for this change of attitude by the doctors’ leaderships,” Ioannou said.

But the input by CyMA and Pasin would further improve Gesy, the minister said.

He stressed that any changes or improvements would have to be in line with the existing legislation. This reminder comes after past demands by CyMA for an increase in the Gesy budget among other things.

Head of CyMA, Petros Agathangelou, expressed optimism about the outcome of the dialogue.

He said they want to ensure that Gesy’s patient-centric character will be safeguarded and that there will be free choice of doctors and hospitals so that patients will be able to receive service promptly.

According to Agathangelou the president listened very carefully to what they had to say on basic points and issues concerning Gesy’s fundamental principles.

“I believe that through this dialogue which will be structured, substantive and specific those convergences will be reached we all wish for,” Agathangelou said.

The head of Pasin, Savvas Kadis, also expressed his satisfaction with the meeting and hoped the dialogue would be a fruitful one.

“We are in favour of a comprehensive health scheme based on solidarity and we set as a priority, the basic principle of the scheme which is free choice of doctors and hospitals for patients,” he said.

He added that they submitted their concerns and made clear that a solution ought to include both doctors and hospitals.  “These two are interchangeably linked and cannot be separated,” Kadis said.