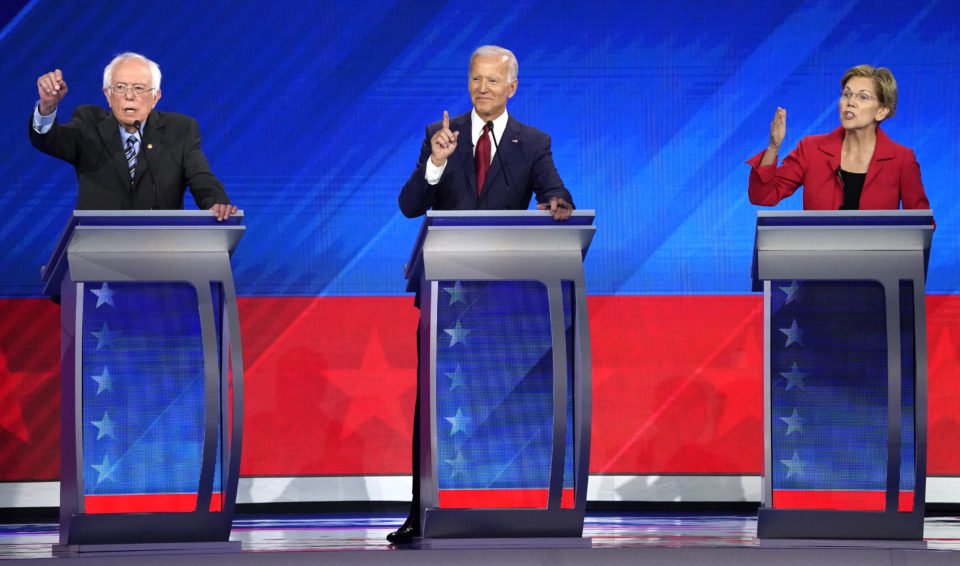 Former Vice President Joe Biden and US Senators Elizabeth Warren and Senator Bernie Sanders – the leading contenders for the 2020 Democratic presidential nomination – wasted no time in Thursday’s debate sparring over how to best expand healthcare coverage for Americans.

The divide among the candidates over the proposal known as Medicare for All, which would cover every American under a government health plan and essentially eliminate private insurance, was again laid bare in the opening moments of the Democratic Party’s third presidential debate in Houston.

But after some sharp exchanges, several of the White House hopefuls warned that too much acrimony would distract them from the ultimate goal: defeating Republican President Donald Trump in November 2020.

After another wave of mass shootings, the candidates all agreed on increasing restrictions on firearms to address gun violence, the latest sign that Democrats have made gun control a top priority for the first time in a generation.

Here are some highlights from the debate, which featured the top 10 Democrats from a field of 20 seeking the nomination:

The first question of the night went to Biden, asking him whether liberals like Warren and Sanders had gone too far left for mainstream Democrats.

Biden quickly pivoted to healthcare, challenging Sanders of Vermont and Warren of Massachusetts to explain how they plan to pay for what some analysts expect would be a $30 trillion Medicare for All plan.

“Thus far, my distinguished friend, the senator on my left, has not said how she’s going to pay for it,” said Biden, referring to Warren.

Both Warren and Sanders were careful to avoid saying explicitly that middle-class families would see higher taxes, instead emphasizing that they would save money overall by eliminating medical costs.

Sanders acknowledged the cost of his signature plan – but said studies show the status quo will cost Americans $50 trillion over the same time period.

“I wrote the damn bill, if I may say so,” he said, repeating his main applause line from the second debate in July.

Biden emphasised that his plan would allow people who like their private insurance to keep it, a key point of distinction from Sanders’ and Warren’s approach.

“Let’s be clear – I’ve actually never met anybody who likes their health insurance company,” Warren replied. “I’ve met people who like their doctors.”

When Sanders noted Americans spend far more per capita on healthcare than Canadians, Biden interrupted, saying, “This is America.”

“Americans don’t want to pay twice as much as other countries,” Sanders shot back.

MEDICARE FOR ALL: A BOLD IDEA OR A BAD IDEA?

Other candidates seeking to make their mark on the stage also took aim at Sanders’ Medicare for All plan.

US Senator Amy Klobuchar of Minnesota, who has run as a moderate, said Sanders’ proposal would force millions of people off their insurance plans.

South Bend, Indiana, Mayor Pete Buttigieg sought to contrast his proposal to offer a government plan as an alternative, which he describes as “Medicare for all who want it,” with Sanders’ more sweeping reform.

“The problem is that it doesn’t trust the American people,” he said of the senator’s plan. “I trust you to choose what makes the most sense for you.”

US Senator Kamala Harris of California, who has released her own Medicare for All plan, redirected the conversation toward Trump. She noted that the current administration has sought to strike down the entire Affordable Care Act, commonly known as Obamacare, in federal court.

“I think this discussion has given the American people a headache,” she said. “What they want to know is that they’re going to have healthcare and the cost.”

Following the heated discussion about healthcare in the first 40 minutes of the debate, several candidates stressed the importance of standing together as Democrats, saying fighting one another would play into Trump’s hands.

Moments after former US Housing Secretary Julian Castro, 44, of Texas accused Biden, 76, of forgetting what he had just said two minutes earlier – a comment seemingly aimed at Biden’s age that many in the audience jeered – Buttigieg called for civility.

“This is why presidential debates are becoming unwatchable,” Buttigieg said. “This reminds everybody of what they cannot stand about Washington. Scoring points against each other, poking at each other.”

Castro was unbowed. “That’s called an election. This is what we’re here for, it’s an election.”

“A house divided cannot stand,” said Klobuchar, quoting Civil War-era President Abraham Lincoln. “And that is not how we’re going to win this.

That sentiment was echoed by US Senator Cory Booker of New Jersey, who said while they had differences on how to pay for and deliver healthcare, every person on stage believed in universal care.

“We cannot sacrifice progress on the altar of purity,” he said.

Beto O’Rourke, the former congressman from El Paso whose hometown was the site of a racially motivated mass shooting that killed 22 people last month, minced no words when asked whether he was proposing confiscating assault-style rifles.

“Hell, yes, we’re going to take your AR-15, your AK-47,” he said in a moment that instantly went viral, describing those guns as weapons that belong on the battlefield, not in America.

In a sign of just how much the Democratic Party has shifted on gun control, the ensuing discussion focused on ideas once seen as political dynamite: gun buybacks, assault weapon bans and licensing requirements.

Booker, who has proposed a national licensing system, said he has seen the impact of everyday gun violence in Newark, where he lives in a largely minority and low-income community and where he was mayor.

“These mass shootings are tragedies, but the majority of the homicide victims come from neighbourhoods like mine,” he said.

Both Warren and Sanders blamed corruption and a Congress beholden to the gun industry for failing to pass meaningful gun reform like universal background checks. Biden touted his work in passing the original assault weapons ban decades ago, despite opposition from the National Rifle Association.

And Harris repeated her contention that Trump’s divisive rhetoric had inspired the El Paso shooter, who apparently wrote an anti-immigrant screed before the attack.

“Obviously he didn’t pull the trigger, but he’s certainly been tweeting out the ammunition,” she said of Trump.

During the first two debates, some candidates questioned former President Barack Obama’s failure to include a public option as part of the Affordable Care Act and his mass deportations of illegal immigrants as a way of attacking Biden, Obama’s vice president for eight years.

At Thursday’s debate, however, candidates went out of their way to praise Obama, who remains the party’s most popular figure.

“I want to credit President Obama for bringing us this far,” Harris said of Obama’s signature healthcare law. Castro said America “owed a debt of gratitude” to Obama for the Affordable Care Act, commonly known as Obamacare.

And Warren, who wants to scrap Obamacare, nevertheless praised the former president for the advances he made in providing health insurance to millions more Americans.

But Castro would later go after Biden for distancing himself from the Obama administration’s deportation policy, accusing the former vice president of cherry-picking parts of Obama’s record when it suits him.

Given the chance to respond, Biden said: “I stand with Barack Obama all eight years, good, bad and indifferent.”

Andrew Yang, the entrepreneur whose campaign is centered on a proposal to give every American a universal basic income of $1,000 a month, announced at the debate’s outset that he was ready to put his plan to the test.

“It’s time to trust ourselves more than our politicians,” he said in his opening statement. “That’s why I’m going to do something unprecedented tonight: My campaign will now give a ‘freedom dividend’ of $1,000 a month for an entire year to 10 American families, someone watching this at home right now.”

The unorthodox gambit left Klobuchar dissolving into admiring laughter, while Buttigieg started his own remarks by saying, “It’s original, I’ll give you that.”