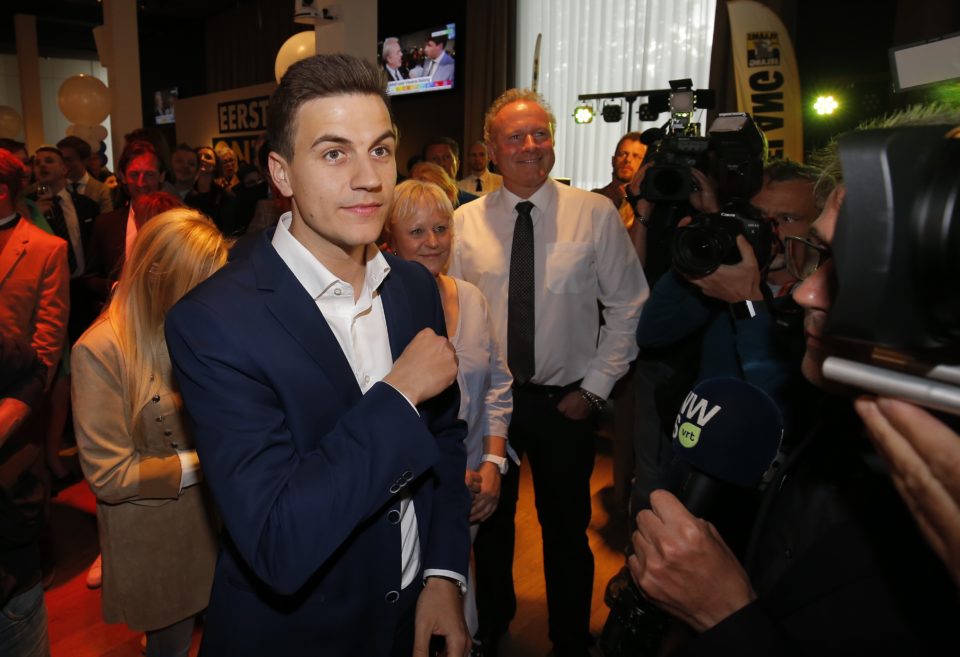 epa07603450 Schild en Vrienden founder and independant candidate on the Vlaams Belang list Dries Van Langenhove arrives at the Vlaams Belang Party in Londerzeel, Belgium, 26 May 2019. The European Parliament election is held by member countries of the European Union (EU) from 23 to 26 May 2019. Belgians also vote for National and Regional elections. EPA-EFE/JULIEN WARNAND

Last week, as Europe commemorated the eightieth anniversary of the outbreak of World War Two, the far-right Alternative for Germany became the most popular choice for young voters in the east German state of Saxony.

Along with a strong performance in local elections the same day in Brandenburg, the results were a reminder of just how dramatically far right political parties have resurrected themselves in modern Europe. Trading off economic frustration and disquiet over migration, they are weaponising technology and social media, international networks and widespread frustration with the political status quo.

Such parties do not necessarily need outright power to achieve their goals – as shown by Italian right-winger Matteo Salvini when he became interior minister, turning away migrant rescue ships and arresting one of the captains.

Italy’s example, however, also points to the challenges faced by such groups. After bringing down the government earlier this year, Salvini was widely expected to become prime minister. Instead, he has found himself kept out by an alliance of more moderate parties.

The lesson of the thirties, however – another era of dislocation, change and paranoia – remains stark. Adolf Hitler’s Nazis never won more than a third of the votes in a democratic election, but that was enough to give them a stranglehold on power, given the proportional representation-based German constitution.

Some far-right leaders continue to be plagued by scandal and ineptitude. Austria’s Freedom Party was forced from government in May after its leader, Heinz-Christian Strache, was filmed in a video sting known as the Ibiza tapes, promising government contracts to a woman he believed to be a Russian oligarch’s niece. Nevertheless, the party looks set for a strong showing in the resulting Sept. 29 election.

Le Pen – whose father founded the party in 1972 and lost a presidential runoff against Jacques Chirac 30 years later – remains firmly in control, with another chance of seizing the Elysée Palace at the next opportunity in 2022.

“The point is that they are going mainstream,” says Julia Ebner, a research fellow specialising in the far right at the Institute for Strategic Dialogue think-tank in London. “They are playing a very long game, and targeting the next generation.”

As in France, it’s a strategy that has seen right-wing political parties in Spain, Denmark and elsewhere field candidates in their late twenties high on the slate, seeing young white male voters in particular as their path to greater power. Figures such as 26-year-old Belgian Dries Van Langenhove helped Belgium’s right-wing Vlaams Belang to its best-ever showing in simultaneous May regional, national and European elections.

There are limits to the trend. Even amongst young men, far right parties still often struggle to get much more than a third of the vote. Geographical support remains patchy. As they become more radical, parties can shed moderate followers even as they gain new ones – Alternative for Germany may be rising in the country’s more economically marginalized east, but it appears losing support in richer western areas. Female voters remain particularly sceptical – prompting growing discussion in right-wing circles over how to win them over.

Van Langenhove, Bardella and others are part of an increasingly sophisticated continent-wide movement, tying together social media, real-world demonstrations and rallies and a single-minded determination to seize political office. Well- resourced campaigns include “Generation Identity”, a largely youth-facing movement that began in France but has also seen its popularity grow in Austria, Germany, Italy and elsewhere.

It’s a sign of how increasingly coordinated such movements are – perhaps ironic, given their often nationalist agendas.

Many take explicit encouragement from both U.S. right-wingers and white supremacists as well as Russian President Vladimir Putin, seen by many on the right as what a national leader should be – ruthless, macho and untroubled by principles such as human rights or political correctness. Such groups and their leaders are also often the main beneficiaries of suspected Russian hacking, trolling and other online activity, supporting the suggestion that the Kremlin would like to see a more fragmented, right-wing dominated West.

Far-right messaging – which includes online videos – is widespread and varied, not all of it branded to associate with the far right. Behind talk of the need to confront Islamist fundamentalism and protect women’s rights, however, is a wider message – that mass migration and multicultural liberalism are destroying Europe, and only the right can stop it.

Right-wing governments in Hungary and Poland shine a light on what the far right might look like in office – more state media control, rhetoric against not just migrants and foreigners but other minorities such as the lesbian, gay, bisexual and transgender community. Many supporters, however, would like to go further – online discussion of “re-migration” includes not just repatriating new arrivals, but deporting families who have spent generations in Europe.

Such arguments risk becoming not just a constant feature of European politics, but its defining theme for years or decades. That’s a truly terrifying prospect – and it is likely no coincidence that it has only become possible now that many fewer people have lived experience of the lessons of 1939.