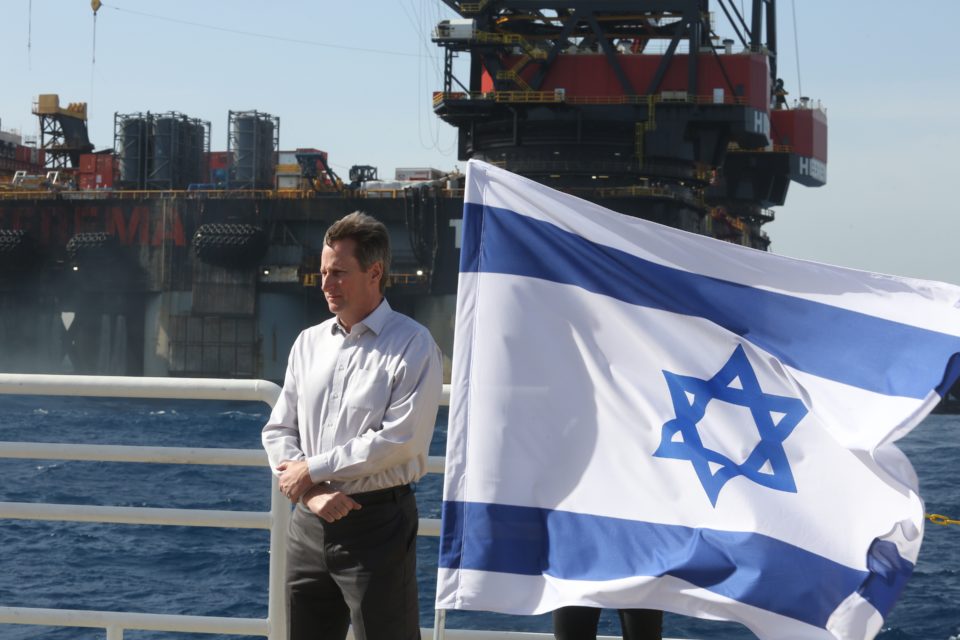 epa07333995 Vice President, Major Projects at Noble Energy George M. Hatfield at the Leviathan gas platform of Noble Energy at the Mediterranean Sea, some 10km from the Israeli coast, 31 January 2019, after the foundations of a 98-meter-tall and 15,500-ton-weighing metal structure (behind C) were lowered onto the sea bed from aboard a large barge late 30 January 2019. The platform will have its top structures installed during the 2nd half of 2019 and tested before the planned start of delivery of gas to Israeli customers at the end of 2019. EPA-EFE/MARC ISRAEL SELLEM / POOL

Since discovery of natural gas in its exclusive economic zone Israel has been dreaming of exports, riches and political influence. Massive political capital has been expended in this direction, but so far without results, apart from small exports to Jordan, and possibly Egypt, but not to global markets.

The giant gas-field Leviathan is expected to come on-stream by end-2019, with as much as 9-10 billion cubic metres/yr (bcm/yr) surplus gas available for export. Noble Energy and its partners have been considering all options to secure international buyers for this, but unsuccessfully.

The main challenge is commercial. Gas prices are low globally and even though they may rise after 2025, they are still expected to be at levels that challenge exports of gas from the East Med. For example, gas prices in Europe are currently just over $3/mmbtu (per about 1000 cubic feet) and are forecast to average $6-$6.50/mmbtu between 2020-2030. Political will is not sufficient to overcome price limitations, despite all the hype, either in Israel or in Cyprus.

East Med gas is mostly in deep water and deep reservoirs. This makes it expensive to develop. The lack of regional infrastructure also impacts the cost of exporting such gas.

The EastMed gas pipeline is one export option that has been receiving strong political backing by Israel, and also by the EU and the US. But it is a very expensive project. With the cost of the gas expected to be between $4-$5/mmbtu at the Leviathan wellhead, allowing for the cost of the pipeline, by the time such gas reaches European consumers it will be too expensive to attract buyers. That’s why so far it has not attracted any international oil and gas company (IOC) or investor interest.

The global energy world is very competitive, with a glut of supplies, and with cheap renewables and coal keeping prices in check. There is an increasing demand for liquefied natural gas (LNG), but not at any price.

These are the main challenges to most options of getting East Med gas to global markets, except perhaps through Egypt’s two existing liquefaction plants at Idku and Damietta, due to low liquefaction costs.

But Egypt has turned the corner. Not only it has become self-sufficient in gas, but it also has surplus for exports. Successful implementation of reforms, adoption of renewables and removal of fuel subsidies has led to substantial reductions in the increase in natural gas and electricity demand in Egypt, freeing gas for export. The country’s petroleum minister expects both Idku and Damietta LNG plants to become fully utilised by next year, exporting Egyptian gas. As a result, there may not be any room for Cypriot and Israeli gas at Egypt’s LNG plants, unless it is cheap.

Nevertheless, Israel has great expectations that it will export most of its surplus gas to Egypt, either for domestic use or for liquefaction and export. But can it?

The extent of the Israeli gas price problem is evident when one considers the price agreed between the Leviathan partnership and the Jordanian National Electric Company. This is reported to be $6/mmbtu – corresponding to a Brent oil price in the range $60-$70/bl. The price of Israeli gas arriving in Egypt is likely to be higher due to higher pipeline costs. That would make it uneconomical to liquefy and export it to Europe. By the time liquefaction costs, ship transportation and regasification costs are added, such gas will not be able to compete with longer-term gas prices in Europe (stated above). A glut of gas supplies is keeping Europe well-provided and gas prices down.

The exception may be the deal between Noble Energy and Delek with Egypt’s Dolphinus Holdings. This is a commercial deal between private companies and may still go ahead. It has so far been experiencing problems and delays, but Delek is confident that these can be overcome.

Other potential options that have been considered by Israel are use of floating LNG (FLNG) or construction of a land-based LNG plant on the Red Sea coast of Sinai. But both are dogged by similar commercial challenges.

Unless the cost of producing and exporting Israeli gas is brought substantially down – perhaps by the companies reducing their profit expectations and the country being prepared to reduce taxes and royalties – it risks remaining stranded. Or most likely, remain available for domestic consumption, ensuring Israel’s longer-term energy independence.

This is one of the reasons why two offshore licensing rounds launched by Israel ended-up with disappointing results in terms of attracting any major IOC interest.

A glimmer of hope

Unless ways are found to reduce costs substantially, Leviathan gas, or any other Israeli gas, will not become a game-changer for Israel’s exports.

Similar challenges apply to exporting Cypriot gas, which I have covered in recent articles in the Sunday Mail.

But there is a glimmer of hope, both for Cyprus and Israel, and it is an idea close to my heart – the construction of a liquefaction plant at Vasilikos in Cyprus. This idea was first considered in 2012/2013 but the opportunity was missed. A world-scale plant – taking advantage of the most recent liquefaction technology – producing 15+ million tonnes per annum (mtpa) of LNG could bring unit liquefaction costs sufficiently down to give it a commercial chance. But this would also require the cost of gas arriving at the plant to be low.

Such a plant would need to have access to 400-600bcm gas. This could be achieved if available, and to-be-found, Cypriot and Israeli gas reserves are combined.

In the past ExxonMobil expressed interest in considering such a plant, provided sufficient quantities of gas are discovered and global gas prices make it viable. This would also require an integrated project, combining all components from wellhead to export, to minimise costs. The likely markets will be in Asia, where there is a price premium over Europe.

A tall order? Possibly, but it is a glimmer of hope – one of the few remaining options to export East Med gas.