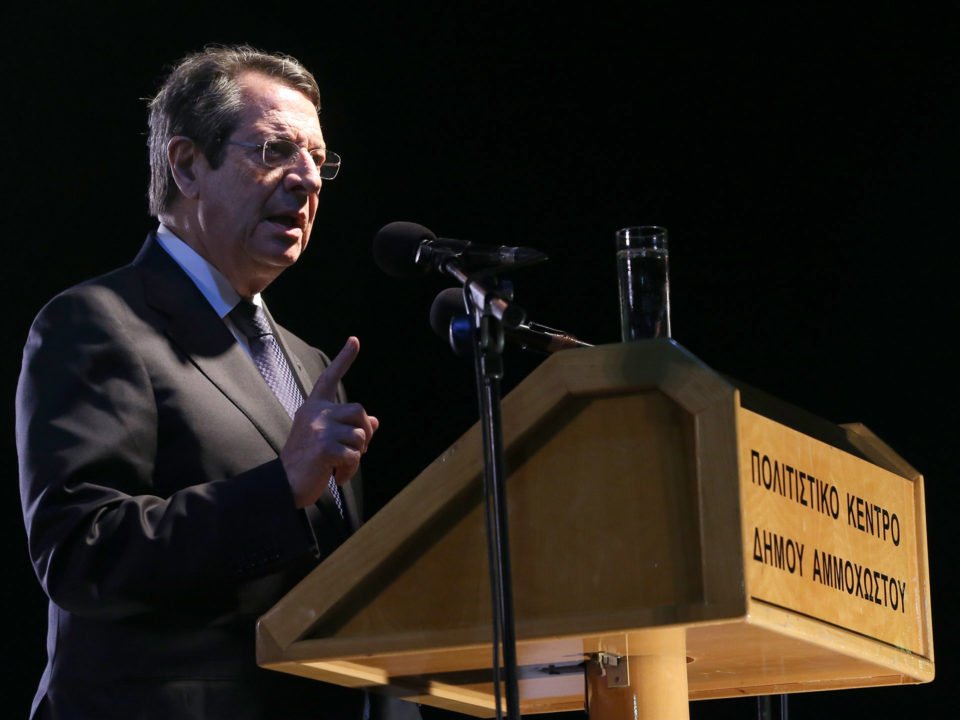 President Nicos Anastasiades has pledged to use every diplomatic means at his disposal to raise awareness abroad of the Turkish side’s plans to open up Varosha, the fenced-off area of Famagusta in violation of UN resolutions.

Speaking at an event late on Saturday in the government-controlled part of the Famagusta district, Anastasiades said Turkey’s “challenges” as regards Varosha would not go unanswered.

“I will use my presence in the United Nations, I will use my intervention in the UN, I will also have a meeting with the representatives of the five Permanent Members of the Security Council, and with the UN Secretary-General, while at the same time European leaders have been informed and I have requested it be I will be on the agenda of the European Council in Brussels in October,” he said.

“We will do our best to protect the city that has been waiting for 45 years not for new settlers, but for its residents,” he added, saying he hoped there would be a ray of hope that Turkey could understand the meaning of international law, not only as laid out in the UN Charter but also in the EU acquis.

“Unfortunately, we have all witnessed lately the unacceptable actions and challenges, in violation of international law and relevant UN resolutions, by the Turkish leadership and some others acting on their behalf within the Turkish Cypriot community,” Anastasiades said.

He was referring to Turkish Foreign Minister Mevlut Cavusoglu who said on Thursday Ankara was going to open Varosha. Cavusoglu visited the fenced-off area last Monday during a visit to the north. He was taken there by Turkish Cypriot ‘foreign minister’ Kudret Ozersay who kicked off the opening of Varosha by bringing in a number of delegations inside the ghost town in recent months.

Anastasiades said this, and Turkish drilling in Cyprus’ exclusive economic zone (EEZ) were actions that should not leave the international community, nor the EU indifferent.

He said that in March 2016 at a meeting he had with then Turkish Prime Minister Ahmet Davutoglu on the sidelines of a European Council meeting, that he set two conditions to secure Cyprus’ consent to the opening of Turkish EU accession chapters.

These were the establishment of an international commission to prepare a study of the prevailing situation in Varosha with a view to the return of its legal residents, even under the administration of the UN, and the opening of Turkish ports to Cyprus’ air and sea traffic, under ban since 1987.

“And this proposal was rejected,” Anastasiades said.

In addition to this, he said in January 2017, “perhaps the most important of the convergences we had achieved”, was the submission of maps by both sides, and based on the map submitted by the Turkish Cypriot side, the city of Famagusta and the wider Famagusta region was to be returned under Greek Cypriot administration.

On the Cyprus talks, Anastasiades said Turkey, as was evident by Cavusoglu’s statements, was attempting to hinder the two leaders in trying to reach an agreement on terms of reference that would allow negotiations to resume.

“Recent statements by the Turkish foreign minister demonstrate Turkey’s intentions,” the president said. “It’s not just the actions, it’s not just the statements, it’s also the challenges that are seen every day.”

“Therefore, it is not a question of whether we have good will or good intentions or determination. It is what the other side is doing to wreck the new effort.”

”We are ready with logic and with mutual respect to negotiate with our Turkish Cypriot compatriots in order to find that solution that will enable the functioning of the state and thus the viability of the solution.”

He said the Greek Cypriot side had put forward proposals for all six points of the UN Secretary-General’s parameters. “Turkey has put forward a single proposal, to continue the guarantees and the permanent presence of the occupying army,” Anastasiades said.

Rain and isolated storms expected in the afternoon