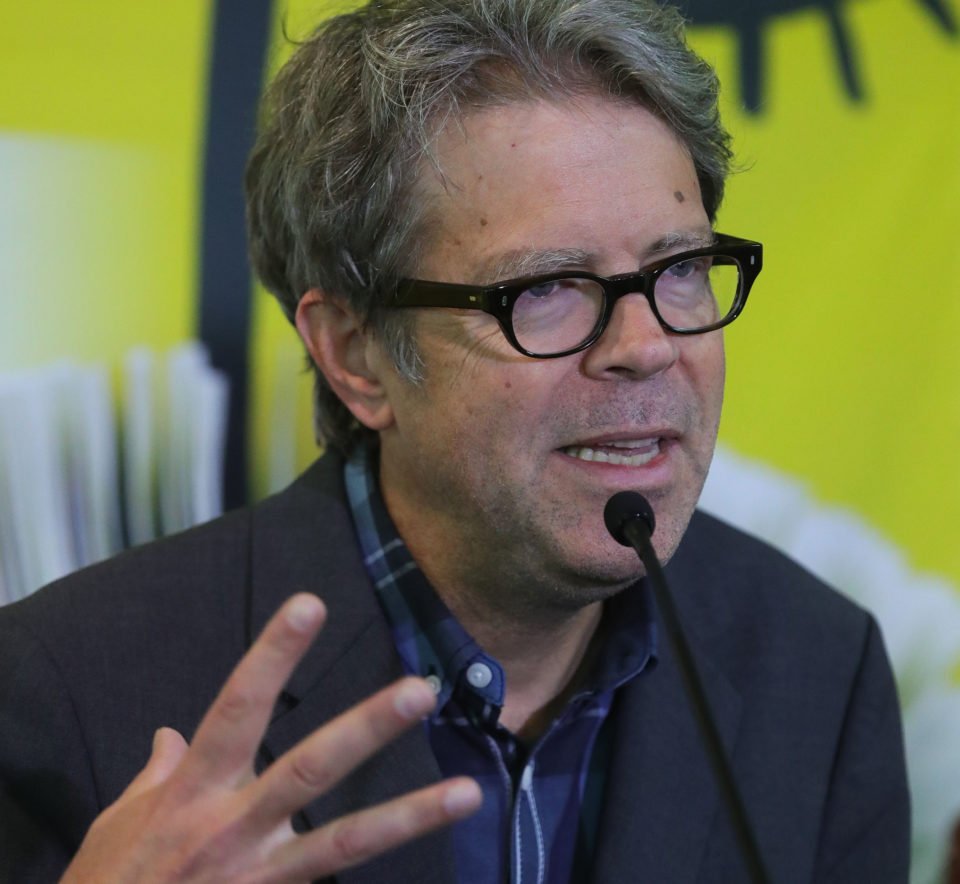 epa06903430 US writer Jonathan Franzen participates in a press conference in a hotel in Lima, Peru, 21 July 2018. EPA-EFE/Ernesto Arias

Jonathan Franzen has finally seen the light. Unfortunately, it has blinded him.

The distinguished American novelist and essayist has a piece in the current issue of The New Yorker entitled ‘What If We Stopped Pretending?’ Stopped pretending that the climate apocalypse is not going to sweep us all away, he means. As he writes: “to prepare for it, we need to admit that we can’t prevent it.”

It’s very elegant, philosophical – Marcus Aurelius-lite. Yes, we have wasted thirty years and not cut our global emissions at all. Yes, we are heading for the ‘never exceed’ average global temperature of +2̊C. And yes, that means there will be famines, huge waves of climate refugees, a lot of killing at borders – and then it will get really serious.

So far I’m with Franzen all the way. In fact, I know exactly how he feels, because I got there about a dozen years ago and I felt awful.

I had spent a year and a half interviewing everybody you ever heard of in the climate field (and many you haven’t) for a book I was doing, and at the end of it I had a kind of double vision. Not a physical double vision, of course, but overlaid on current reality I could sort of see the hell that was coming.

That kind of thing can ruin your breakfast, so I manfully set the visions aside and got on with my life. Maybe Franzen will get over it too, eventually, but at the moment he thinks we’re doomed, and all we can do is little things to slow the apocalypse down a bit and relish the brief time we have left.

“It’s fine to struggle against the constraints of human nature, hoping to mitigate the worst of what’s to come,” he writes, “but it’s just as important to fight smaller, more local battles that you have some realistic hope of winning. Keep…trying to save what you love specifically – a community, an institution, a wild place, a species that’s in trouble – and take heart in your small successes.”

We really shouldn’t be surprised that he thinks like this. Franzen’s Wikipedia entry (I take my research seriously) say that he was heavily influenced by Franz Kafka and Albert Camus, so stylish despair is his default setting. But it’s not time yet to give up on the big things, like survival.

First of all, change your perspective and stop deploring the human race’s failings. A million years ago, our ancestors were clever apes. Even ten thousand years ago, they were all hunter-gatherers who had little time or motive to worry about the longer term. Don’t write us off because we’re still not very good at it.

Now we’re in really deep trouble, and our evolutionary baggage means that we’re still having difficulty even in acting to avoid disasters that are only a decade or two ahead. We may be able to rise above it when the crisis becomes present and palpable, but the procrastination, the disbelief and the delays were inevitable.

In fact, it’s a safe bet that if there are other intelligent species who have recently built high-energy civilisations – and there probably are, given 400 billion stars and two or three times as many planets in this galaxy alone – then they will doubtless be facing similar planetary crises, and having to deal with evolutionary baggage of their own. Any intelligent species is bound to have knuckle-dragging ancestors up its evolutionary tree.

So here we are, and it’s going to be tricky. We are almost certainly going to crash through 450 parts per million of carbon dioxide equivalent in the atmosphere in less than fifteen years, which in the natural course of events would take us up through +2̊C about a decade later. Welcome to the climate apocalypse.

Unlike Jonathan Franzen I do talk to climate scientists, and it’s hard to get them to say this on the record. They don’t want to sow panic. But if you back them up against a wall and threaten them with a knife, most will admit they think going beyond 450 ppm is nearly inevitable now – mainly because human politics can’t change fast enough to stop it.

But what the climate scientists all know, and some think might save us, is that 450 ppm and +2̊C are not indissolubly linked. What we need is more time, and it is theoretically possible to hold the global temperature down while we work frantically first to get our emissions down, then eliminate them entirely, and finally draw down the excess CO2 that we have already put into the atmosphere.

There are a number of potential methods for doing this, all of them controversial. The leading proposal at the moment is injecting sulphur dioxide gas into the stratosphere. (No living things up there.) That would reflect a small portion of incoming sunlight and keep the planet below +2̊C and its attendant calamities for the time we need.

There are no safe and painless courses left, but there are still choices to be made. The game is not over.

The book I wrote is called ‘Climate Wars’, it’s still in print (at least in English), and unfortunately almost every word in it is still true